By Susanne, In Elliott, Family, Friends, Selah With 2 comments

Re-live our summer with us through pictures! 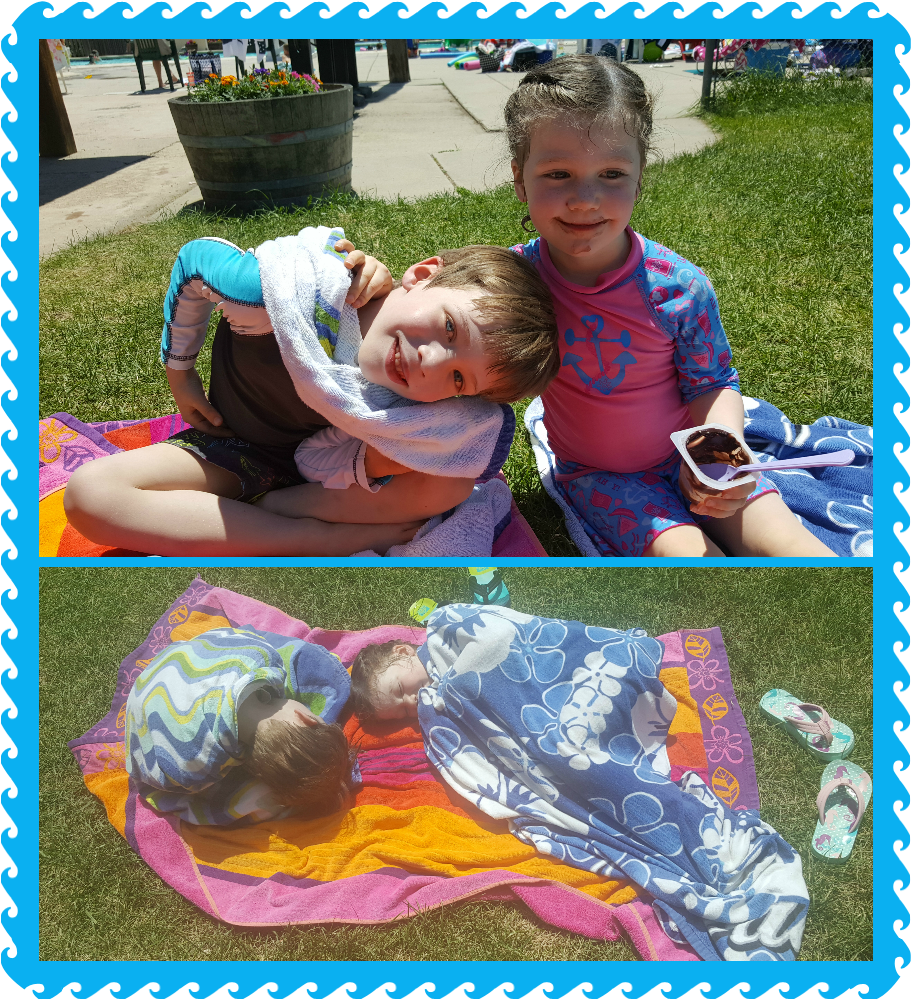 A pool party with our spanish class! 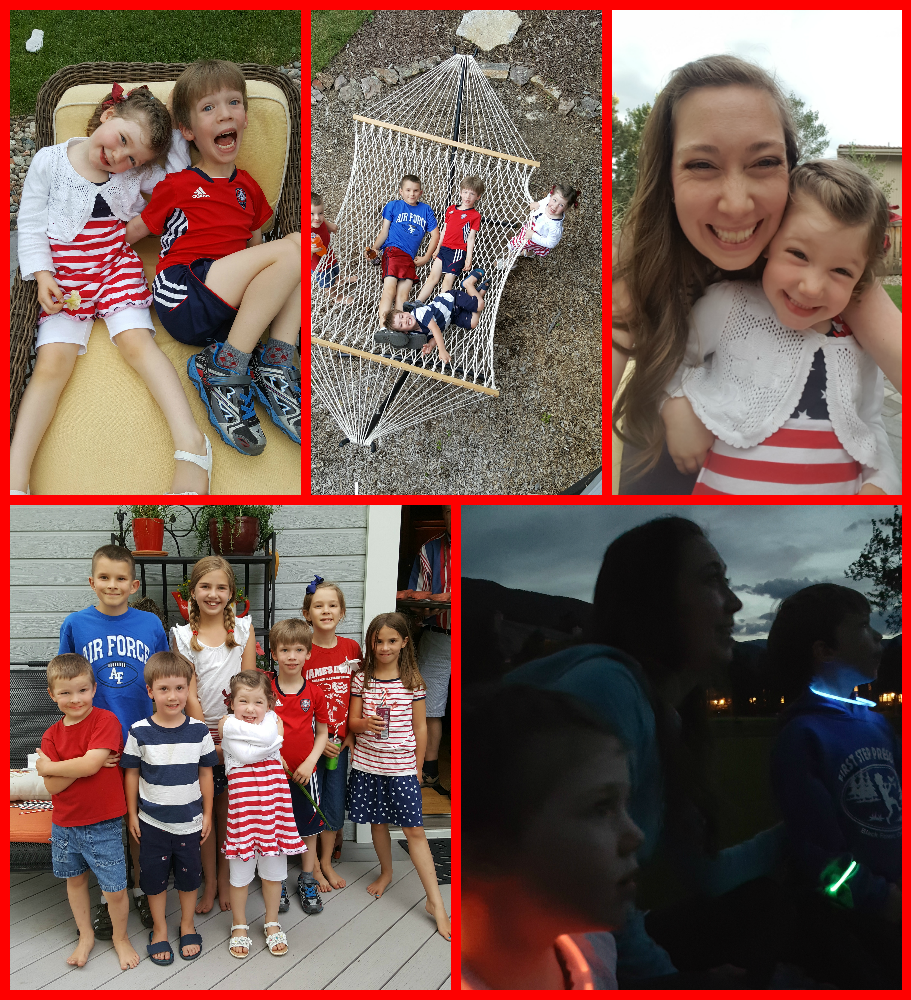 The fourth with some of our very favorite friends! 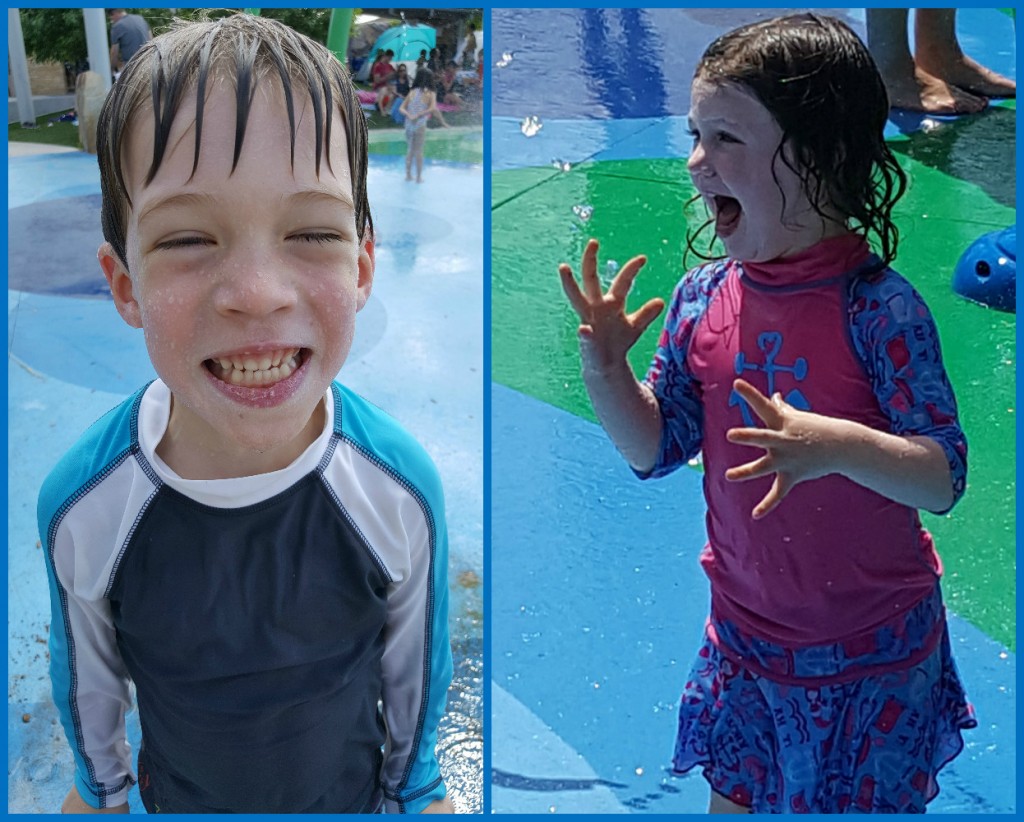 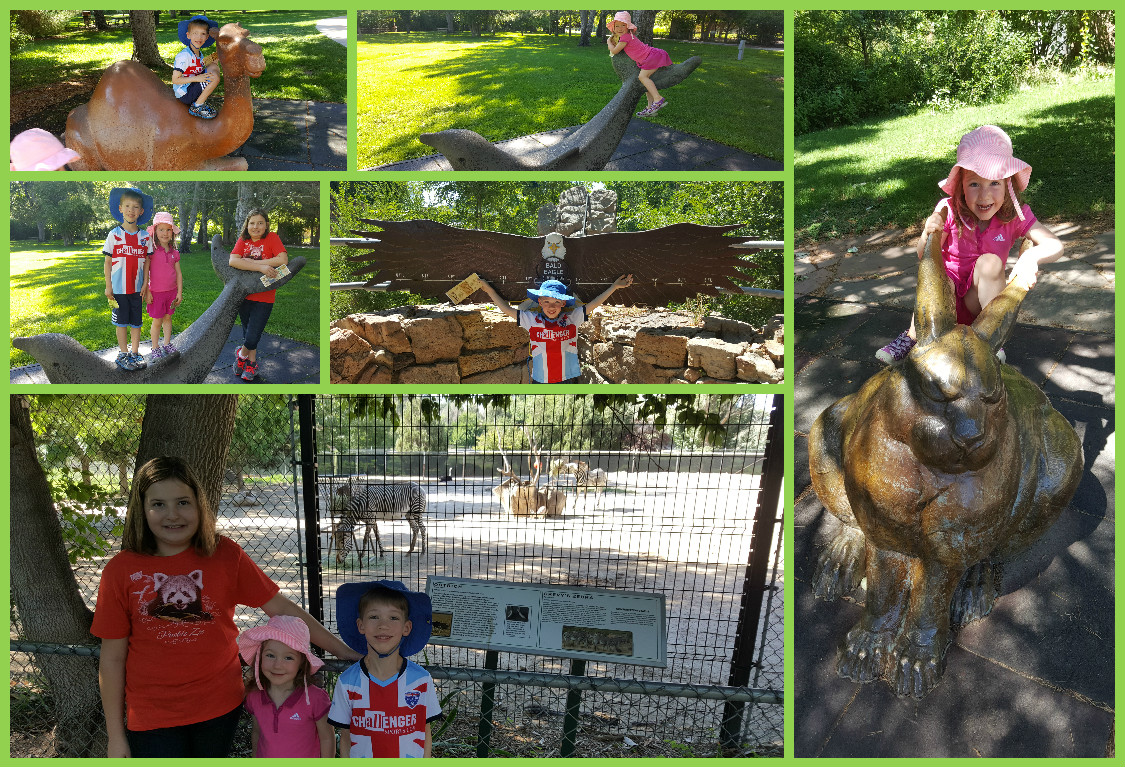 Our sweet friends treated us to a trip to the Pueblo Zoo! We had never been and it was so much fun!

The Pueblo Zoo also held another first for us…our sweet Selah got stung by a bee for the very first time…TWICE! I know that’s not technically possible…we think it must have gotten stuck under her skort, tried to sting her once but didn’t get its stinger out and so it tried to sting her again. So two pokes, two welts, and one very sad (and angry!) little girl. I was standing about 2 feet away from her when she screamed and when I ran to her she angrily yelled, “A bee just STINGED me!!! HE STINGED ME!!!!!!!” So mad, so offended. As I was trying to comfort her, she screamed again a minute later and that’s when I started trying to rip her clothes off of her and this little (probably angry and scared!) bee flew out from under her skirt. 🙁 It was slightly traumatizing for a few minutes there but if you look at the picture of her sitting on the giant bunny on the right hand side of the zoo collage…that’s her about 15 minutes after it happened…so needless to say, she survived :). 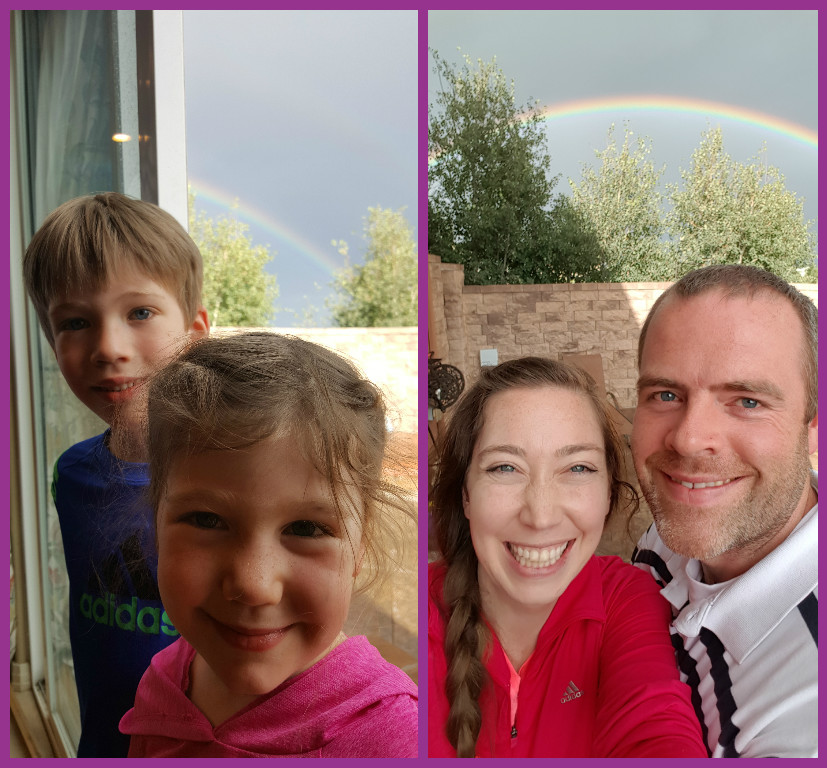 Rainbow! (In other words, we had tons of rain this summer, just like how I remember Colorado while growing up. It rains virtually every afternoon in the summer. And we also got some intense hail storms which a number of interesting stories to go with them!) 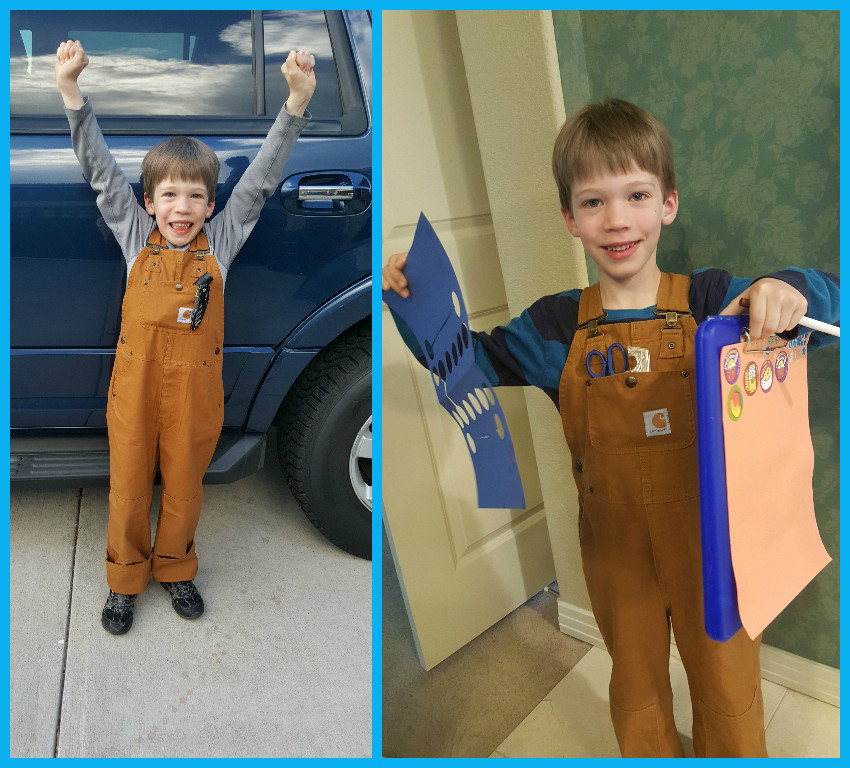 Brian got Elliott these “real man” working overalls just as summer was starting, and he loved them so much that he almost didn’t take them off the entire summer! Chances are, if you saw him this summer he was wearing his favorite blue striped shirt and these overalls! Filled with crafting supplies :). 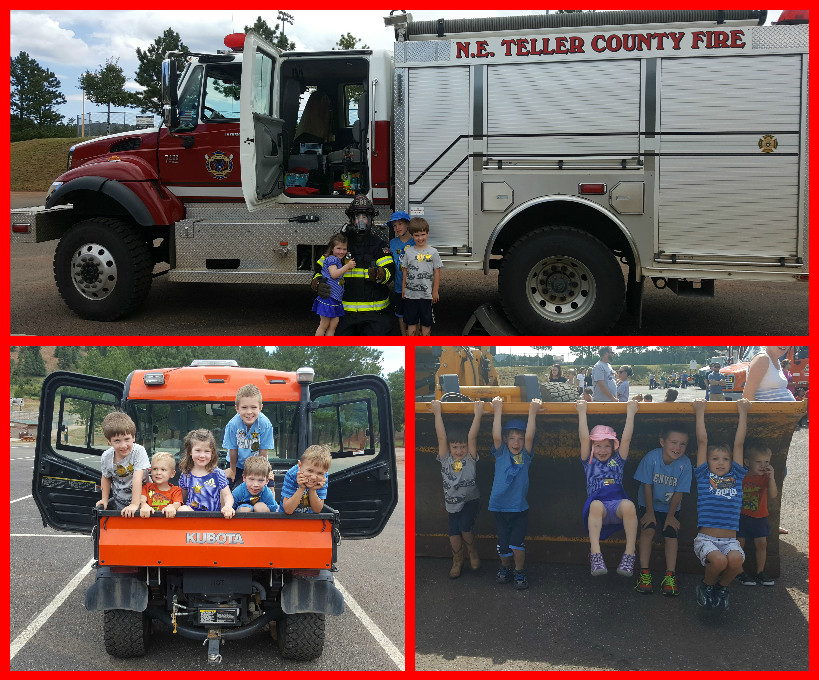 We went to this awesome truck event with some awesome friends! 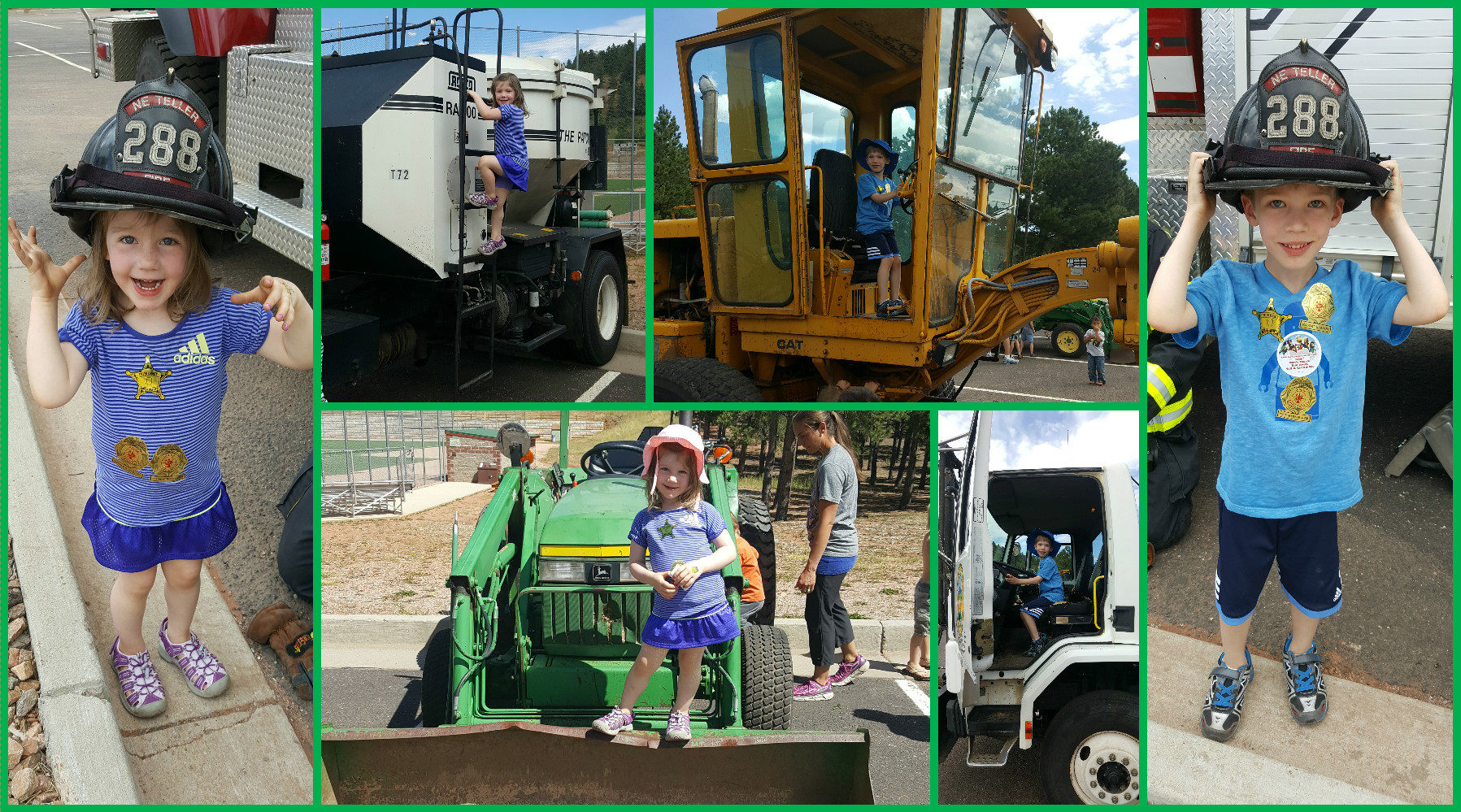 The kids got to sit in, climb on, and pretend to drive all sorts of police cars, firetrucks, ambulances, school buses and working machines! 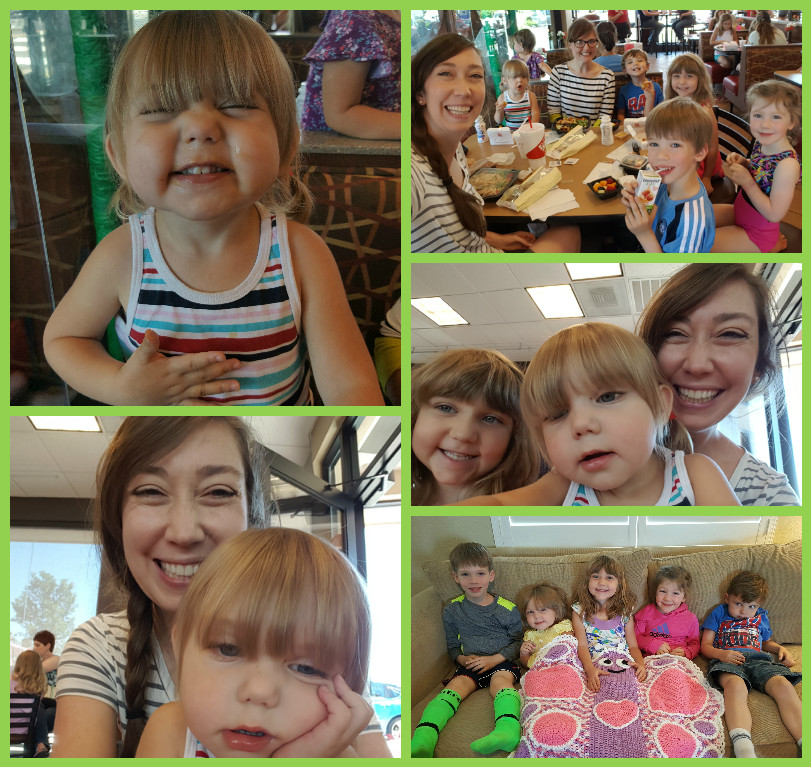 We had this hilarious day where we had no water and everyone in the neighborhood was flipping out. We came home from church to a news reporter, begging us to go on camera to explain to the city about how awful it was to be without water for 3 hours. We politely declined complaining about such a “horrific” #firstworldproblem, but when she begged us to at least get a shot of our sink filled with dirty dishes, we consented. Oh, the horror. Haha! 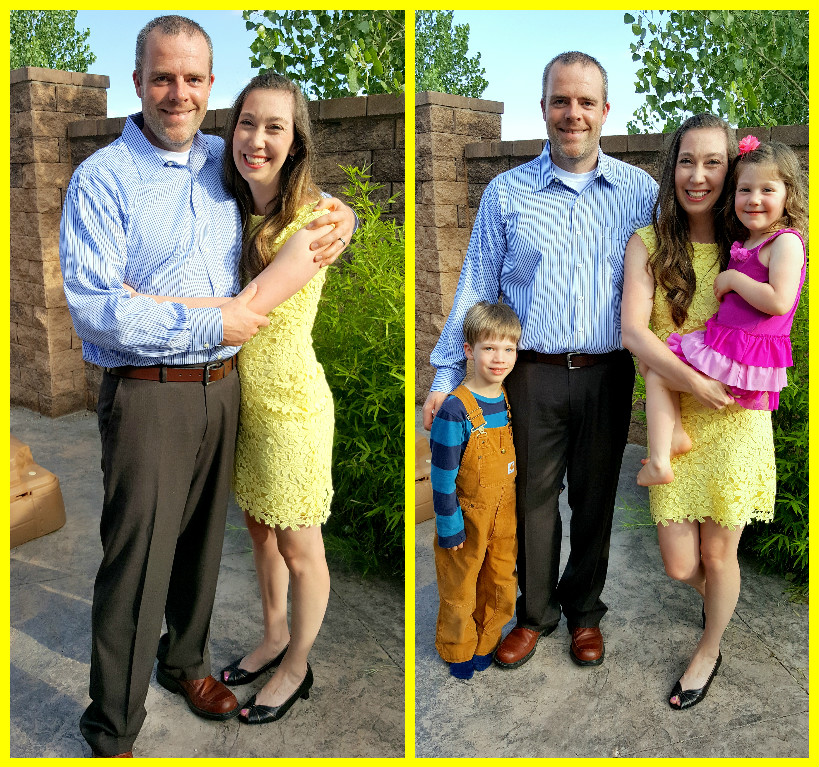 We celebrated 7 years of marriage!

This big man has been reading like crazy and completed a set of readers. He wanted to celebrate by going to one of our favorite breakfast places because kids get to put together a little cardboard animal! 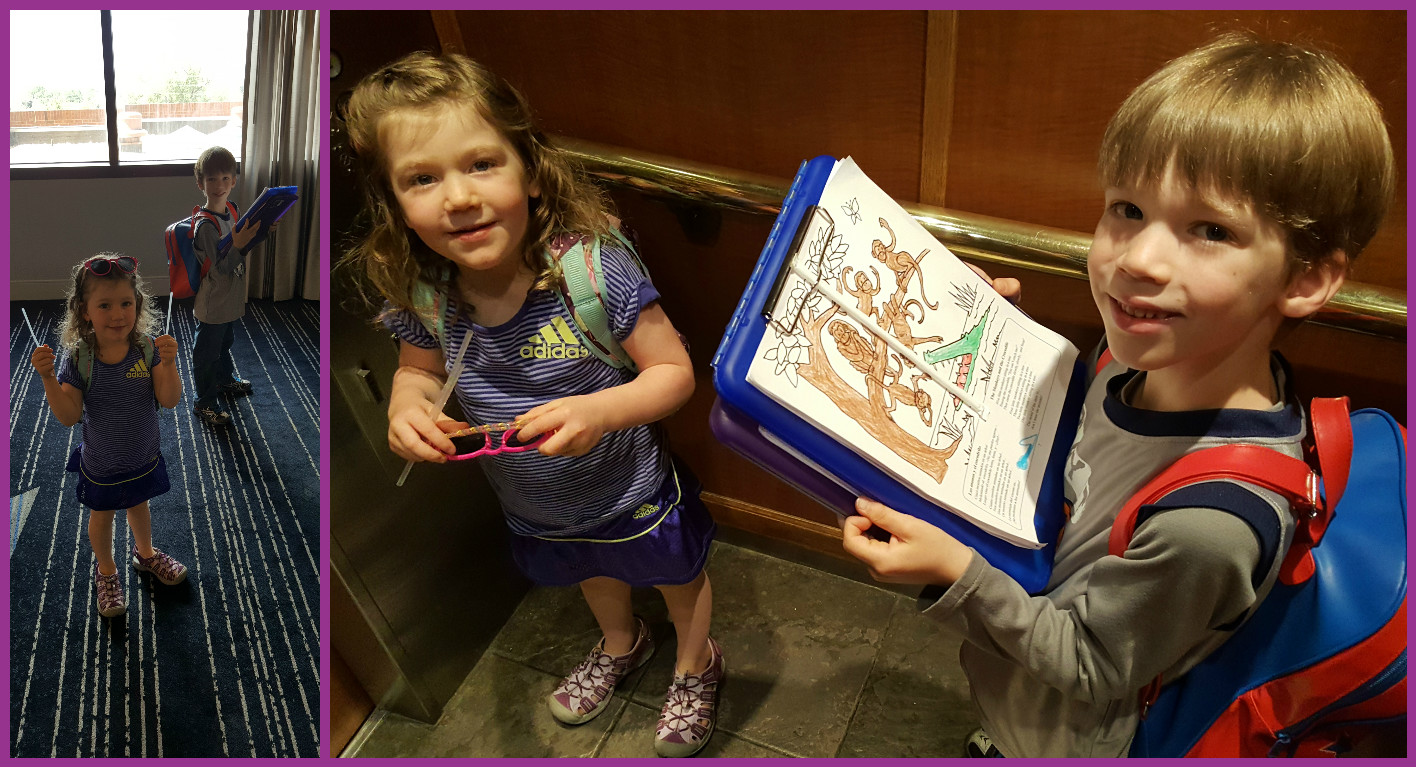 Our “big” vacation this summer…a quick overnight in Denver :). But the kids were thrilled to get to stay in a hotel!

Elliott did a super fun soccer camp and just had an absolute blast! He is totally in love with his shin guards and literally wore them all day for the entire week of his camp. 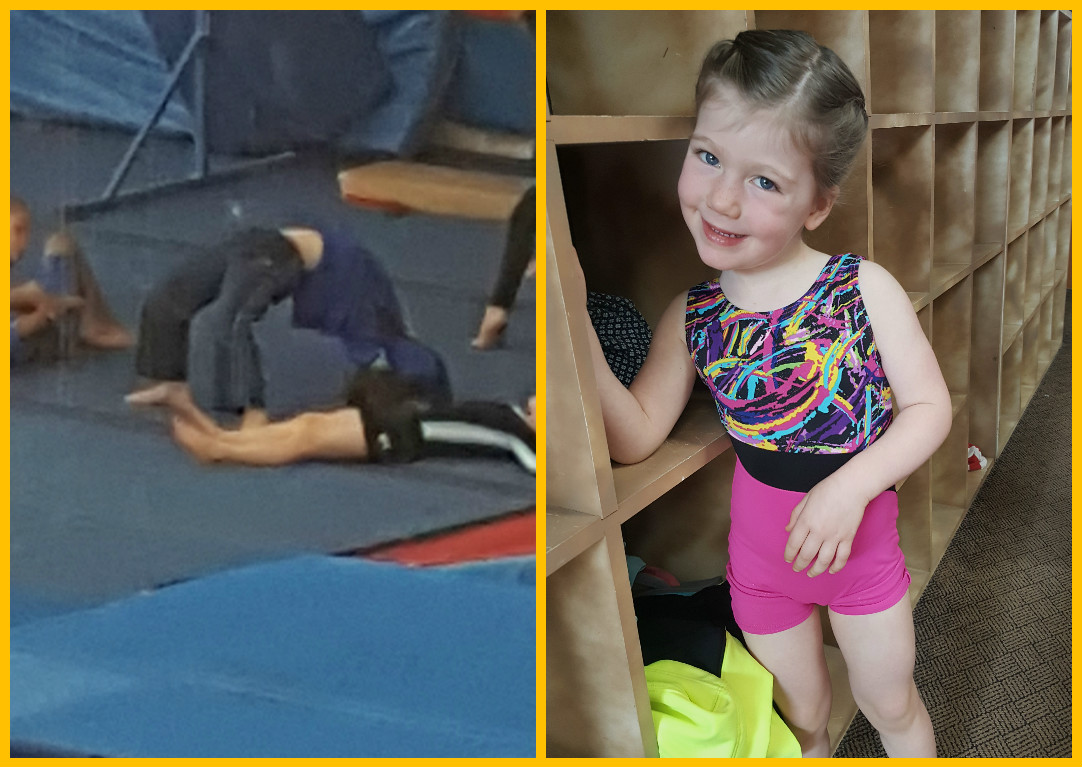 Elliott tried out a gymnastics class just for fun (see him doing a bridge on the left there?) and Selah moved down to the BIG girls gymnastics class! (More on that in another post!)

Two dear out-of-town friends graced my presence this summer, one all the way from England and the other from the distant land of Tacoma :).

Our neighborhood fitness center was offering the cheapest swim lessons in town! Aaaand, I’ll just say, we got what we paid for and leave it at that :).

One of my main goals this summer was to teach the kids to swim. Every Mama can probably relate to this, but I have just not been fully comfortable around water with the kids since they haven’t known how to swim. Selah is so fearless when it comes to things like the water that I’ve been particularly concerned about her. One time when she was 2 she jumped in the water without asking. She sank straight to the bottom and thankfully Brian was right there to pull her out. When we spoke very seriously to her about how she could never do that again, how she doesn’t know how to swim, etc., etc., she just burst into tears, shouting, “BUT WHYYYYYYY????!!!” So. You can see why it’s been a priority in my mind.

When I quickly realized that the cheap swim lessons weren’t going to do the job, I googled, “How can I teach my kids to swim?” I came across a video which at least helped point me in the right direction, since teaching a child to swim comes about as naturally to me as teaching someone to sky dive. But after watching the video, I went from saying, “I have no idea how to teach our kids to swim!!!” to being 100% confident I could do it myself, thanks to the nice man on the video telling me I could :).

That is…until I actually started TRYING to teach the kids to swim! HA!! The first step was simply getting them to take a deep breath to go under water. And every time I told them to take said deep breath and dunk their heads under the water, THEY BREATHED OUT. It was the most hilariously disfunctional scene you’ve ever witnessed… “Okay, kids! Take a big deep breath and go under water!” With huge smiles on their faces, they blew all the air out of their lungs, into my face, and dunked their heads under the water…gasping for air as they came up half a second later.

Sigh. Needless to say, I basically gave up and told Brian I had officially allotted him the task of teaching our children to swim. Well, it was only a matter of weeks until Brian and I (together) taught our kids to swim! What, what!!! Go us!!! I am seriously so proud of ourselves…we taught the children who couldn’t breath in before diving into the water…to swim :). 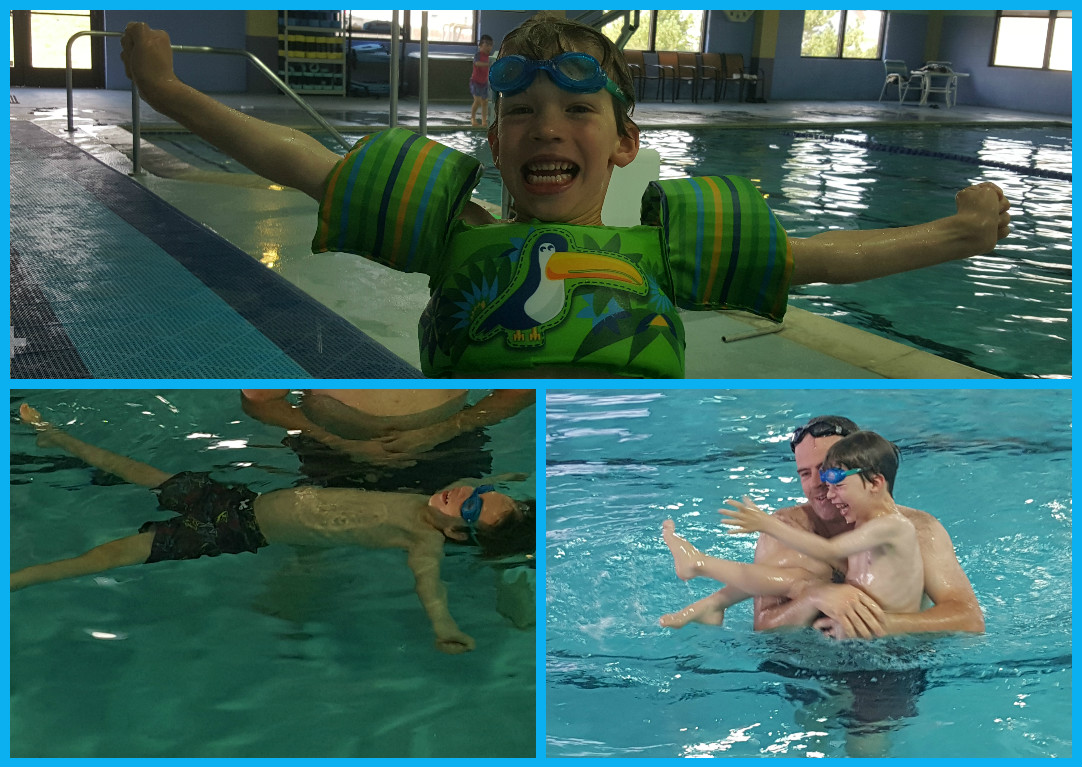 We still let them have a lot of fun with floaties whenever they want to, but these kids are swimmers and floaters! 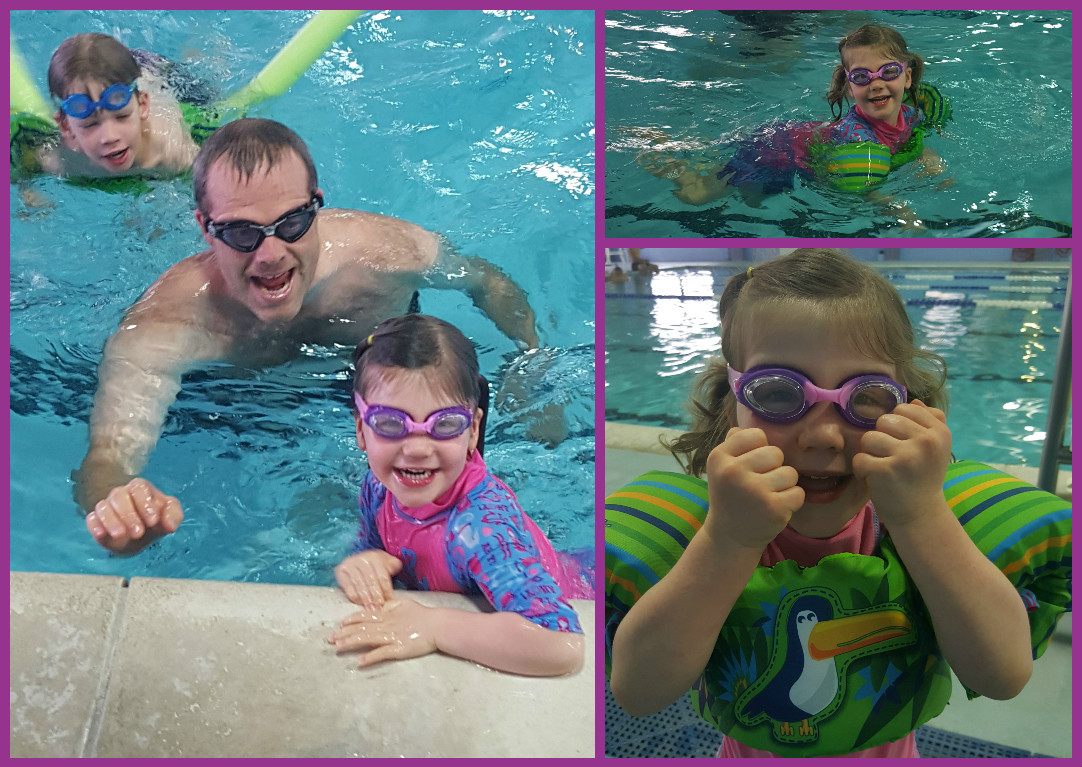 Selah is like a dolphin in the water…she’s always loved the water but she’s truly a natural at swimming.

Both kids can swim from one of us to the wall; jump in and swim back to the wall; jump in and swim to one of us; and do a “starfish” (float on their back) for a long time. Elliott also just learned how to jump in, tread water, and get into a starfish position. So although they’re not QUITE ready for the Olympics 😉 I feel a whole lot better about them being around the water!!! Granted, they still aren’t very good at taking a breath before going under water 🙂 but at least we’re making progress!! In one of the videos you can see our relentlessly silly Selah trying to make the swim task more challenging by covering her goggled-eyes while swimming to Brian! HAHA!! That girl of ours!!! Enjoy some snippets from one of our swim days!