By Susanne, In Selah With 6 comments

Meet Selah at one year old: 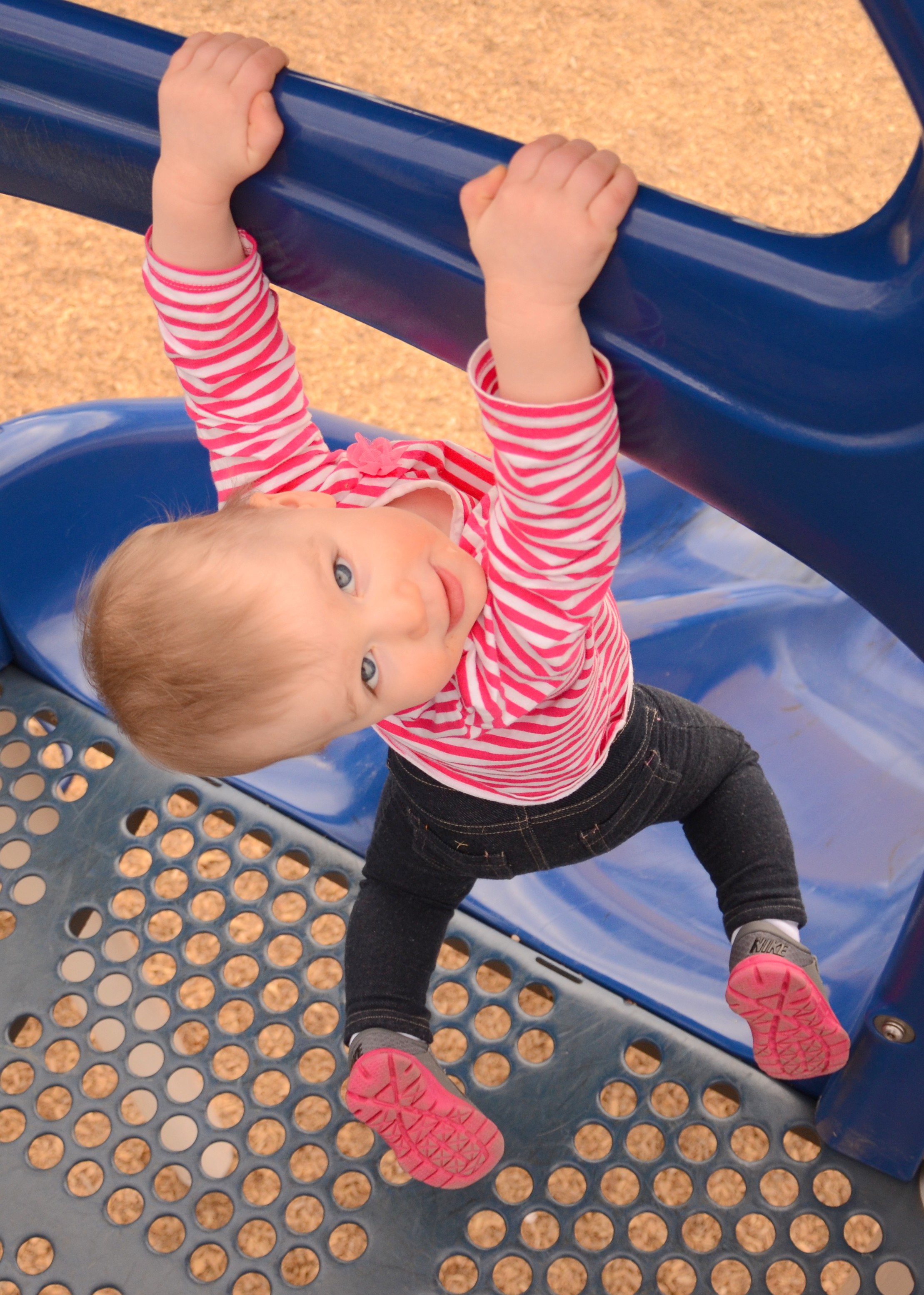 From what I recall, this might have been the very first time she was on a playground that had something that was “hangable”. I remember that she RAN towards that slide, grabbed onto the top part, and turned into half monkey ;).

Actually, she’s always been part monkey. Crawling at 6 months, climbing up onto things and standing supported at 7…she’s just always been our little monkey. She loves to HANG and SWING and CLIMB. So just before she turned two, we took a “Mommy and Me” gymnastics class, and I’ll never forget the first time she saw those bars and just RAN over to them to let her monkey self free.

Fast forward two years…and it is still clear that she and gymnastics are like peanut butter and jelly. They just go together. We don’t know how long she’ll love it, but for now she does and so we’re letting her have a hay day.

Shortly after she turned 3, she learned how to do a pull-over all by herself.

So we sat and sat and sat on the decision…for 8 months. As much as I do think she’s a natural gymnast, she is also a GOOFBALL and the silliest little girl that ever existed. I was concerned the class would be too challenging and not enough fun. I’m CERTAINLY not in a hurry for her to grow up!!!! There’s PLENTY of time for that later!!!

But finally in July it felt like all of the pieces fit together just right and I felt a lot of peace about moving her to the great, big, unknown “downstairs” gymnastics class. And wow…WOW…has she thrived!!! There is still PLENTY of fun being had by this little 3 year old and I am honestly kind of shocked at how well she is thriving down there.

We have always had a rope for our basement jungle gym, but when she moved to the big girl class, we replaced our rope with a thicker, more-climbable one so she could actually climb it (our thin one wasn’t really climbable we realized). She was instantly enamoured with the idea of climbing our new rope, and she practiced ALL the time for a few days until she finally could climb it to the top! We were (obviously) SUPER impressed, and then we challenged her to climb it to the top, climb down, and without touching the ground to climb it back up to the top. So one night after doing that about 400 hundred times in a row, I casually said, “So, for your next challenge, you should try climbing the rope and then doing a pull-up.” Of course, I was thinking maybe she’d give that challenge a shot in the next day or two, but without hesitating, she LEAPT off my lap and jumped up onto the rope and DID IT!!! I just can’t believe her strength.

In her new class, they do some strength exercises along with skills. She climbs the rope (it’s two stories high!!!), does stomach leg lifts (hanging from a ladder with her back to the wall, she pulls her feet up to her face), pull-ups and jumps onto mats. 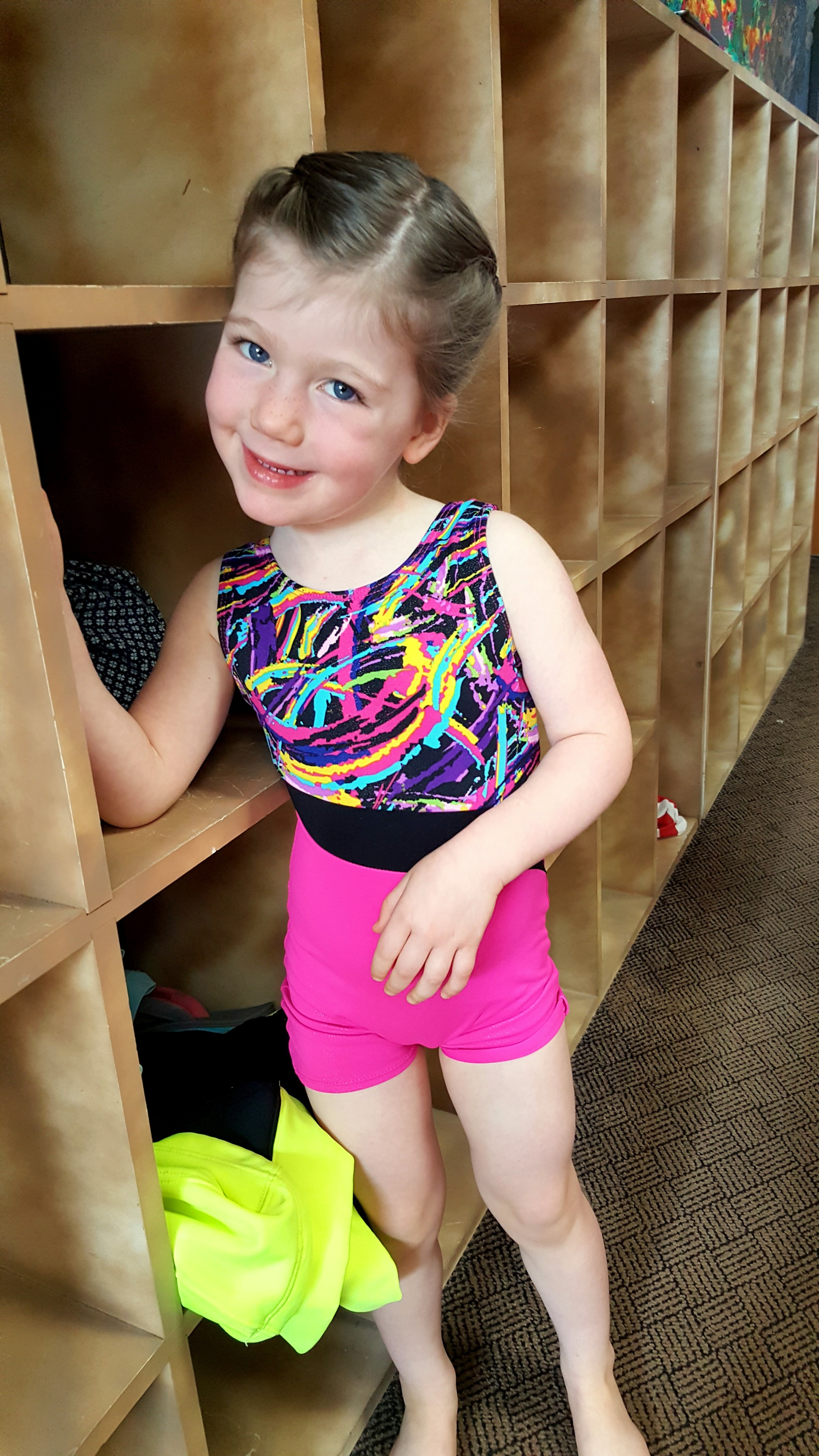 Here she is on her very first day!!! 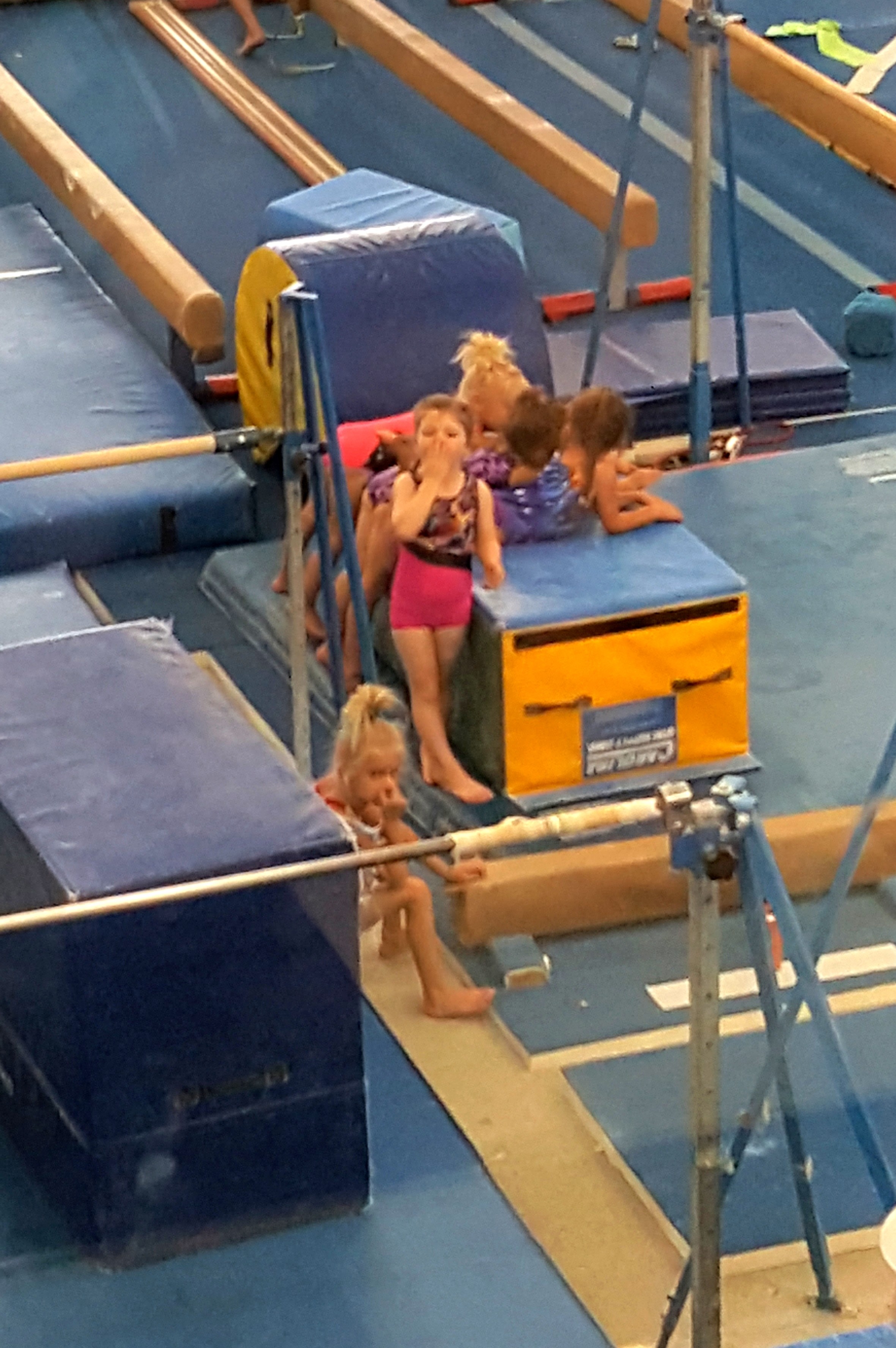 Blowing me a kiss on her first day!

She loves every bit of it, and has gotten A TON of “Wow Cards.” Although a “Wow Card” is just a piece of paper that lists her accomplishment, it is practically a gold medal in these girls’ sights.

On Elliott’s first day of school, she climbed the big rope halfway to the top. She got a “Wow Card,” and we celebrated! 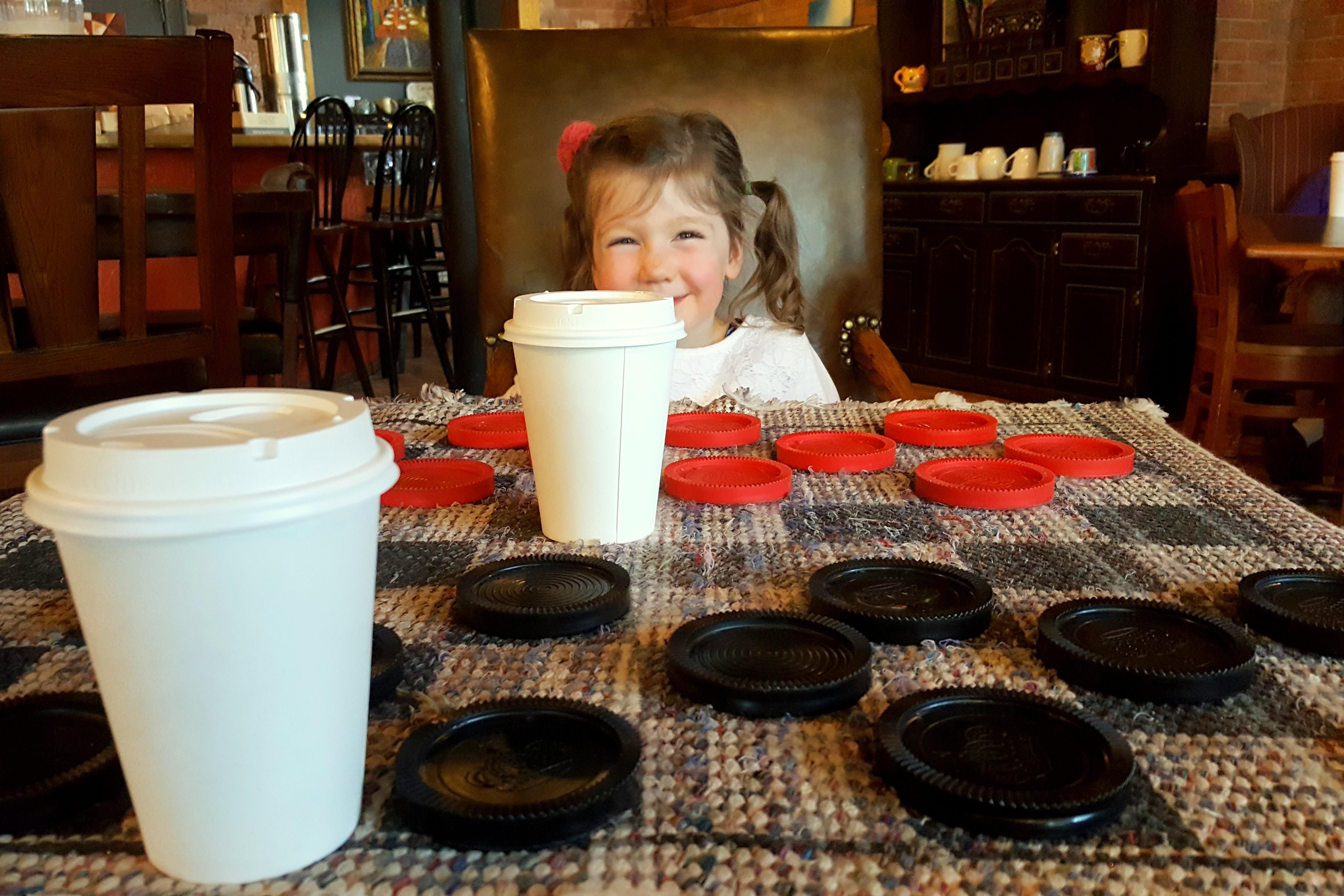 Hot cocoa and a game of checkers!

Just two days later, she made it all the way to the top!! That was a BIG accomplishment!! 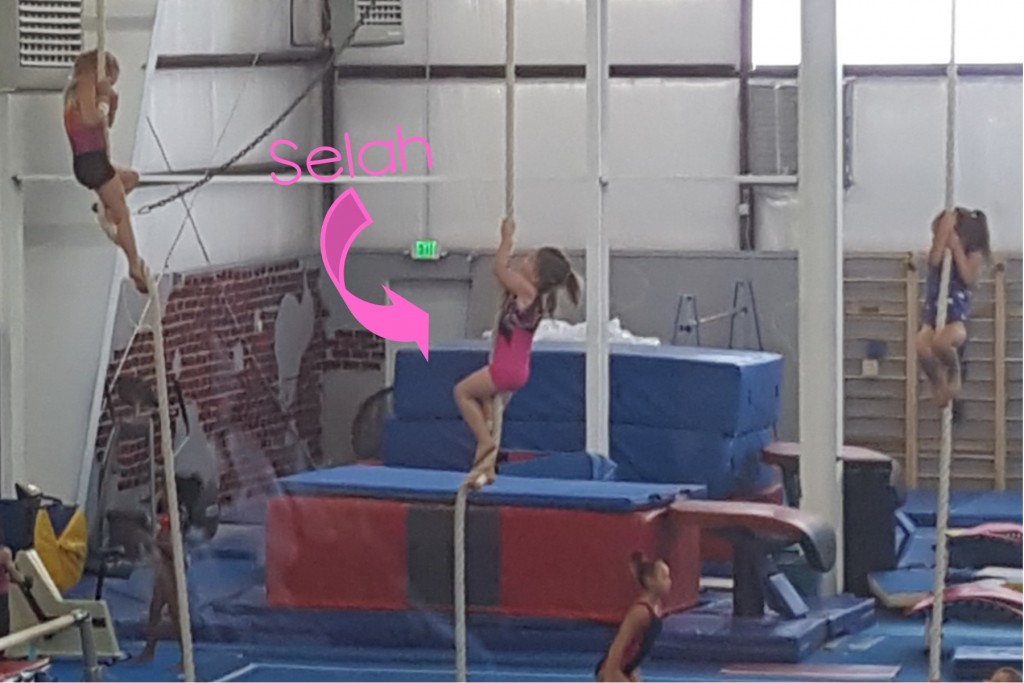 Although she’s gotten tons of Wow Cards, here is another one of her BIG accomplishments, and her newest favorite gymnastics skill:

And here she had just learned to do a “Squat on”!

Her most recent accomplishment is being able to do 10 “Up and Overs” in a row, which means that she does a pull-up on a bar, and pulls her legs up and over the bar, drops down without touching the ground, and repeats. Ten times. WOW. I am seriously impressed!!

We have no idea if she will love gymnastics for five more minutes or twenty-five more years, but either way, she’s having a blast with it right now!