By Susanne, In Family, Friends, Party Time, Selah With 3 comments

Well, we tried to keep it simple this year and therefore brought two ponies to our house for Selah’s 4th birthday! #palmtoforehead #itried #ilovecelebrating!!!!!

Sometime you’ll have to ask me how the story unraveled, but I’ll just say somewhere in the middle of the story Selah became unwavering in her conviction about wanting an animal birthday party. When I asked her what was most important to her about an animal birthday she replied, “Well, I’d like to do a giraffe craft…and another giraffe craft…and I want a giraffe to come to my birthday.”

So…after a lot of thinking and chatting, we settled on ponies. MUCH simpler than giraffes, right?!! Right.

The clincher was (as I talked through the party options) Brian saying, “Ponies!!?? It’s every little girl’s dream to have a pony birthday party!!!” Done. 🙂

The night before her actual birthday, we celebrated Brian’s and her birthday together at Red Robin. On the way home, her balloon popped which (obviously) caused major birthday drama. Thankfully, Grandpa came to the rescue…he mended her broken balloon into a teeny tiny new balloon :). 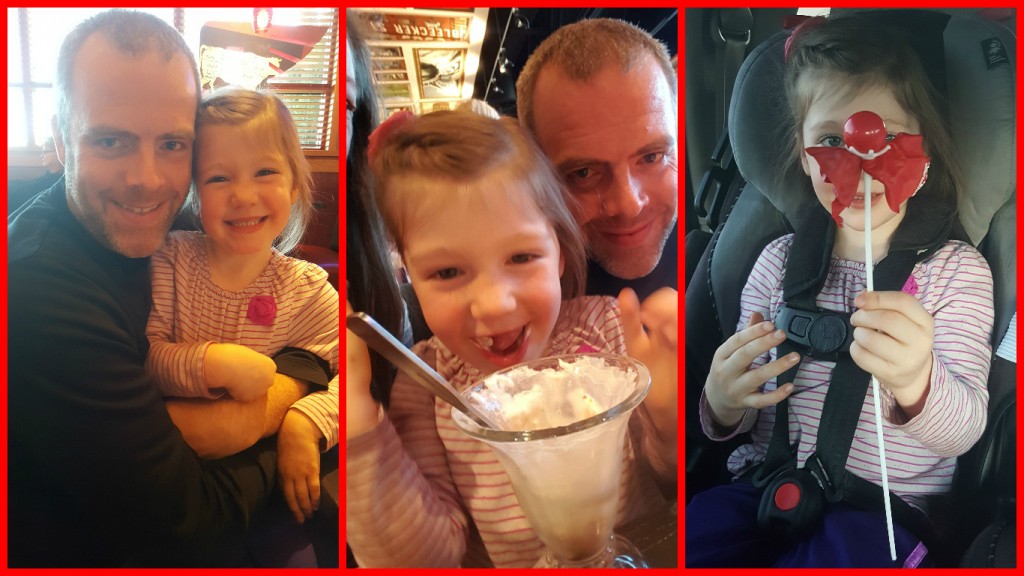 On her actual birthday, she opened up some presents and then Brian and I took her out to breakfast at her breakfast place of choice, which also happens to be MY favorite breakfast place :). Our pager number was #4!! She was very bold about telling everyone it was her birthday, and when the manager sat us she asked, “Are you going to put candles in my pancakes?” The manager was very sweet and said, “Hmmm…well let me see what I can do!” And Selah said, “FOUR candles. Pink and purple.” I elbowed her urgently with each request whispering, “PLEASE!! Say PLEASE!!” She was a girl on a mission alright! Then when the waitress came by to take the order she said, “Can you make my pancake into a dog?” And she said she could try to do Mickey Mouse. The manager, the waitress and two other women brought her plate out with four pink and purple candles sticking out of a Mickey Mouse shaped chocolate-chip pancake, singing Happy Birthday so sweetly. I held back tears as Selah did what she always does when put on the spot: buries her face into me. Sweet girl. She was so blessed!! 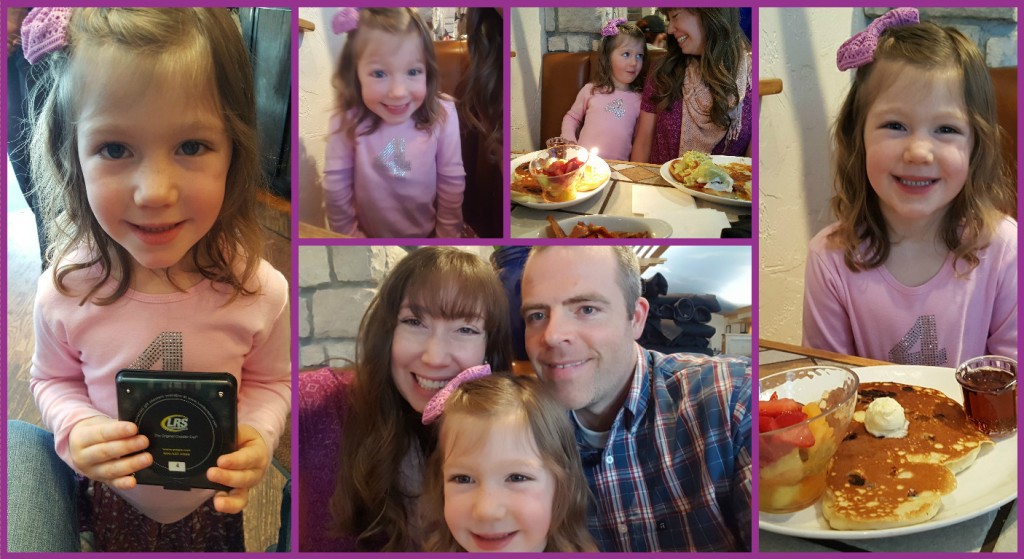 That night, my family had the monthly/quarterly birthday celebration so she had a little party that night with Nonna and Grandpa and her cousins. She got a CAMERA from Grandpa and Nonna and I’ll just say…she hasn’t put it down since!! When I found her that night all ready for bed, in her bed, taking pictures (of her ceiling?) I texted my mom the picture on the right and said, “She hasn’t put the camera since she opened it!” And my mom responded, “Like mother, like daughter!” Haha, she is totally right!!! I hadn’t even seen it ;).

Her actual birthday party was the following weekend. Some of her favorite friends arrived for a morning filled with everything ponies!

“Trot this way to Selah’s birthday!”

Here’s a little funny for you: we decided to hold the party entirely in our back yard and I was praying for WEEKS that the weather would be nice and that it wouldn’t be too windy as the party was mid-October. WELL, not only was the weather NICE, but it was SO HOT that we ended up needing to move the party inside!! HA! So our son, whose birthday is in the SPRING, had to last minute reschedule his party because there was a blizzard on the original party day, while our daughter, whose birthday is in the FALL had to move her party inside due to extreme heat. Oh my. I love Colorado :). 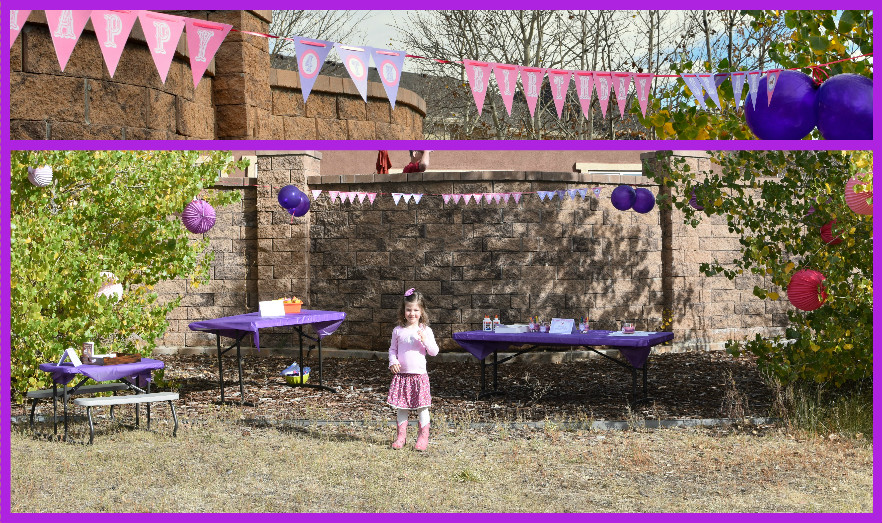 We had all sorts of crafts and activities set up in the backyard for the kids: 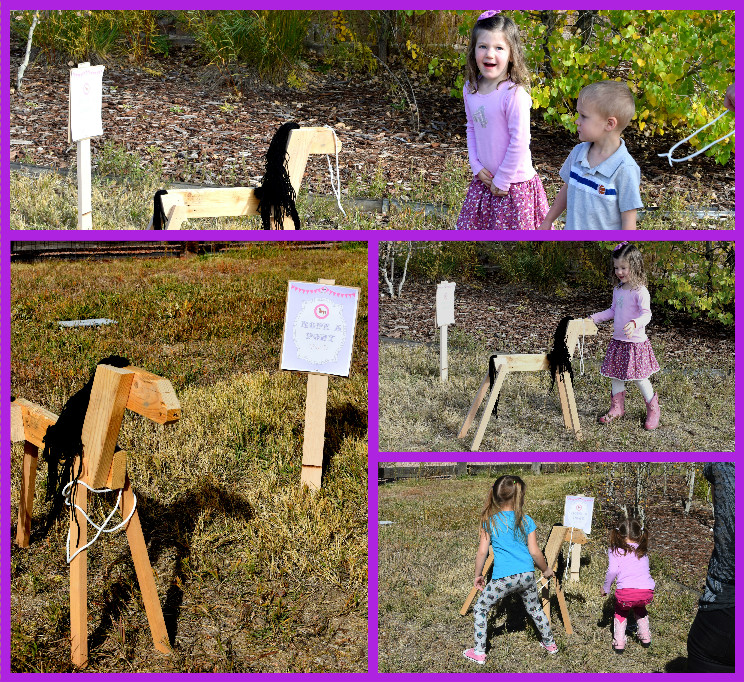 “Rope a Pony” (Pony built in about 5 and a half minutes by Selah’s awesome daddy!) 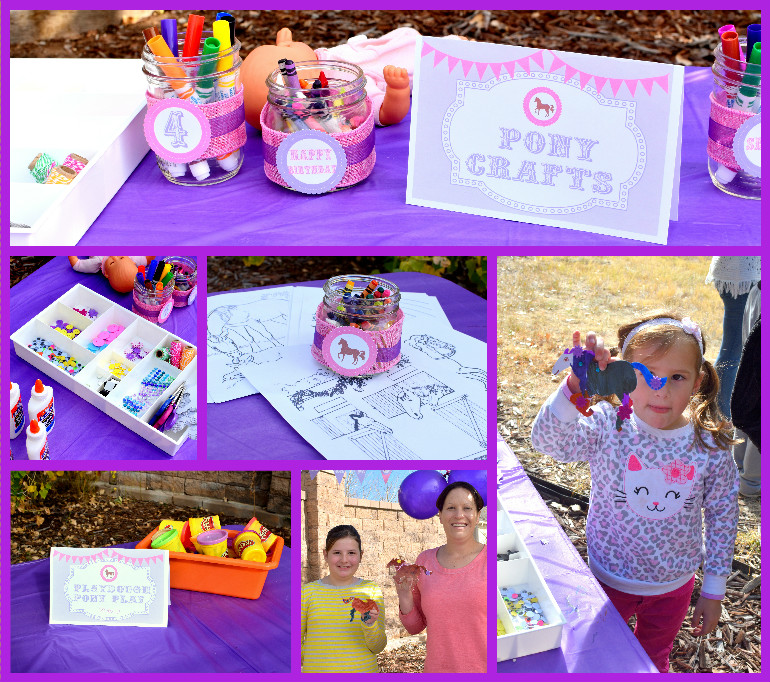 Pony crafts! Everyone got to decorate paper horses and stick a magnet on the back for their fridges. There were also lots of pony coloring pages that kept kids busy along with a Playdough Pony Play station! 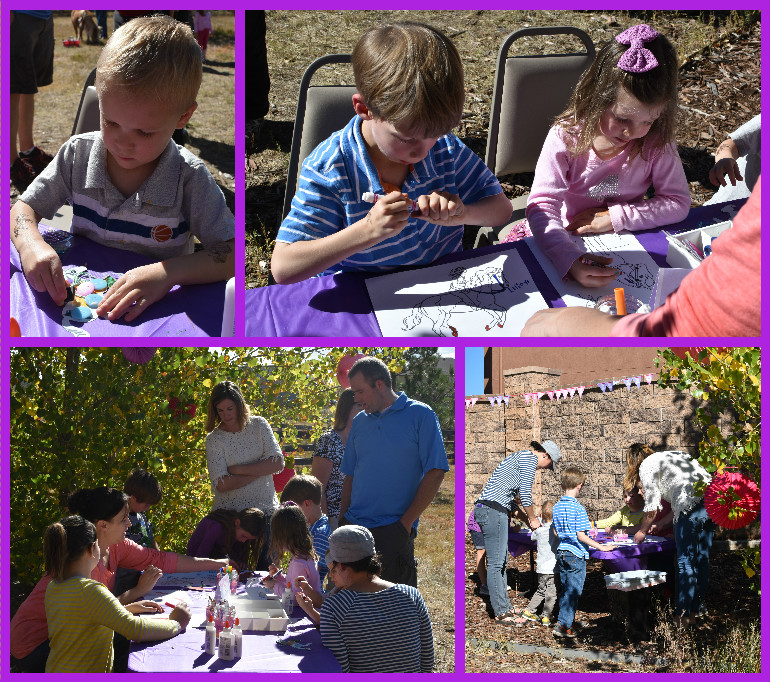 Those of you who have been around our kids know one thing: they are both  “slightly timid” around animals. Yet both of them requested an animal birthday when they turned four. So we honestly had no idea how she was going to do around the ponies, as even hearing the word “dog” can send her into a tailspin. But here is her very first time climbing up onto her birthday pony…and as you can see, she looks like a natural :).

The little farm that brought the ponies also brought another one to “groom”. The kids could brush her and braid her mane and put bows in it. They had a blast!

The “lead” cowboy who brought the ponies was just awesome and really got into the party. At one point he said, “Do you girls want to paint the pony’s nails??” I looked at him with big eyes, but he insisted…”Come on over! Let’s paint her hoof!” You saw it here first, folks: 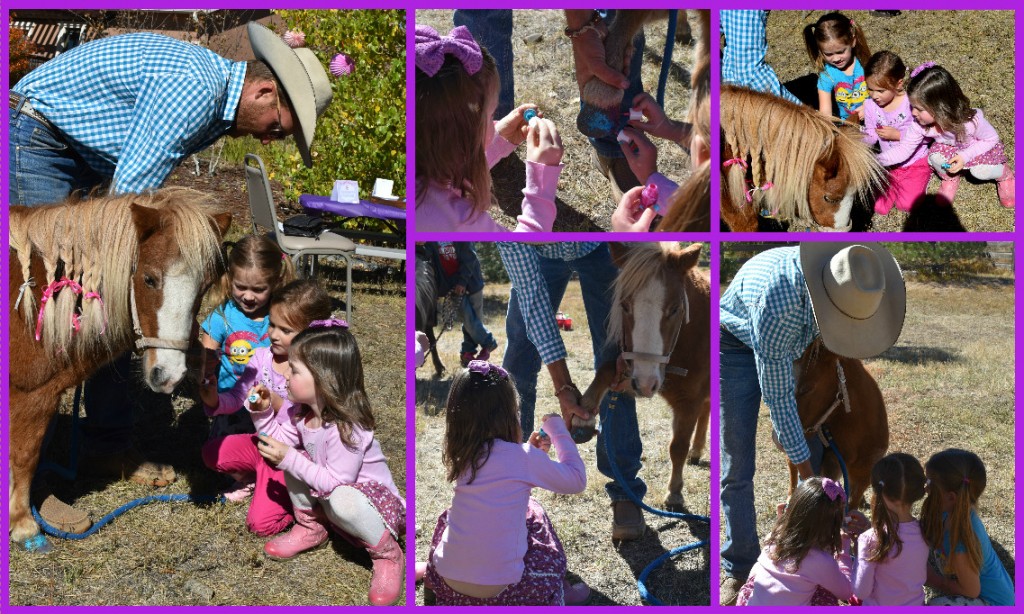 The next time you see a pony walking around with pink, purple and blue nail polish on his front hooves…you’ll know he was the pony at Selah’s party!

Do you see the braids and the ribbons in the pony’s hair??? I love it. 🙂

Every kid had tons of time to ride the one pony and to groom the other. Selah was the most excited to ride the pony over and over and at one point she insisted on mounting him all on her own. On the left, she’s telling Brian to let go of her…and then she got up all on her own! Look how proud she is :). 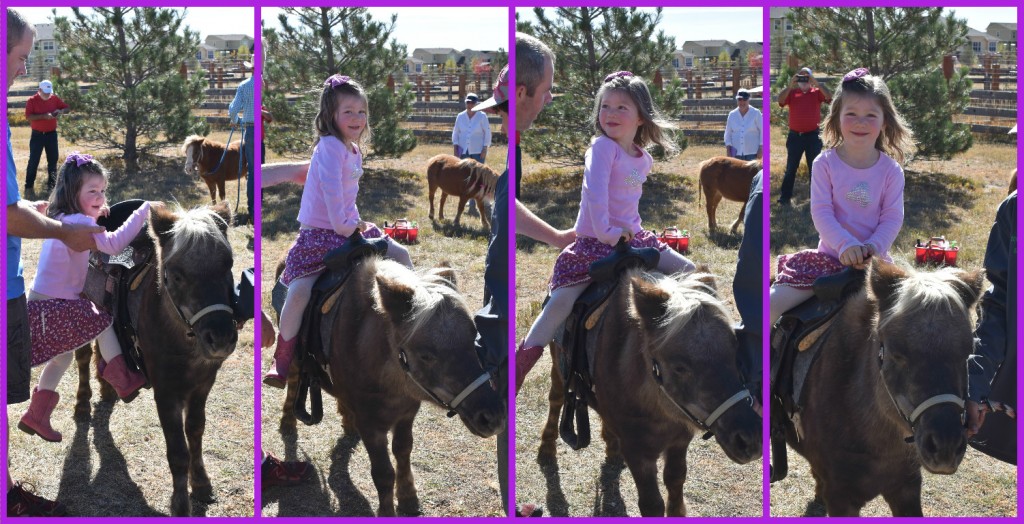 We are so blessed to be the parents of this beautiful, horse-riding 4 year old little girl!!

Look at this sweet group of friends :).

Once the ponies left, we played “Pin-the-tail-on-the-pony” (obviously). 🙂 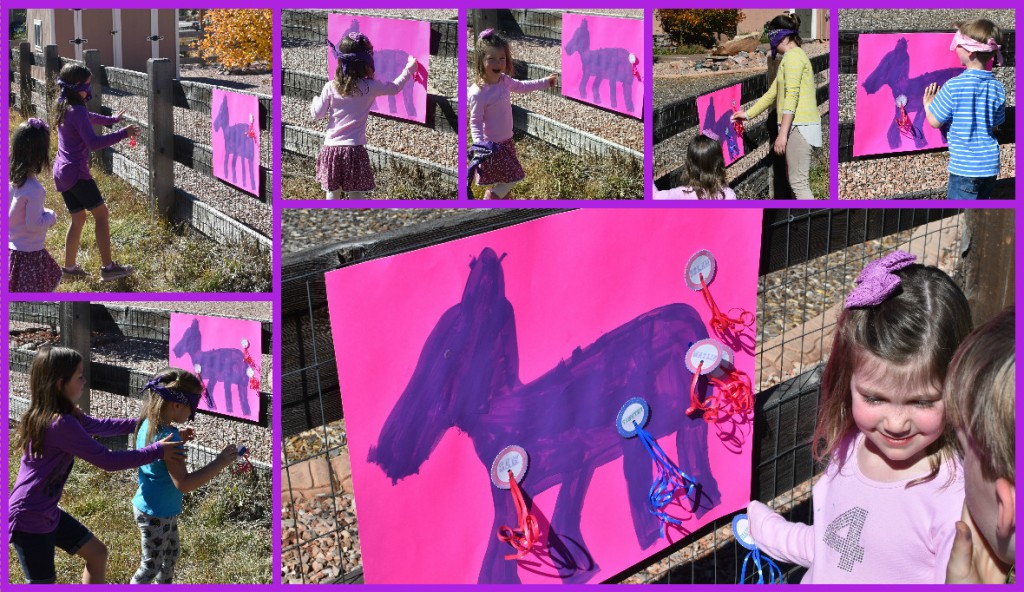 And by then everyone was so hot and sunburned that we opted to move the rest of the party inside! 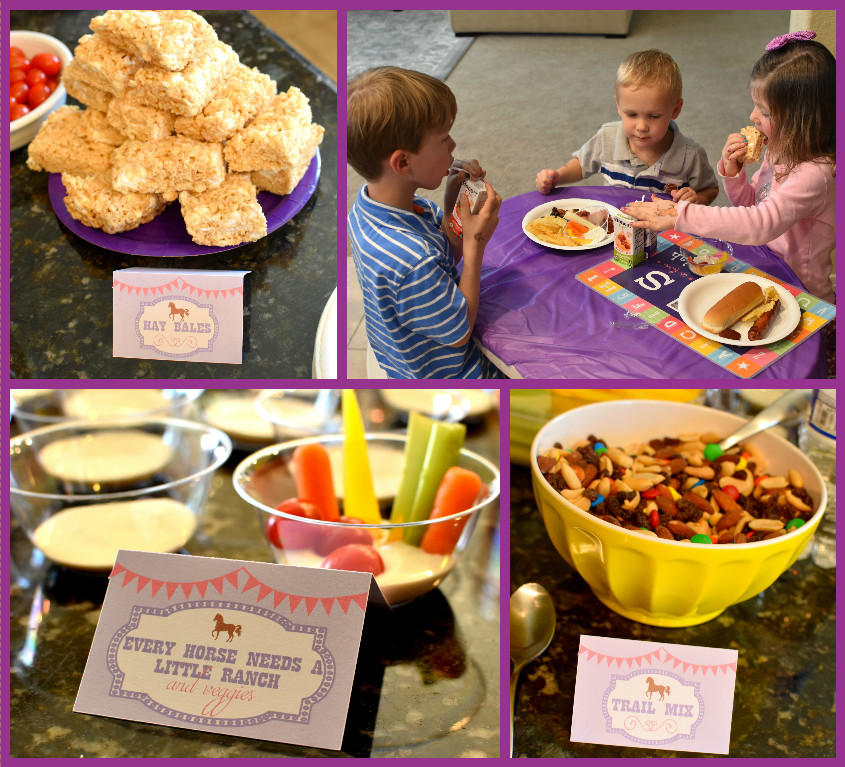 Hot dogs for the main course and Hay Bales, Trail Mix, and Ranch on the sides…

And then, of course, the CAKE. Selah really wanted cupcakes which I was super thankful for…I am terrible at making cakes, but I can turn cupcakes into just about anything!!!

Since I was taking pictures she had to hide behind Brian while everyone sang “Happy Birthday” to her. But she warmed up when it was time to blow those candles out! 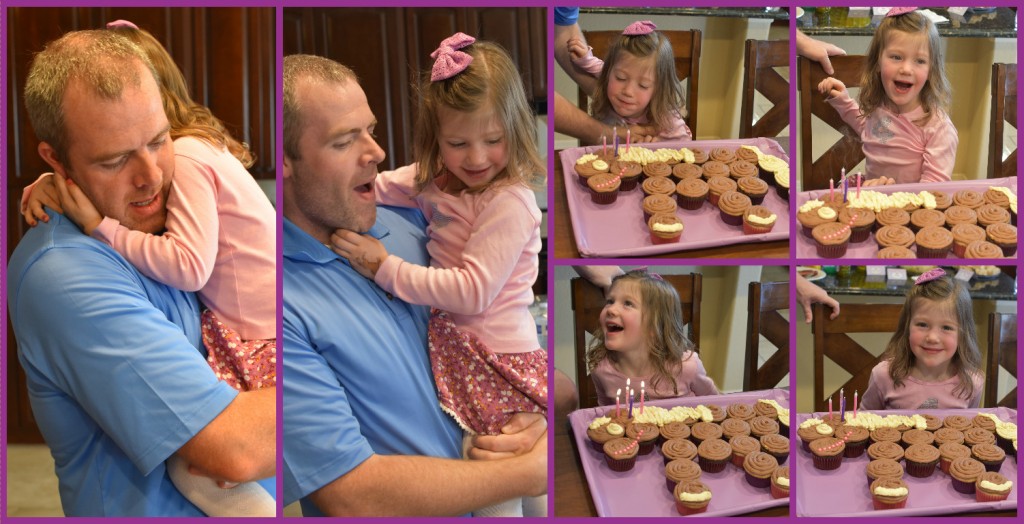 The favors consisted of a little pony, a horse tattoo, horse stickers, rainbow stickers (because “rainbow” is Selah’s fifth favorite color, after purple, pink, blue and green). The girls also got some ponytail holders for “their” ponies…

It was a wonderful day celebrating our sweet 4 year old!! Thank you, Lord, for this precious gift of a daughter!!! 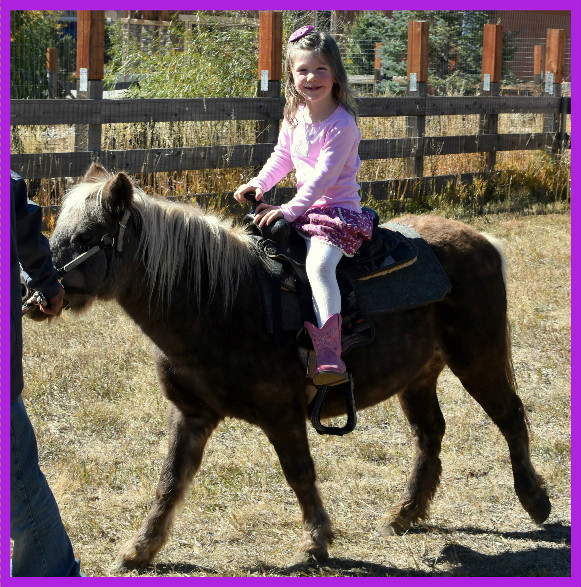 < Our little gymnast
Christmas in November >