By Susanne, In Faith, God, Motherhood, Train Up Your Child, Victorious Parenting With 3 comments

We had probably seen “Pets Rule!,” a captivating, delightful, and highly-entertaining show at SeaWorld at least a dozen times. Elliott has always been quite taken by dogs and animals of all sorts, and this show was FULL of them—dogs, cats, pigs, ducks, you-name-its–all moving to the beat of the music while performing incredible stunts. Perfectly trained animals, clearing having the time of their lives as they showed off their mad skills while the audience cheered loudly with admiration, awe, and excitement. 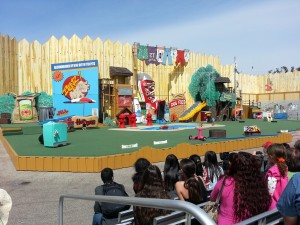 So there we were, probably the thirteenth time in, and we got to THEE PART. You know, thee part…? Where they cue the touching music and make their speech at the end? Well, the woman had barely spoken the first three words of her monologue before the tears began to ROLL out of my eyes.

“…But you know, not all the animals you see here today were always so happy and healthy. As a matter of fact, some of the pets you have just seen perform, like Fresco or Casey, were either surrendered by their owners or picked up off the streets and taken to shelters and had no one to care for them. Take Chad. His owners gave up on him. They said, ‘He had too much energy and couldn’t be trained.’ Well, as you can see, Chad is very well behaved. Chad responded to every instruction he was given, jumped through hoola hoops and over obstacles and threw balls into hoops…”

Chad was not just “trainable.” Chad had been trained to be an extraordinary dog. A dog who performed amazing feats and tricks that most dogs will never do in their lives. His teachability and talent were clearly qualities that had been inside of him all long…it’s just that he had been given up on.

My lip quivered like a small child and I finally stopped trying to hold it in. Brian looked at me, incredulous. “Are you…crying??” he whispered in total awe. “What is wrong??”

“It’s just…it’s just…” I blubbered. “It’s just that this speech gets me every time!!”

The speech…the speech about Chad and the other abandoned animals…It’s such a reflection of how our world views kids these days…how parents, teachers, society view our children. Unruly children, exasperated parents. You see it everywhere. Children in the grocery stores, throwing fits and screaming at their parents; parents throwing fits and screaming right back at their children. Children abandoned…everywhere. Physically, emotionally, spiritually…abandoned. They have not been trained. Where are the parents?? Where are the fathers?? Where are the mothers?? Where are the ones who will, instead of giving up on “unruly, impossible, nothing-can-be-done” children, go to their knees and ask God for His grace to understand the Word—where every piece of wisdom needed to parent in righteousness can be found? What I have heard over and over from parents is, “He is too out of control. There’s nothing to be done.” Why is it that the moment someone hears I have a 2-year-old, their expectation is never that he would be the delight that he is, but instead that he would fall right into the “the norm,” which is, “naturally,” that he would be a “terrible two-er”? Why are the “terrible twos” considered a “normal,” “expected” part of aging? I have a hard time believing that Jesus would have walked by a “terrible two-er” and said, “Oh, yeah…just get used to it. There’s nothing to be done…just carry on, and hope that age 3 comes quickly.” Yet this is what we seem to believe as a society.

I encountered it in teaching every day. A father who would roll his eyes while talking about his daughter (in front of her) and telling me how impossible her attitude was to deal with. A mother who labeled her son “devil child,” and then was filled with rage when he lived up to her expectation.

Unfortunately, a teacher can most often only go a “long” way…it is very difficult to go the entire way. That’s the parents’ jobs. To love and train their children relentlessly and diligently their entire lives.

But I see it in homes, too. Homes where the parents deeply love their children and love the Lord, yet have resigned to certain aspects of exasperation because “aren’t kids just exasperating?” It’s what we’ve been taught. Parenting is already the most difficult job that there is, and I want to breathe HOPE into you that it’s NOT your lot to live with exasperating behavior, rebellion and disrespect!! It’s not good for you OR your child! God promises us more!! I have observed this resignation in many, many families where the parents (excellent, excellent parents) just didn’t have vision for this “more.” This is what grieves my heart—like the owners who gave up on Chad because he was “untrainable,” I see parents, my friends, who are at the end of their ropes, exasperated and fed up. Unlike Chad’s parents, at least they don’t send their toddlers to the streets (haha), but they do not search out for more in their homes because of this stereotype that babies/toddlers/kids can’t be trained and are just meant to be frustrating their first few years of life. It grieves my heart because I know that’s not their heart for their kids and I know they are not living in the fullness with real vision. Vision that there truly could be peace. That the fruits of the Spirit could, indeed, be alive and active in their homes…even—even—in a home filled with babies and toddlers (and more).

I don’t condemn Chad’s previous owners—that’s not the point. But there’s this piece of my heart that wonders what could have been for them, had they had vision to really train him. I imagine he would have brought an enormous amount of joy into their home. 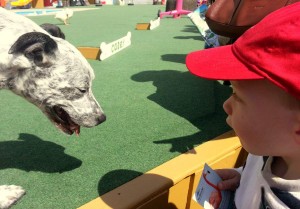 So to say that I am passionate about the training of children unto righteousness, godliness, holiness and practically, unto respect, self-control, and love probably doesn’t do my passion justice. But if you have spent even five minutes around me, with my kids or any others, my passion will probably be quite obvious. I am inserting a mini series of “Training” posts within my “Victorious Parenting” series because, I believe, training is fundamental to being a victorious parent.

I know this because I know this is God’s heart for us as his children and also for us as parents. Not only does he say, “Train up a child in the way he should go, and when he is old he will not depart from it” (Proverbs 22:6), but THE ENTIRE BIBLE is filled with training. Instruction. Teaching. If we neglect to train our children, we neglect to understand God’s heart in many areas of our own lives and the lives of our family. And that, my friends, is a big deal.

So, I will leave you with this: Proverbs 29:17 (in several different versions) to breathe some hope.

Discipline your children, and they will give you peace; they will bring you the delights you desire. (NIV)

Discipline your children, and they will give you peace of mind and will make your heart glad. (NLT)

Correct your son, and he will give you comfort; He will also delight your soul. (NASB)

The following is from a commentary I read on this verse: “Correct thy son, and he shall give thee rest,… Ease of mind, satisfaction and contentment, freedom from all anxious thoughts and cares; the correction being taken in good part, and succeeding according to wish and design; yea, he shall give delight unto thy soul; by his tenderness to his parents, obedience to them, and respect for them; by his prudent behaviour among men; by his sobriety, diligence, and industry in his calling; by his fear of God, and walking in his ways; than which nothing can give a greater delight and pleasure to religious parents.”

This Scripture speaks to a picture of a child who is disciplined, trained…a child who brings peace rather than chaos. My children are far from perfect. (Perfect will never be my goal.) But I will tell you with confidence—they are trained (and, obviously, will need to continue to be trained every day for the rest of their lives). This Scripture could not ring more true in our home, as Brian and I say to each other constantly, “Our children are so delightful!!” Not because they act perfectly all the time (again, not the goal), but because so much of the time, our children are, indeed, tender to us, obedient to us, have respect for us…Selah, even at 16 months old exhibits all of these behaviors on a regular basis. By the grace of God, in these early years where selfishness and tantrums are very real battles, our kids are already delights to our souls. And they did not just COME like that, like some people assume :). It has taken a LOT of training…but wow, have we seen fruit from that training!! Every day I am grateful for what we have invested in their early months and years, because it surely brings delight to our souls every single day. My heart is not to boast in anything I have done (because it was only through utter weakness and hours of prayer on my knees that I came to understand many of these truths), but only to boast in the truth of the Scriptures that promise us that when we train up our children according to the Word, there will be good fruit.