By Susanne, In Elliott With no comments yet

It’s funny…you wait for this day all year…it’s such a milestone…and I was convinced that balloons and streamers were going to be set off in the air all day long and that there would be dancing and singing in the streets from dawn until dusk, which is when the fireworks would take over and the celebrations would go long into the night… Elliott Brian Moberg is ONE!!!

But, surprisingly, the world did not celebrate his birthday quite like that. It was much more ordinary. But we did what we could to make the day as special as possible for our sweet little love, who has brought unspeakable joy and laughter to our lives in the last twelve months.

So, the day before our sweet baby boy turned one, he woke up with this awful, awful sickness. The world “cold” just doesn’t seem strong enough for what he’s been fighting the last 4 weeks. He gave “it” to both of us, and hence, the delay in this blog post–we have all been S-I-C-K in this household. 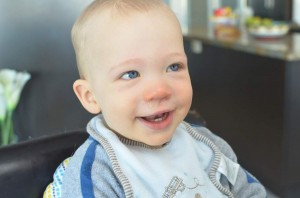 This is how Elliott woke up on March 20. Snotty, but at least he's smiling still at this point in the day!

But that isn’t going to stop me from devoting a post entirely to his actual birthDAY, and hopefully soon I can put together a quick post about the little birthday party we held for him after the House Build.

His birthday was on a Tuesday, so we had class. I stayed home with the birthday boy who was in no shape to go out that day while Brian went to class. I knew Elliott needed to rest, but how do you force a super active 1 year old to rest?? I even tried to put on a movie (his very first one!) and cuddle with him, but he would have nothing to do with sitting still. So we “calmly” played in his play room together while “The Lion King” kept us company in the background.

As you know, we devoted the majority of our finances and time towards the House Build for Elliott’s birthday. But we wanted to get him a few small gifts to remind him of the special day where we (along with our friends and family) gifted a family with a home in honor of his 1st birthday. So when Brian got home after lunch, we decided it was a good window for him to open his gifts.

(A little disclaimer: not only was Elliott super sick, but it was SUPER cold in our house that day. So we have him very tastefully bundled up in a onesie, socks, fleece footed moose jammies with this fleece Christmas jammy thing on top. What can I say? They were hand-me-downs and they came in VERY HANDY right about then!!)

First, he got to open a present from each set of his grandparents, which was very special. Then he found the gifts we had “hidden” on his play room shelves. 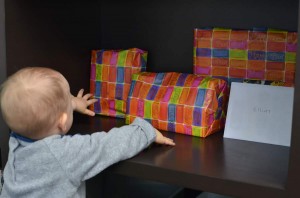 He found his presents all on his own! 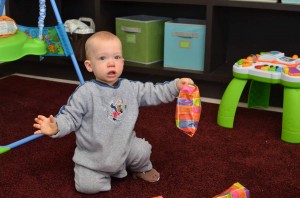 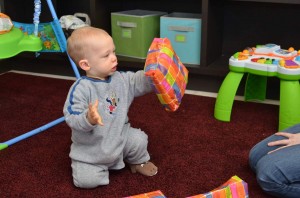 "I wonder what I should do with it?" 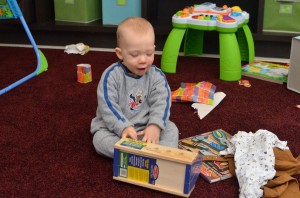 Oohing and ahhing at his three presents from us: A set of Carhart overalls to wear for the house build, a tool puzzle to learn the names of all the different tools he'll need to build and, of course, a tool set so he can practice building! 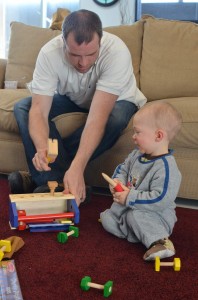 Learning how to hammer from the coolest builder Daddy on the planet. 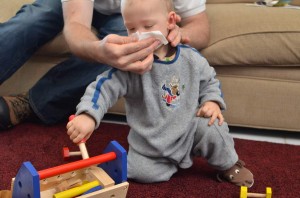 But honestly, this is what we spent most of his birthday doing. 🙁 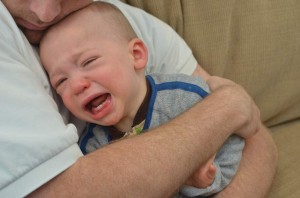 ...which always led to this. Poor birthday buddy :(. 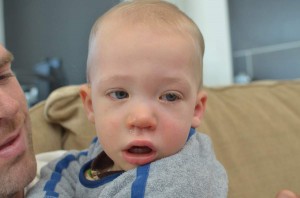 Yep...time for a birthday nap!!

Happy birthday, baby boy! Here’s to hoping that next year you will not be sick on your birthday :).