By Susanne, In Elliott With no comments yet

Well, seeing as this post is almost a month late, Elliott’s “official” 12 month post will be short and sweet. SO much has changed from months 11-12 until now, when he’s almost 13 months!!! But here are a few highlights from before he turned 1.

Elliott babbles on and on every day. He says “dis” and “dat” and babbles “mama” and “dada” all the time. However, I wouldn’t say any of them are QUITE consistent enough to say he’s really using them as words…he kind of uses them all interchangeably :). A couple weeks ago he started saying what I think we will count as his “official” first word, which is “more.” Which comes out like, “Mo’! Mo’! Mo’!” It’s awfully cute :). By far, the one thing that has become very apparent in the last couple of months is that Elliott LOVES BALLS. I mean, LOVES THEM. More on that in another post…

He loves talking on the phone! 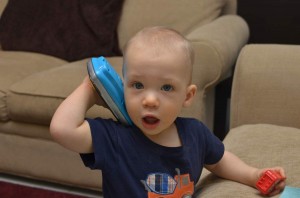 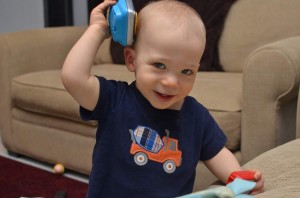 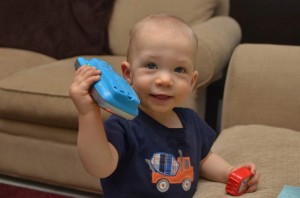 Elliott took his first steps! It’s funny to look back and watch this video because he’s so much more sturdy on his feet now. But here were his very first few steps!!

Elliott learned how to eat with a spoon:

Well, this is officially Elliott’s very last “monthly blog post update.” But don’t you worry, he’ll still be featured from time-to-time because he is, after all, the star of this Moberg show! 🙂