The Greatest, The One

By Susanne, In Faith, God, YWAM With 4 comments

At that time the disciples came to Jesus and asked, “Who is the greatest in the kingdom of heaven?” He called a little child and had him stand among them. And he said: “I tell you the truth, unless you change and become like little children, you will never enter the kingdom of heaven. Therefore, whoever humbles himself like this child is the greatest in the kingdom of heaven. And whoever welcomes a little child like this in my name welcomes me…. See that you do not look down on one of these little ones. For I tell you that their angels in heaven always see the face of my Father in heaven. What do you think? If a man owns a hundred sheep, and one of them wanders away, will he not leave the ninety-nine on the hills and go to look for the one that wandered off? And if he finds it, I tell you the truth, he is happier about that one sheep than about the ninety-nine that did not wander off. In the same way your Father in heaven is not willing that any of these little ones should be lost.“

The first time I walked to the Haitian Refugee camp, it was the smell that hit me first. 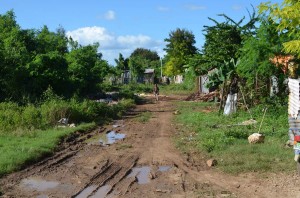 I would recognize the smell anywhere. The smell of “house” after “house” crammed into tight spaces, adjacent to a garbage dump…the smell of mismatched cardboard or slabs of tin that form the walls and the roof of each said “house,” each piece carefully overlapping the one next to keep the rain, wind, and sun out as best as possible. The smell of hungry children and runny noses and congested lungs… The smell of eyes longing for love, arms longing for an embrace, hands longing to be held. It’s the smell of poverty. Poverty of environment and poverty of spirit. 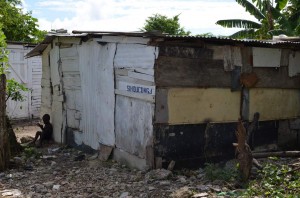 This is one of the nicer houses

The first week I was there we painted the girls’ fingernails and played jump rope with them. 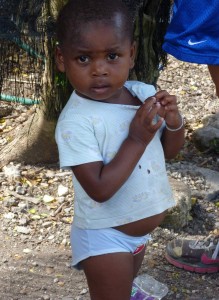 It’s difficult enough for me to dig up the language in my brain that has been dormant way too long, let alone understand these sweet children’s Spanish, which is not only their second language but also “Dominican” Spanish–which is quite different than Spain and Mexican Spanish. I can’t give them anything… I can barely communicate with them, and their needs are far too great.

So we sat there on the ground and painted these little girls’ toes and fingers…one by one, they chose a color and held out their hands. Is this enough? I don’t want to paint their nails–I want to buy them new clothes and give them healthy food and build them a home with electricity and running water…I want to give them an education and disciple them in the ways of the Lord…I want them to know they are loved, I mean really, really loved–by God. And I want them to really be loved by their friends and family. But all I held in my hand was a cheap bottle of nail polish. And my heart cried.

I am not enough.

And He whispered to me, “But you hold the keys to the Kingdom of Heaven.”

And so I prayed. I prayed with every stroke of the mini brush. I prayed with the faith that every prayer I prayed would not only be answered, but answered quickly. I had no choice but to pray that way–I had nothing else to offer.

One little girl was dubbed “the mean girl.”

She would provoke all the others by hitting them, messing up their freshly painted nails, stealing the nail polish, spilling it every where. And then she would cry…and cry and cry…when someone hit her back or she didn’t get what she wanted. I was told she’s always like this. She was out of control.

I didn’t have anything to offer her. My attempts to love her were rashly pushed away with cries and swats. She was difficult to communicate with and she had no intention of communicating with anyone anyway. I didn’t have weeks of relationship built up with her so she could trust me. I didn’t have a corner to put her in for a time out. I didn’t know if that would be the last time I ever saw her. And my heart flooded with tears.

I am simply not enough.

And so I prayed. I prayed as if this was the only time she would ever be prayed for–I prayed for her past to be healed, for her present to be rich, for her future to be set upon the straight and narrow. I prayed with deep unction and conviction. I prayed, believing every word uttered under my breath was answered the moment it hit the air. I didn’t have the option to pray any other way.

Then there was Jonathan. 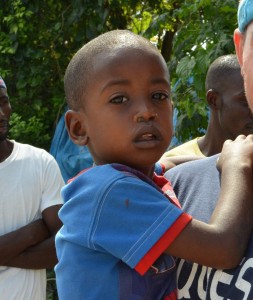 His nickname is "Chiquito"

He was constantly held the whole time he was with us and never uttered a word. We had to take him home after the program, and I got to hold him on my lap. Adrienne told me his story as she drove and as I listened to his congested breaths slowly go in and out…in and out…He was so thin, and so sick. She said that his mom abandoned his family when he was a toddler and so his father is his only caretaker. Yet he doesn’t actually take care of him…because he works every day. The neighbor woman told Adrienne to watch him carefully–since no one watches over him, the other kids rough him up whenever they can. He is so hungry. He is not well. He doesn’t waste his energy on speaking or running or playing–no, he uses the small amount of strength he has to lift his arms up towards anyone who will notice him, asking to be held. His eyes, his heart…long to be embraced. And there, in that moment, I had a 5 minute car ride with Jonathan. I knew it was my only window. And my heart sobbed.

I am not even nearly enough.

And so I prayed as my heart cried. It’s impossible to describe the agony of the ache in my heart for this precious child. How can he have a chance in this world? You know he wasn’t rocked when he cried. You know he didn’t nap and sleep well as a baby. You know no one was there to greet him with the biggest smile and warmest embrace every time he woke up. You know no one reads him books every night. You know no one sings to him. You know no one has taught him how to count. You know no one (on earth) has been speaking truth over him ever since the day he was born. I held the tears back as I asked God for big things for His son. I prayed for healing to consume his physical body and his emotional mind and his sensitive heart. I prayed for his salvation. I prayed for provision of every type. I prayed for love to surround him. I prayed every short minute that I had with Jonathan…because I knew that was the best thing I could do for him…

It is times like these that I wonder if it would just be easier to look away; to not acknowledge and turn my face towards the massive suffering and injustice in this world. Because it is all-consuming and overwhelming to choose to invest my heart in the lives of those who suffer and have need.

That is, until I can fixate my mind on the Truth of the cross, and the truth of our Savior who goes out of His way to love the one. And that’s all. Why do I underestimate that I am one, loving one? Over and over my God speaks to the importance and impact of just one. Especially one of the little ones. He calls children “the greatest”… God thinks Jonathan, this one, is the greatest. And so when I remember his eyes, I must not just remember the loneliness, the abandonment, the sorrow, and the pain…no, I must remember that his angel sees the face of our Father in Heaven. He is not forgotten.

Because my God is enough…yes, HE is enough…He is enough for these children. There is too much need for my two hands. But He…yes–HE–is enough. He is always enough. And, just like the bible lesson I preached to those kids that day–HE in ME is greater than THE ONE in the world…HE in ME is enough.

I, with the power of Christ living in me, am enough...

…Because the one is enough. The one is the greatest.

He is one God, who sent one Son, who left with us one Spirit.

For one lost sheep.

For one sandwich for the woman who hasn’t eaten.

For one home built for the family who didn’t have one.

For one toy for the child who has nothing.

For one bible lesson for the girl who had never heard the Truth.

For one gospel presentation for the boy who didn’t know Jesus.

For one prayer lifted up in faith.

For one person choosing not to avert her eyes when she sees the brokenness.

For one believer who says, “Yes” to the call of God.

For one…for the one who goes.