Our sweet little girl turned 8 on the 8th…her golden birthday!! I’m so thankful that we could slow down and take the time to celebrate our girl. She is a constant source of laughter and joy in our home and I am so thankful for her!! She is still the little girl who doesn’t need another person to hold a conversation (she is perfectly content talking to herself), interrupts herself while she’s talking almost EVERY.SINGLE.TIME and cracks herself up more than anyone I know. The other day I asked her a simple question about what she and the other girls did at school and after 15 minutes of trying to answer this simple question but interrupting herself with rabbit trails and other stories I finally burst out with laughter, “Selah! Just finish your sentence!!” She paused and said, “Well it’s more like a paragraph than a sentence.” Oh my word…yes, yes, it is. More like a novel, really.

She requested just having one friend come over for her birthday, her dear friend Aspen. And it’s a good thing that’s what she wanted because…Covid. She sees Aspen 3 times a week but it is never enough for these two girls. They are CONSTANTLY asking for sleepovers and extra play time. What a perfect day to make that happen!

So when I asked Selah what she would like to DO for her birthday, the ideas ranged from ice skating, to “I want it to snow and build a snow fort and have a snow ball fight,” to make and shoot bow and arrows, to whittling wood. But the two things that she kept coming back to were a wood whittling party and a bow and arrow party. Because, Selah. That’s my dear, special girl!!

She and Aspen have been making their own bow and arrows for weeks and it’s been really fun to watch their creativity and skill. So why not have an archery contest?! But then, of course, I started thinking about her golden birthday and how to incorporate that and it came to me: Selah’s Golden Olympic Birthday Games: Go for the gold! How fun, right?! I also just couldn’t resist doing something extra special for her golden birthday, so this year she woke up to a surprise on October 1st with a note explaining that she would have a surprise every day for the 8 days leading up to her birthday. That was fun :).

Day 1: She woke up to new bedding on her bottom bunk! (The kids had shared a room and the bunk beds up until last Spring. But ever since Elliott moved out the extra bunk has just remained empty.)

Day 2: Her cousin Taylor! She knew her grandparents were arriving on the 2nd, but she DIDN’T know that they were bringing Taylor! I told her she would find her surprise in the back seat of their car…as she opened the back door and began searching, Taylor popped out of hiding from beneath a pile of coats! It was awesome.

Day 3: Brown paint! Selah and I finally got around to painting her room a few weeks ago and as we talked about what she wanted on her walls, she said she really wanted a family tree painted on her wall, with photos of her family (and friends) on each of the branches like leaves. Well, okay then! It was super special for her to have Taylor here to help draw and paint the tree (which we barely got finished before Taylor had to leave)!

Day 4: A rug for her room! Many weeks ago she mentioned casually, “I would love to have a round, teal rug for my room.” Amazon made it happen :). That day, I told her she’d have to find her surprise and her reaction when she found it was priceless! She carried the rug around with her everywhere she went for the next several days, haha. She wrapped herself up in it like a blanket and dragged it through the house and slept underneath it. I think she likes it :). 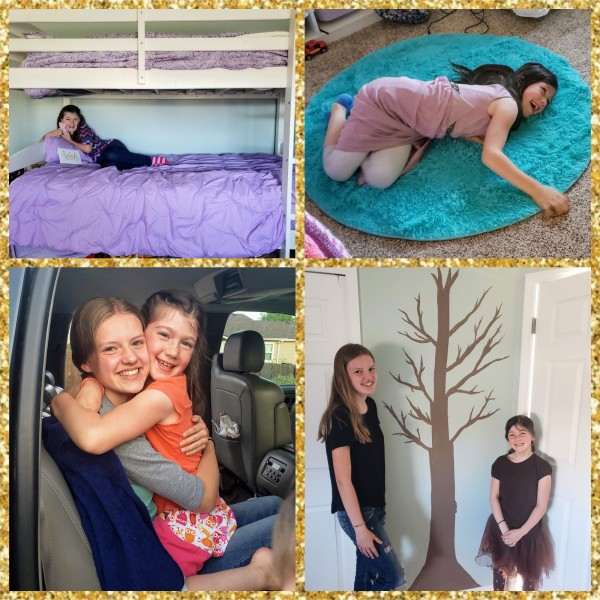 Day 6: I had asked her several weeks ago if she’d like an “8” shirt sort of like the “7” shirt we got her last year. After looking through several puppy shirts (still in love with puppies) she came across this brown tulle skirt with puppy ears and a tail. And she was IN LOVE. She wanted a plain brown shirt to go with the skirt. Alrighty then, Selah B!!! So her favorite stuffed teddy bear was missing this particular morning but Selah found a note from her, explaining that she was playing hide and seek (which happens to be Selah’s favorite game). When Selah found Beary, she was dressed in Selah’s new puppy outfit. 😉

Day 7: We decided to get her a “real” bow and arrow. We knew she would love it but we also figured it might be good to have a real one for the kids to use for the archery contest. See anything interesting about this picture below??? 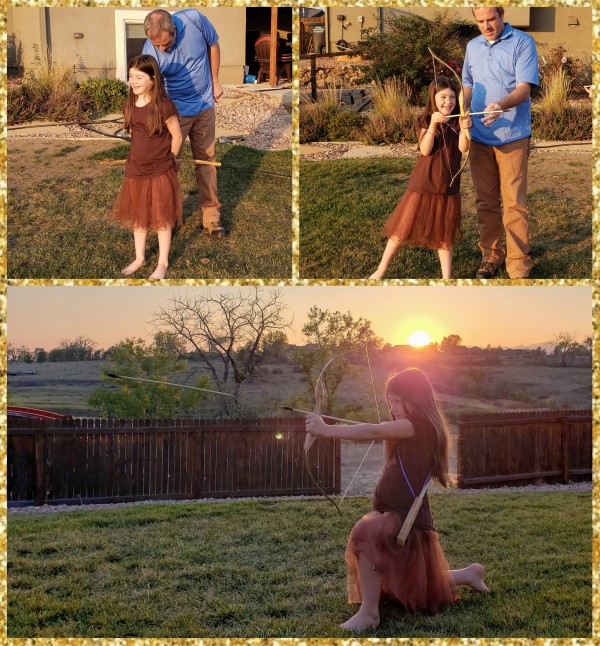 Also, what should I do with this picture? Blow it up and frame it? I can’t get enough of it. I have entitled it, “Target Practice.” 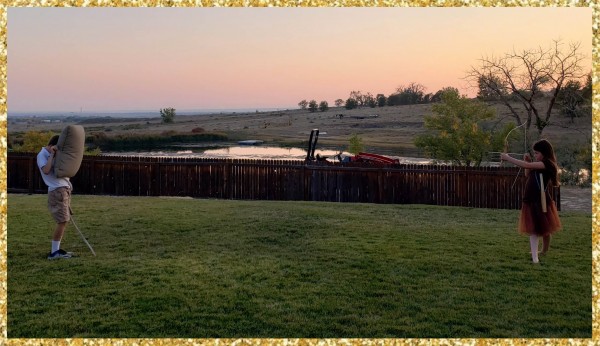 Day 8: For her golden 8th birthday, her final present from us was a (rose) golden locket with a picture of the three of us in it. 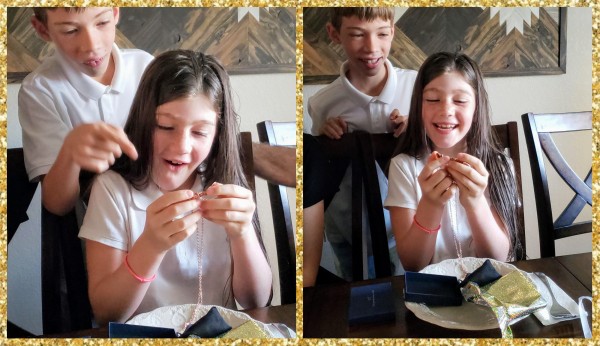 Her actual birthday was a co-op day so we had a semi-special but quick breakfast, she opened her locket and then she was off to school. I sent her with some chocolate golden coins to pass out to her friends at school. While she was gone I decorated the dining room. Aspen came home with her from school, we had a special birthday dinner (ravioli, garlic bread and asparagus–her choices), and mud pie for dessert. 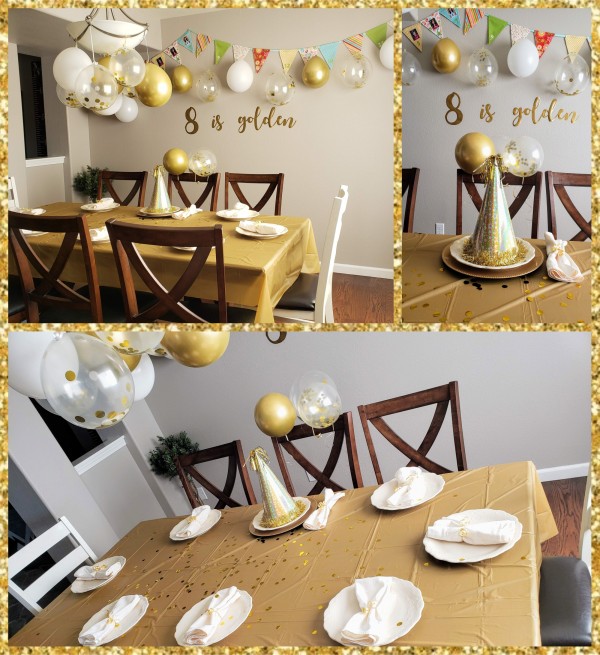 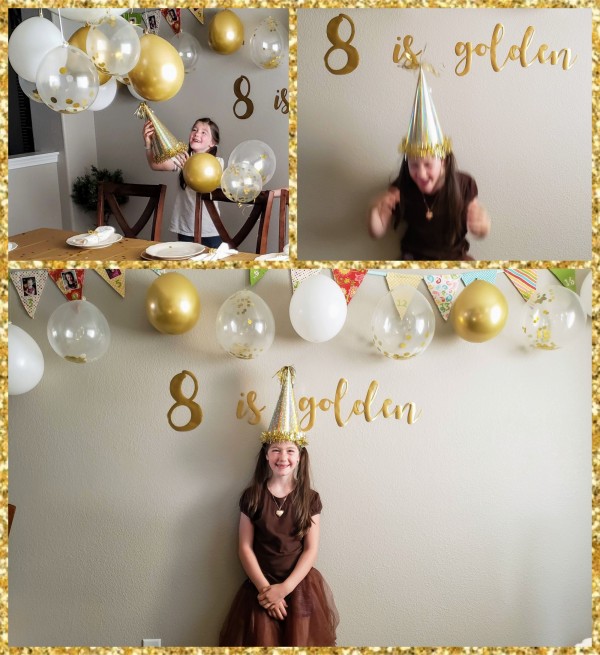 The next day, the Golden Birthday Games began! My parents were able to join us (what a praise and gift!!!!!) and the kids began their competitions…an archery contest, a hula hooping contest, a limbo contest and an obstacle course. (Unfortunately Taylor had online school she had to do during the party. So she was out there with us while Zooming into her classes for the morning…) It was a gorgeous but way-too-hot fall day. The kids tallied up their points at the end and received chocolate gold coins as their “medals”. 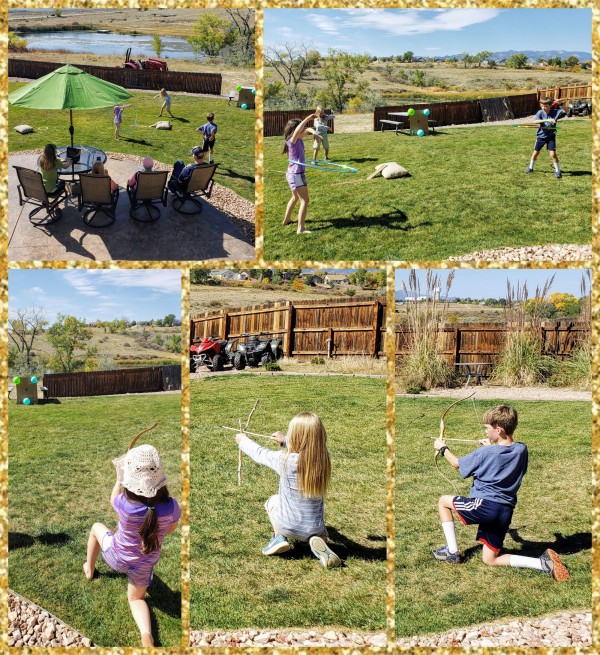 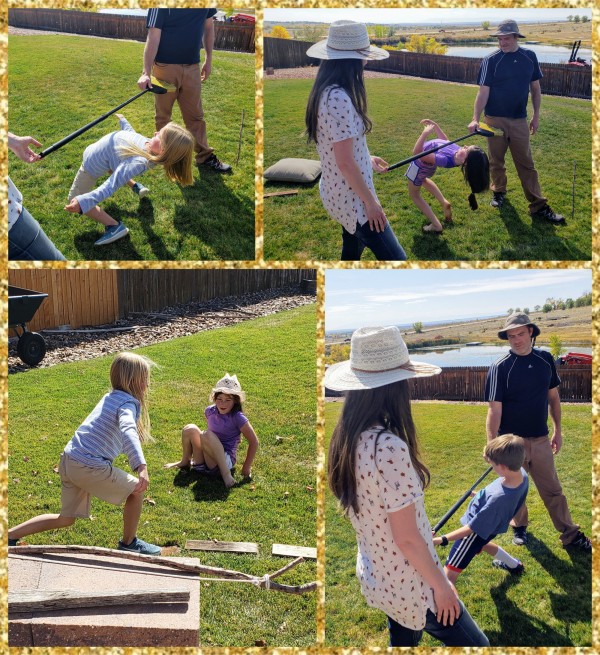 And how perfect that her Olympic rings formed the perfect number… (wink, wink) 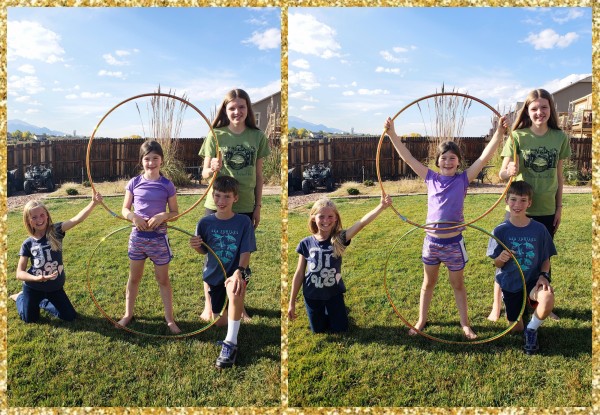 Now, I was trying to figure out how to incorporate her wood whittling request into the party…because whittling wood is about as exciting as watching paint dry on a wall (in my opinion). I just couldn’t figure out how to do a meaningful project that could be started and finished within a short time frame. So…I came up with…wood burning!! Perhaps slightly selfishly motivated (I’ve really wanted to learn how to wood burn but couldn’t justify buying one for myself, ahem), we purchased a wood burner and I tried it for the very first time at her party! Wouldn’t recommend that :). I thought it would be so simple…have the kids draw with pencil on a piece of wood and then trace over it with the wood burner, right?! Well, not quite that simple. I helped Aspen make her way through the project but then spent the next few days playing around with tips until I figured out a much easier way to wood burn. So it went a lot quicker with Elliott, Selah and Taylor. Anyway, it was fun. My vision was to have the kids wood burn a design and then color it in with colored pencils. None of them chose to color them except for Selah, and I think the simple wood burned look looks really neat. I do love how the colored pencils look with the burned wood outline though! Taylor did both the front and the back of hers so she can change which verse she has up in her room at any given time. Here is a little bit of the process along with their final projects: 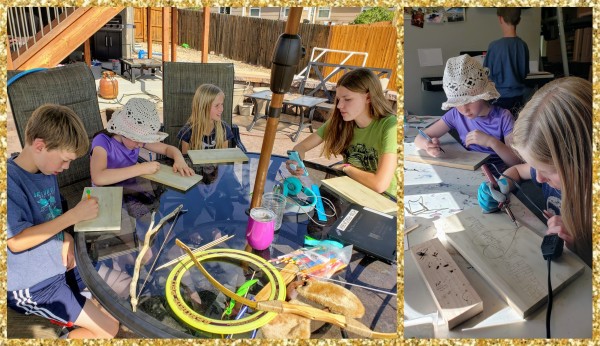 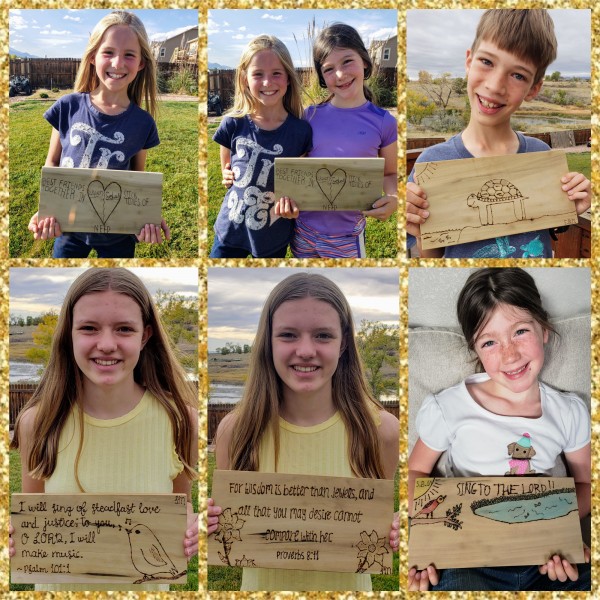 What a blessed little girl she is…she is so loved!! 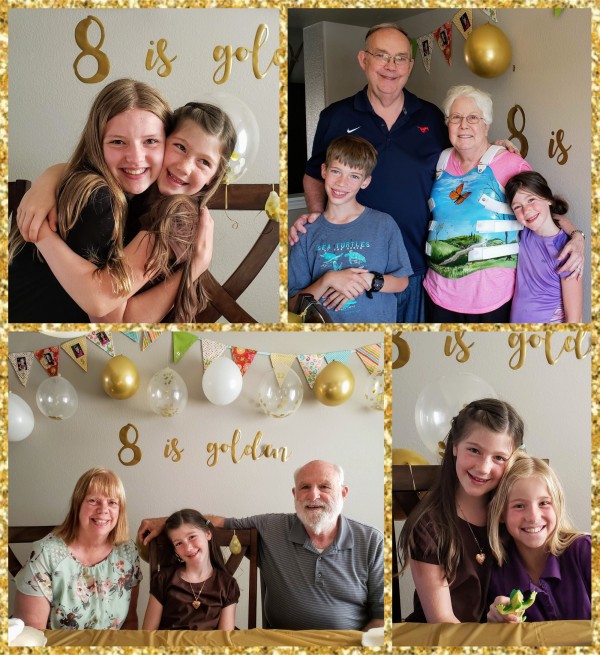 And here she is with her puppy ears. You can’t see the tail, but I assure you, it is there. 🙂 Happy golden birthday, dearest Selah!