Once Upon a Turtle

By Susanne, In Colorado, Elliott, Selah With 5 comments

Once upon a time, the lord of a not-so-faraway land came home after work and, as was the habit, asked his young son if he’d like to take a quick four-wheeler ride. The prince jumped into his cowboy boots and buckled his helmet on while the lady of the land got the princess ready for bed.

But this didn’t turn out to be an ordinary four-wheeler ride. It seemed their Good Shepherd had planned an extraordinary surprise for them along the way: a Western Painted Turtle Mama, digging a hole in the dirt near the lake. 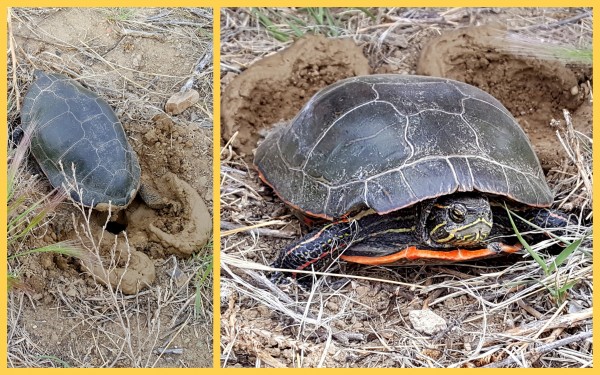 Of course the son couldn’t wait to share this news with the female half of his family, so he and his daddy quickly drove back to the house to get the ladies to share in the joy. All four drove back to the lake to see this amazing phenomenon.

The neighbors gathered round and called upon the all-knowing Google to tell us why this turtle was digging a hole. It was beautiful to watch this mama turtle s-l-o-w-l-y and painstakingly use her hind claws, one at a time, to dig through this dirt that was so hard I couldn’t poke through it with my finger. Shortly after, one neighbor announced, “I think she’s about to lay eggs!” the mama turtle stopped digging and silently dropped an egg into the hole. The children all gasped in amazement as they all watched this laboring mama lay not one, not two, but fourteen eggs into this hole. After each egg, she would tuck her claws in and pack the egg into the dirt hole before laying another one. It was a truly miraculous sight. As we discussed how to mark the nest, the daddy happened upon a piece of trash clearly left over from a shower…one man’s trash is the decor for another turtle’s baby shower. 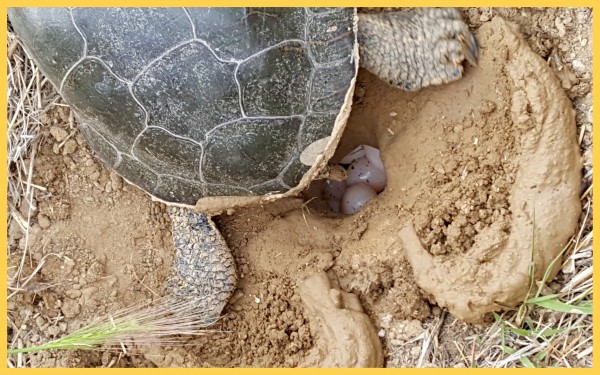 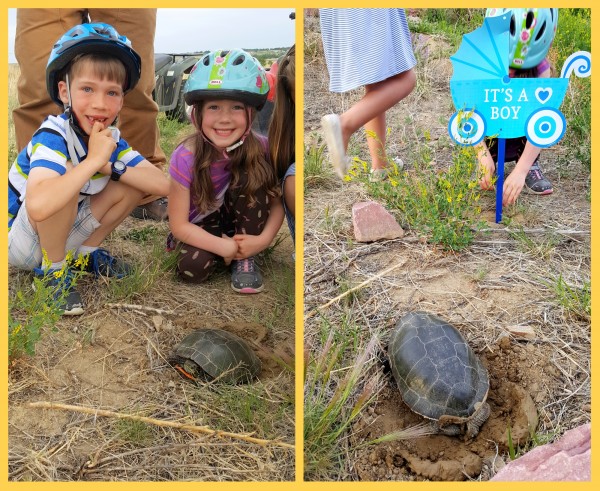 The dirt was SO HARD that the lord of the land had to use a hammer to get it into the dirt. The daddy also placed a large rock in front of the nest so the family wouldn’t accidentally drive a four-wheeler over it.

After the mama turtle had finished laying eggs and started to cover up her nest, every little lad and lady went home to their respective houses. The lady of the land, however, couldn’t resist going back out there to see what this mama turtle would do next. And this is what she found: 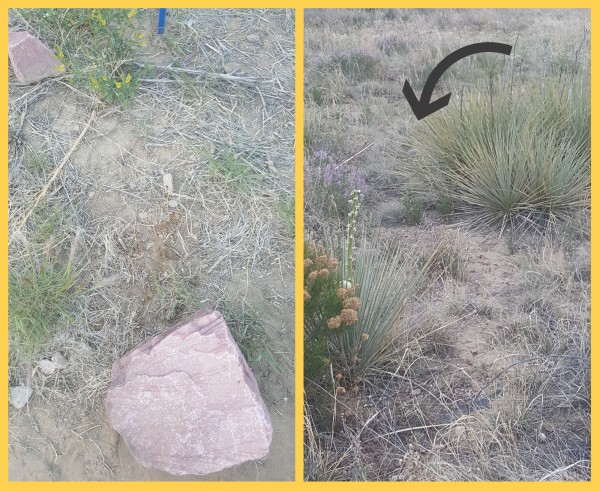 It was a super fun and educational summer researching all things turtles and learning all about them. The prince and princess even wrote and illustrated their very own fictional books about turtles. (And Mama Moberg Publishing was delighted to officially publish their books!) The children counted down every one of the 72 days of their incubation period, periodically checking on the babies to make sure no fire ants had found the nest. And on their “due date” the children awoke and shouted for joy, threw on their clothes and ran down to the lake to check on the babies. Their mama tried to explain to them that due dates are not always accurate, but nonetheless they couldn’t contain their wonder. To their dismay, there was no hole in the dirt where the babies should have dug themselves out. And almost every day the children checked on the babies…for five long weeks.

The lady of the house  spent the summer researching how these baby turtles would find their way home to the pond. She had come across several articles talking about how sometimes the dirt is just too hard for them to dig themselves out of. It had rained a ton over the summer but the ground was still hard as a rock. After waiting five long weeks for the babies to dig themselves out and after watching a video on the procedure…the family decided it was time to do an emergency c-section.

So they called on all the neighbors to come watch the delivery, poured a bucket of water over the nest, and began to gently dig into the dirt with their fingers. It wasn’t long before one cried out, “I feel one!!” And she pulled the world’s most adorable baby turtle out of the dirt!! Several mamas and Selah rotated reaching in and gently feeling around for them. Every time they pulled a baby turtle out, covered in mud, the little guy would take his hand and wipe his own little face off!! It was so adorable!! In the end, they found five baby turtles alive and well!! Five of them had died somewhere along the way. And they couldn’t find the remaining four egg shells, which was weird. Selah spent an hour continuing to dig once the delivery was long over because she was determined to find the last 4 babies.

The first few seconds of the following video are the most exciting. If you watch on, you’ll be able to see one of the empty shells (which at first we thought was a squished turtle!)… 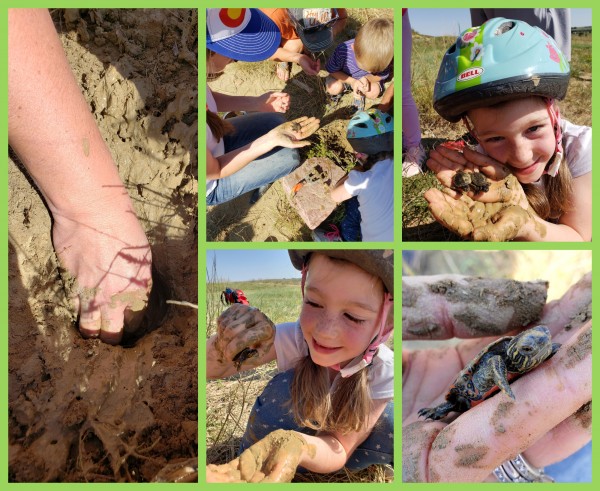 After all of the kiddos got to “oooh” and “aaah” over the babies, everyone headed down to the pond to release them, which was always the plan. 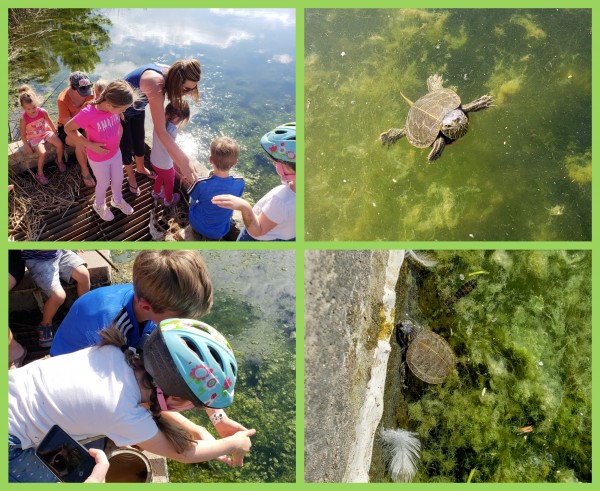 Each sibling pair got to release a baby turtle into the pond. However, can you see the amount of algae in it? Unfortunately, the lord and lady of this land still don’t know how to take care of a little lake like this one (it’s on “The To-Do List…”). It was filled with algae and everyone was afraid the turtles would get entangled in it. But the lady of the land assured them all that the turtles would know what to do…

That is…until she watched one baby turtle trying to swim and realized that he couldn’t! Gasp!

She cried out to the lord of the land who, to her surprise, said they could keep a couple turtles for a couple days to alleviate her fear. Overjoyed, she pulled three babies back out of the lake, two who were completely tangled up in the algae and the one who couldn’t swim.

They told the kids who, obviously, couldn’t contain their joy. They asked if they could go find the other two. After searching through heaps of algae, they found the last two baby turtles completely entangled in the algae. It seems pretty clear that they would have either died of starvation or been eaten alive by the next duck that came by since they couldn’t swim away! 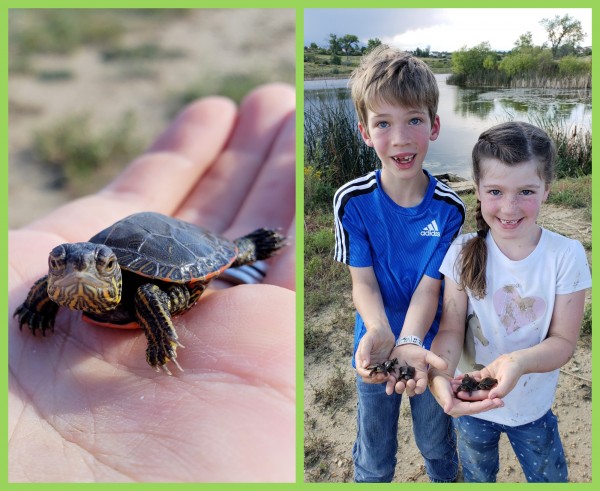 The family’s neighbors fortunately had an extra tank so they made the baby turtles a little home within their home, safe from predators and strangling algae. 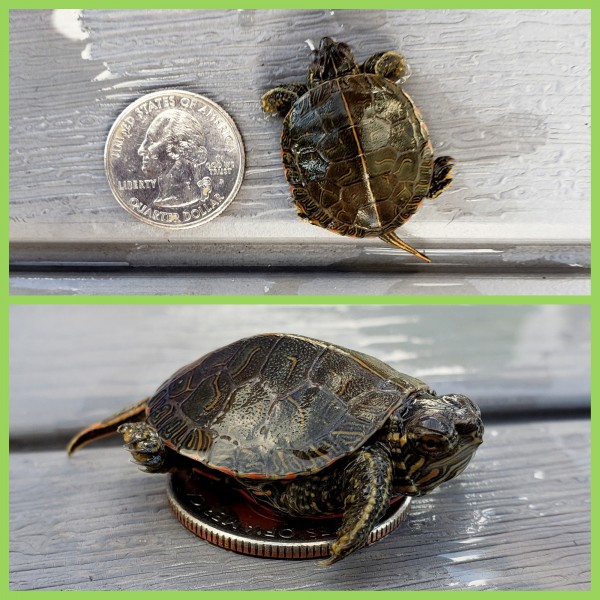 The next day princess Selah discovered that their marking on their bellies were unique–and so they were able to name the newest members of their family.

The family is still trying to figure out when/how to release them back into their natural habitat. But for now, the family is living happily ever after, enjoying the world’s cutest baby turtles…who hold hands, snuggle and make totem poles all the day long!