By Susanne, In Colorado, Elliott, Family With 4 comments

So Elliott started planning his birthday months ahead of time (as usual) this year. All he wanted to do was have his friends over to play tag and have a picnic on our property. So simple, right? Well, this girl just could NOT get the unction to plan it. I kept putting it off and putting it off and although I wasn’t entirely sure why, if there’s one thing I’ve learned in life it’s this: If I don’t have unction, there’s usually a reason and I shouldn’t force it. Well, of course…little did we know that the entire world would shut down and there would be no live birthday parties this spring.

But our gracious God allowed us to have our nieces and nephew and grandparents here with us over Elliott’s birthday! Talk about a party! I threw some ideas together and we were all able to make a really special birthday for this mighty 9 year old. It’s no surprise that this guy still loves turtles. So we turned our dining room into an under the sea fish bowl and this guy was thrilled. As a side note, SUCH a treasure for me to have Taylor here to help me decorate and make this a turtley awesome birthday for Elliott!! Taylor made all of the plates :). 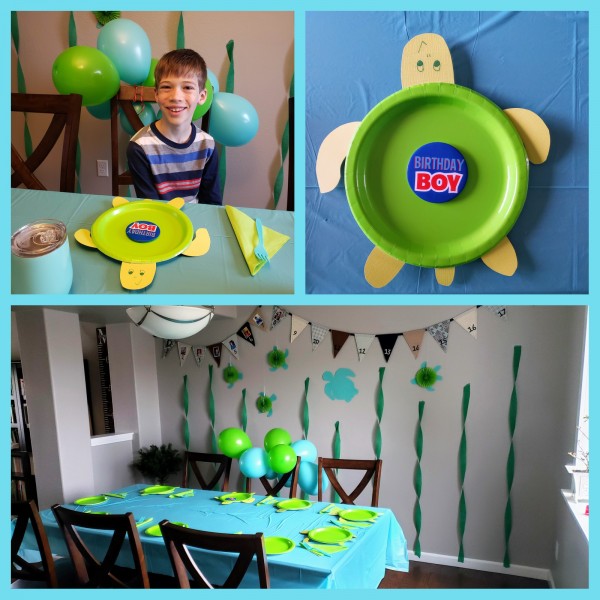 We started off the morning with waffles, due to Elliott’s request. Side note: Anyone notice what Elliott’s NOT wearing??? Comment if you figure it out :).

The cousins worked secretly to make Elliott a turtle shell out of a box so that he could have his very own shell, just like all of his turtle friends!! He was SO.HAPPY!!!! 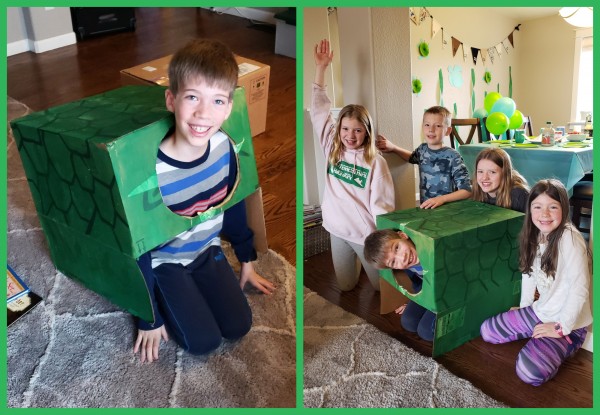 We did get a game of tag in, albeit not the most epic game of tag in the world. It was FREEZING outside…NONE of us wanted to join a very eager Elliott for a game of tag but we all bundled up and went out there anyway. I may have lasted 32 seconds. And then I took photos from inside. Hey, someone’s gotta do it :).

The quick last minute idea I came up with was to have a canvas painting party. Thanks be to Amazon, everything we needed for a paint-your-own-art-piece arrived promptly at our door. I talked to each of the kids about what they wanted to paint. For a few of them, we printed off pictures that they wanted to use as a reference. I helped guide the ones who needed it through sketching out their drawing first with pencil and then we got to painting! 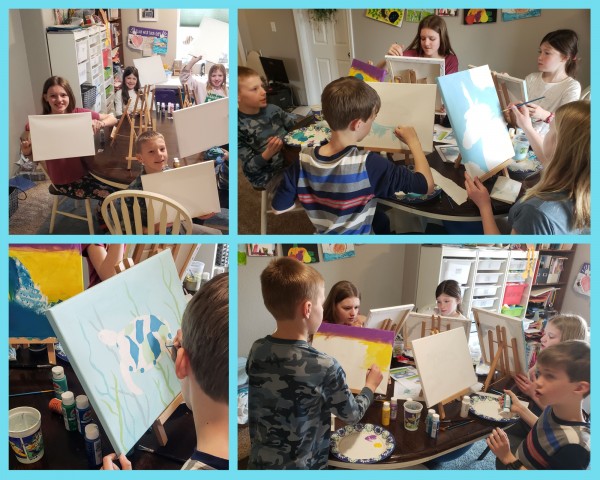 They each did such an AMAZING job!!!! I love how each painting displays the incredibly unique personality of each kid. 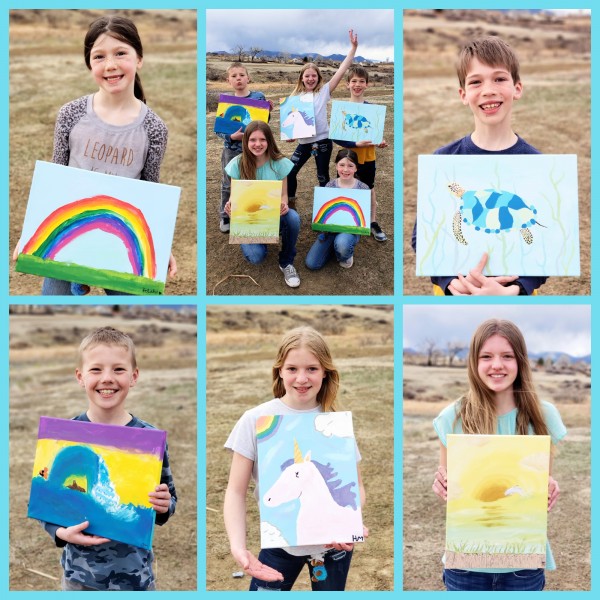 Elliott is just a little bit (ahem) detail-oriented and so he’s very particular about what he wants to be doing the MOMENT he was born, which is 6:25 pm our time. This year, he was emphatic about wanting to do our bible reading over that minute. So we made it happen. Wearing Christmas jammies. Because CHRISTMAS. This is him the MOMENT he really turned 9! 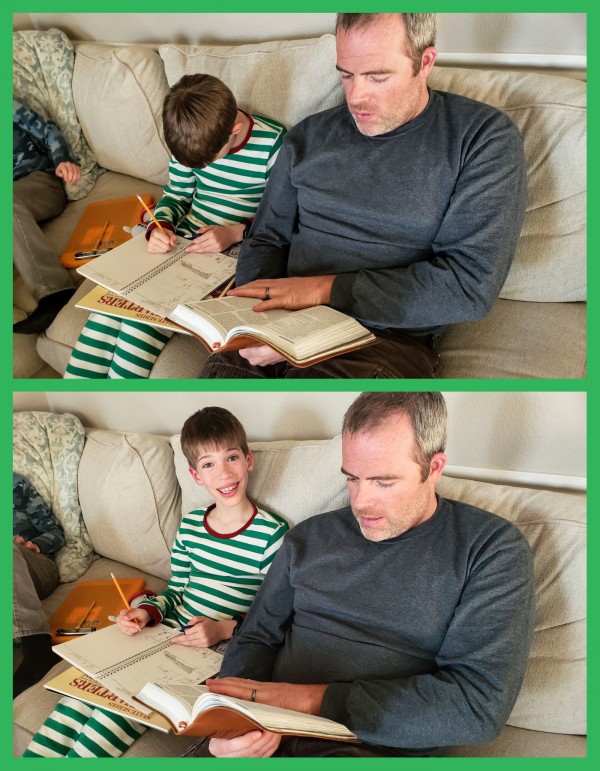 Speaking of Christmas… For some reason I had a slightly difficult time saying “Goodbye” to our Christmas tree this year. It was just so green and beautiful and I couldn’t bring myself to slaughter it. Finally at some point in late January I decided it was time. The kids and I started chopping off branches and when we had done the bottom 2/3, I stopped and looked at it and just LOVED it! It was so cute! So we kept it like that for another few months. First year ever our Christmas tree was still up for Elliott’s birthday. So, obviously, we put his presents under the tree!! 🙂 This kid is THEE most expressive child on the planet. Check out these faces as he opens presents!! (And don’t make fun of the Christmas tree! Come on, it’s kind of cute, isn’t it?!!) 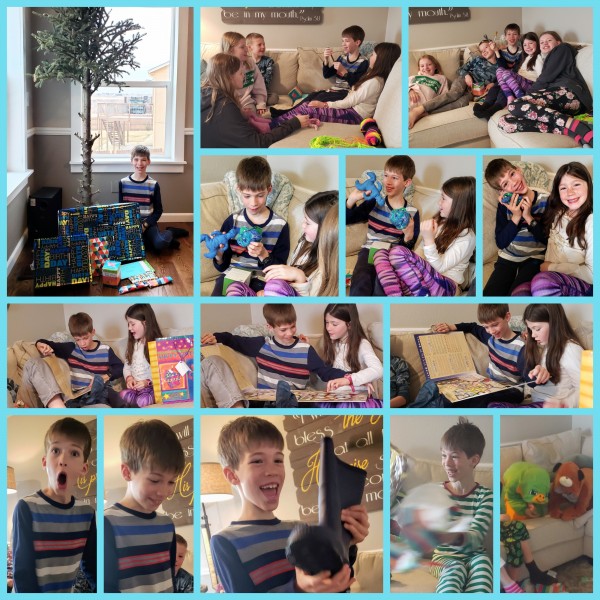 Selah really, really, REALLY wanted to sew Elliott a turtle stuffie. So we worked together and, it wasn’t horrible. 🙂 It consists of a separate body and shell so he can change out the shell! However, it took us SO.MANY.STINKIN.HOURS to just make the body and the shell that right now his turtle only has one change of clothes. One day he might have two. One day long in his turtley future.

Next up, mud pie. The kids got the brilliant idea to stack three more paper plates on top of the base turtle plate so they could “re-use” their plate for each meal. They just threw away the dirty top plate and used it for breakfast, lunch, dinner and dessert! 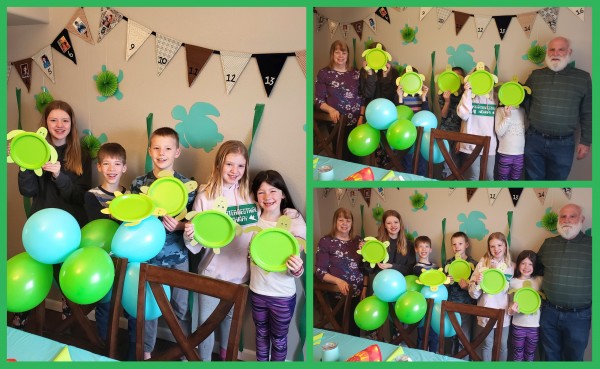 Grandma and Grandpa got Elliott the turtle costume he has been dreaming of ever since we got Selah a puppy costume for her birthday. Have you ever seen a happier turtle in the sea? I sure haven’t. 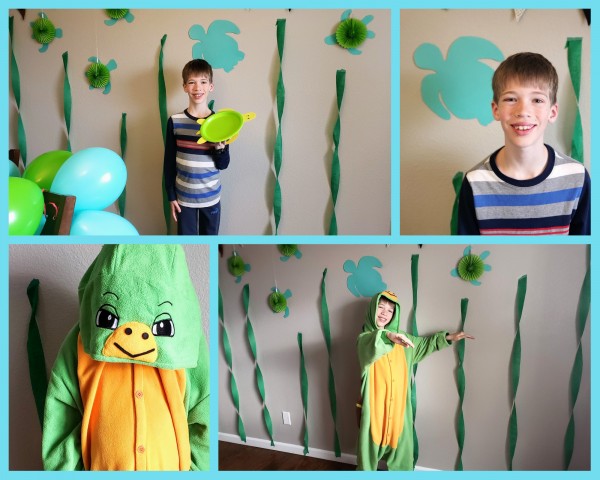 One quarantine birthday in the books!! Although he was definitely bummed not to get to celebrate with the Mauss family and friends, he was abundantly, over-the-top blessed on this quarantine birthday of his! We were so thankful for the special treat of the Moberg cousins and Grandma and Grandpa. Happy birthday to our turtley awesome mighty man!!