By Susanne, In Elliott, Family, Selah With 4 comments

I am convinced that a couple of stir-crazy kids invented the sport of skiing after being quarantined for a number of months. I mean, seriously. “I’m bored. I have an idea! Let’s go to the very top of a mountain where you could easily fall to your death with one wrong step. But let’s make it more of a thrill and go when the mountain is covered in snow. No, this isn’t enough. Let’s put long slippery pieces of laminated wood on our feet so that we can’t get a grip on the snow but will slide right along it, making it easier to fly off the side of the mountain.” Great idea, folks…great idea.

I think anyone who knows me by now knows that skiing isn’t exactly my strength. Enter photo #1: 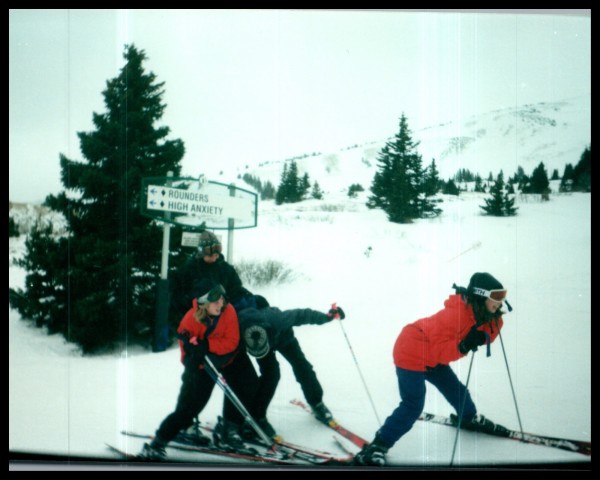 Do you see that baby deer wearing a red jacket on the right side of the photo? Yeah, that’s actually ME the last time I went skiing, circa 1998. We were trying to pose for a photo but I couldn’t STOP! Because someone had strapped long slippery pieces of laminated wood onto both my feet!!!! There my friends are, laughing so hard at (with?) me as I frantically slid down the mountain. One of my favorite parts of this photo is the sign above our heads. Do you see it? “High Anxiety”? Case in point. Someone invented the sport of skiing after months of not thinking straight during quarantine. Case closed.

Brian’s parents so generously invited the entire family on a ski vacation in Idaho and, to tell you the truth, I was actually pretty excited to give skiing a shot again. I mean, come on, grace and eloquence must increase with two decades of maturity and growth, right?? Well, let me just skip right to the end of my story: WRONG. Apparently thinking happy ski thoughts wasn’t enough. My sweet friend kept telling me before going, “It’s just like ice skating!” Yeah…ice skating on the side of cliff. Definitely a pastime of my dreams. But Brian loves to ski and the kids had never been, so we were eager to take our family’s very first ski vacation!

And, it was truly a WONDERFUL vacation, despite the fact that apparently skiing and I still don’t play very nice together. The timing of the vacation was honestly so perfectly orchestrated by our great God as it was in one of the last states to shut down and we were there essentially the very last week before everything did shut down across the US. What a gift to have a big, fun family hurrah right before our country closed. Here’s a glimpse into our family’s very first ski vacation with the entire Moberg crew.

We flew into Tacoma and drove with most of the family over to Idaho. Angela and Tony met us there from Oregon. We bundled into two cars and the kids got cherished car trip cousin time.

We stayed in a great condo. We could hop right into a gondola from the front of the condo that took us straight up the mountain. 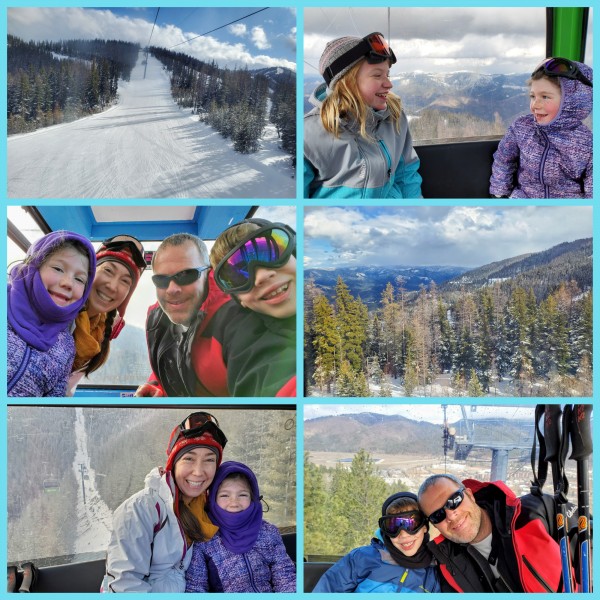 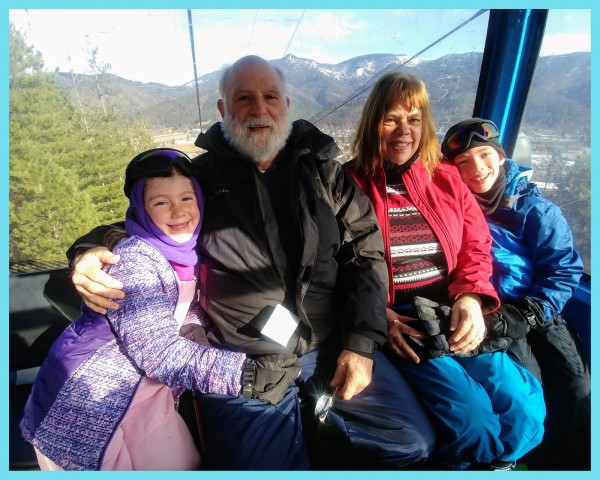 Here is the entire crew (minus Grandpa, who’s taking the picture) at the beginning of the first day! This is at the top of the bunny slope. There was a conveyer belt that would take you back up to the top once you skiied down. Isn’t the view amazing?! It was breathtaking. 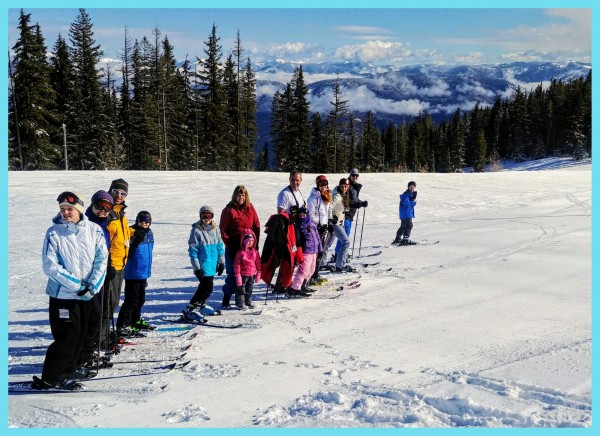 We (and by “we” I mean “Brian,” the only competent skiier in our family) started both the kids off with a leash (I know, how embarressing, right?) because, if you’ll remember correctly, we dragged our children to the top of a snowy mountain and placed slippery boards on their feet. The least we could do is put a leash on them. After they had proven many times they could go down in a controlled way, we took off the leash and let them free on that bunny slope. Once we felt good about their bunny slope skills, Brian took each kid individually down a real slope with the leash. Once he felt confident they could each stop themselves from flying off said slippery mountain on their own, he let them go down sans leash. The kids really did AMAZING and were both very confident skiiers by the second day. They had an absolute blast and are in love with the sport of skiing. Did I mention they didn’t get that gene from me? Here is a little video I put together of their progress from day 1 till through day 5. Be sure to put on the Close Captioning if you want to see the captions I wrote in.

At the end of each ski day, we headed back to the condo. We would play games and relax for a (very small) bit. By the way, here’s our resourceful engineer of a grandpa for you–no coffee filter? No problem. Use a a grapefruit! 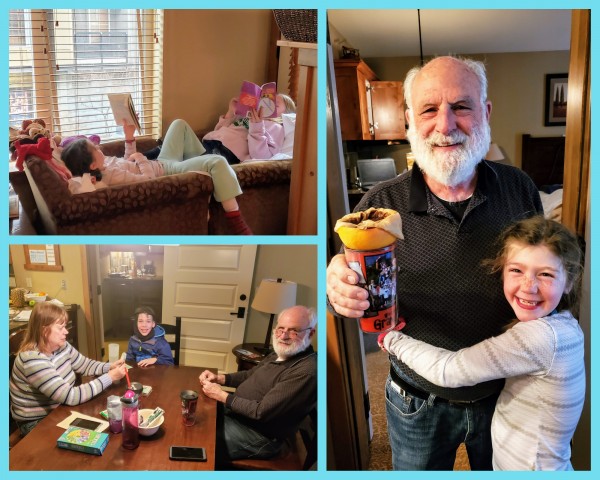 Each family unit took turns preparing a meal for the whole group. After dinner, we usually headed to the condo’s indoor water park. Because after a full day of skiing people apparently need to get even more energy out?!? It was a super fun little water park and everyone had a blast. So keep in mind, this is the very beginning of March as things are slowly starting to shut down in the US. While floating in the lazy river, the kids would throw a tube on eachother and say, “You’re quarantined!!” We had no idea that was only the VERRRRYYYY BEGINNING….. 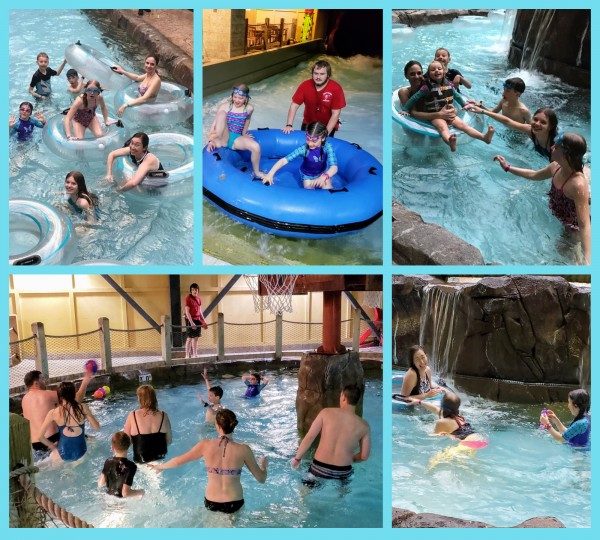 Here are a few more fun photos from skiing that week. At the bottom of the bunny slope the kids spent some time digging a couple tunnels into this mini mountain. What a perfect vacation! 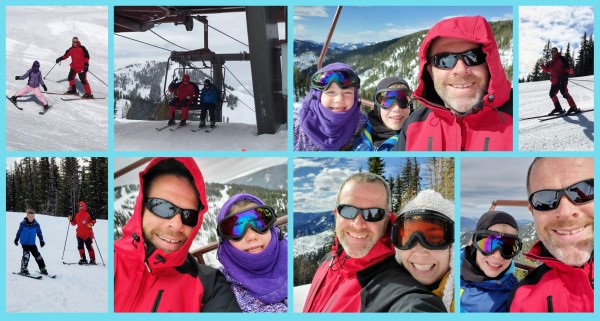 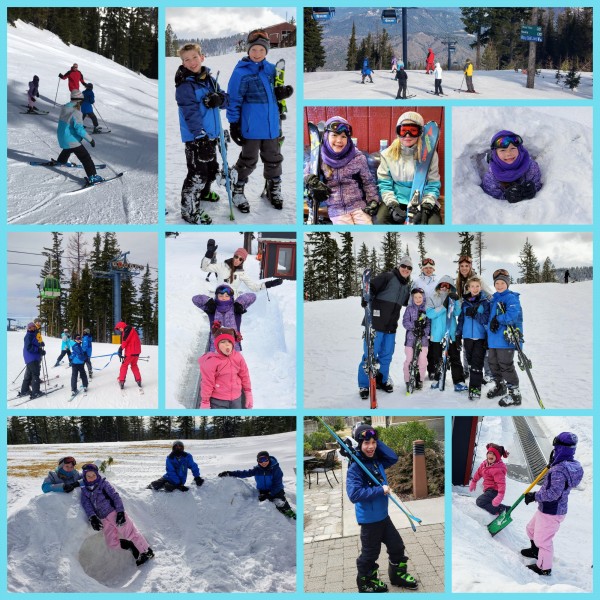 So the picture on the left is at the very beginning of the first day. A little scattered and hard for the kids to stand up. By the end of the first day they were SO much more confident but when we went to take a photo, both the kids accidentally slid down the mountain. (Upper right corner.) Thankfully Uncle Tony was there to rescue them. And we got the more composed (bottom right) picture…as long as the kids were hanging on. So maybe they did get some of my genes after all. 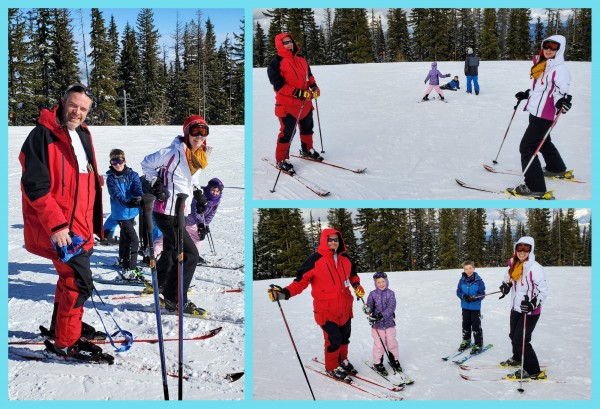 This about sums up our week…hahahaha!! Thank you, Grandma and Grandpa for a most thrilling and fun vacation!! 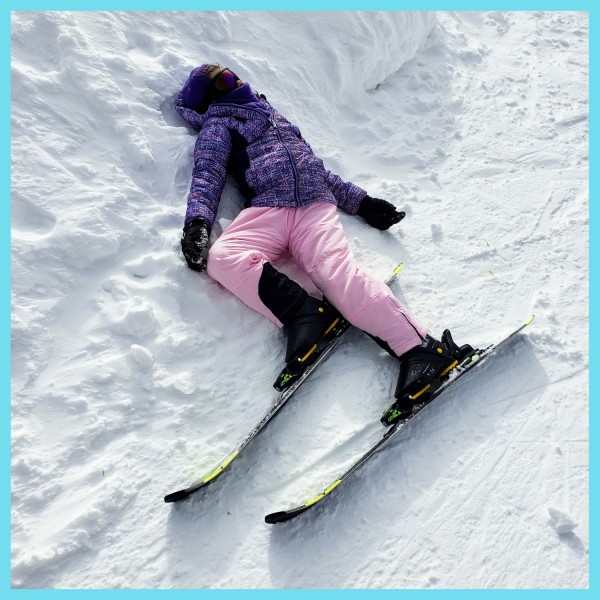