By Susanne, In Selah With 2 comments

I know this is the weirdest thing on the planet to blog about but Selah makes everything SO hilarious that I want to document this little milestone. AND, I’m certain she will thank me in 20 years…right?!! 🙂

Thanks to Selah, potty training her was an experience that had me in stitches throughout the entire process. I’m a big fan of WAITING to potty train, mostly because…here’s a little secret about me: I love diapers. And I mean, LOVE them. I think they are incredibly convenient and they just truly don’t bother me. Selah had been showing signs of being ready to potty training since long before she was 2 (in fact, a few days before her 2nd birthday she asked if she could sit on the potty and she got out both her pee and her poop!) So I thought I would have a self-trainer on my hands. Well, she didn’t self train but just picked and chose the days and times that she wanted to use the potty. I tried VERY half-heartedly a couple of times to actual train her, but one puddle on the floor was enough to send me back to buying stock in diapers. Sure enough, around 2 1/2, she started using the potty very regularly (on her terms). One evening during dinner Elliott went to the bathroom and then she jumped out of her seat and said, “Can I go potty?!” I said, “Be my guest…” and so she went upstairs to the available potty by herself, took off her diaper by herself, and went to the bathroom. It was that day that I realized I needed to just bite the bullet and train the girl.

I set up a little incentive…7 purple papers that led to a baby doll stroller which she really wanted. 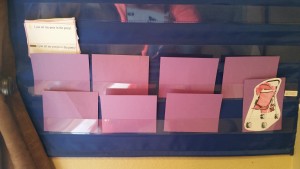 7 purple squares=the glory of the stroller 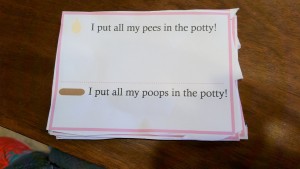 Like the visuals? 🙂 I let her cut them out herself!

When all the squares were filled up she got to go pick out a stroller!

Here was thing about her going potty. Somehow, she would manage to not only get pee in the potty, but also all over the floor of the entire bathroom, the seat, and the back of the toilet. I’ve never seen anything like it, and it would make me laugh so hard (Brian didn’t quite feel the same way, HA!!). I mean, seriously though…that requires talent! How is that even possible?!!

It took me a few days of that to realize that as soon as she would start to go pee, she would want to watch it come out so she would stand up mid-stream…hence, the pee flood.

Speaking of which, every time she would go to sit on the potty she would beg me to let her pee standing up (like her big brother). And when I would tell her, “no…” and that “ladies sit to go to the bathroom”, she would break down into a puddle of tears.

So, after teaching her to remain seated for the entire performance (have you ever seen that sign in a public restroom?) I went in one day to find ALL of the pee…INSIDE the toilet! THAT was a big day! I began to praise her and she enthusiastically interjected: “I got pee on the floor and the seat but I just wiped it all up!” She has left the potty SPOTLESS ever since that day.

She has preferred (and been much more successful) going to the bathroom alone, which is why I haven’t been in there to monitor the pee antics.

After two successful days of no accidents, I pulled out a little surprise that I had been saving for her…a purple princess dress for our purple-loving princess!!

Here are a few quotes that kept me laughing throughout the entire process:

*After pooping one day, she stuck her head in the potty, examining her poops, and said: “OH!! One is a turtle and one is a monkey climbing up a tree!”

*Calling to me from the bathroom: “Mommy! The poops got ON the potty!!” I went into the bathroom to find her standing there studying the toilet and the poop that was smeared on the seat. There was also, incidentally, NO poop actually in the potty. I said, “Hmmm, how did you get poops ON the potty, but not IN the potty? Where are the poops??” Selah, wrinkled her eyebrows, peered into the toilet and said with utmost compassion, “Them prolly (probably) asleep in the hay…” (I then proceeded to wipe her and found said poops hanging out of her bottom…mystery solved!)

*One day after pooping she (again, studying her poop) says, “Oooooh!! A carrot!!” “Well, actually that’s a red pepper,” I replied. She responds, “Oooooh!! A red pepper!! Why a red pepper??? {pause, as she proceeds to answer her own question} That’s because the poops are hungy (hungry) so they eat the red pepper.”

We also had several incidents in public, like the time I was so focused on making sure her hands were washed that I forgot to remind her to pull up her panties. So she waddled out of the public bathroom in her dress with her underwear around her cowgirl boots! It’s like the Selah version of tucking your skirt into your underwear :). She just somehow never ceased to make potty training funny!!

So…several pee floods, many, many poop stories, and tons of laughs later, we had a potty trained little girl! 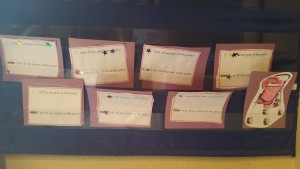 She got really tired of putting stickers up after the first two days so she just would end up putting one on each section at the end of the day if she had had no accidents. 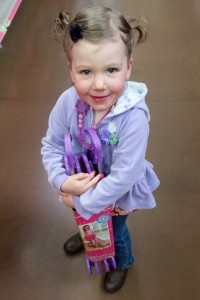 She held it and wouldn’t let it go! 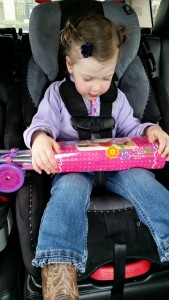 She was silent on the way home, just staring at her stroller like this! 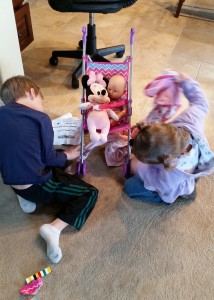 She and Elliott immediately took it out of the packaging and worked together to get it set up and get some babies in there asap! 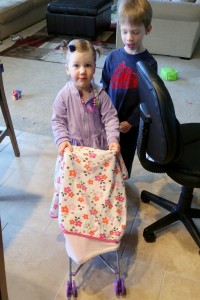 Ahh, and I forgot to mention that Brian was SO pleased with how quickly and how well she learned to use the big girl potty that he broke down and picked out her very first Lego set for her, too. This girl LOVES Legos because her big brother loves Legos…its super special that now she has her very own little set to play with. Here they are putting together her new little Lego car!

We are so proud of our little girl!!