By Susanne, In Elliott, Party Time With 2 comments

I will admit, I sort of dreaded March 20th this year. I am definitely a little sad that my baby boy has left the TWOS. I have LOVED watching him grow this year. Whereas when they are one I learn so much about their personalities, it is while he was two that I got to see so many glimpses of his heart blossom. Yes, I realize that I will only get to see more and more as the years go on, but it was a sad farewell for me on March 20. This past year, I have watched his passions ignite and his heart soften. I have watched his love for people increase and his hunger to know the Lord and His word grow. He still carries a unique love for balls of all sorts but is fascinated with big trucks and wants his daddy to tell him about every truck he sees. “Daddy! Know this truck ‘dues’?” he asks each time. He still LOVES to read and could sit and have you read to him all day. He could be in the middle of almost anything, hear one of us reading to Selah in another room, and he will come RUNNING to snuggle in next to us and listen. He has memorized a few of his (long!) books and will often “read” them to us. He is still a puzzle genius. He loves applesauce. He always wants one of us to “sit close by me!” during meal times. When Brian eats his breakfast “on the go” (which happens often), Elliott will say, “Daddy, will you please sit down? Close by me?” I’m usually his dinner favorite 🙂 and it’s not enough to be sitting about a foot away from me. He’ll turn to me and say, “Mommy, please scoot me close by you?” and I will pull his chair over until it is touching mine. Usually what follows is a sweet boy cuddling up to my arm, looking up to me and saying, “Mommy I ‘yove’ you. AND I ‘yike’ you.” He melts my heart and amazes me every day. 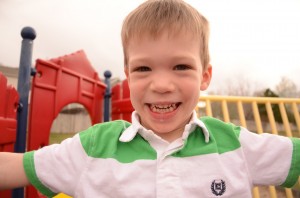 A big three-year-old hug! (Drool and all…)

One of his favorite things to do is be a “Working Guy.” For months and months now, he’ll put on his hard hat, grab his tools, announce, “I’m a working guy!” and go “fix” something that’s “broken” in our house. It’s usually the chairs around the kitchen table that need fixing…almost daily :). So we decided to have a Working Guy birthday party with 3 of his favorite buddies (unfortunately, his friend Mookie couldn’t make it at the last minute but I’m sure he’ll be over soon to be a working guy with Elliott) and then we had a family Working Guy birthday party where he got to (start) building his very first REAL Working Guy project with his daddy…a soccer goal!!

I tried to keep it SIMPLE!! Yay, me!! 🙂 Parties just bring out this addiction in me (seriously, I think it might be an addiction!!!) that makes me want to go all out. I LOVE to celebrate and I LOVE a good party. So, being as we decided a week and a half before his birthday to have a party I was really forced to keep it simple. I’m pretty proud of myself :). One of the best parts? USING MY BRAND NEW SILHOUETTE CAMEO!!!! Seriously, this thing is amazing. Definitely added to the “life-changing” list. With just a few strokes on the keyboard and the click of a button, the machine cut out ALL of these signs FOR ME!!! Oh, it’s a brand new day in the party-planning world :). 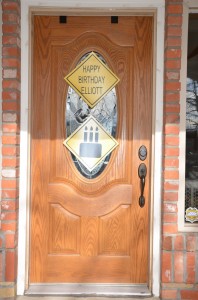 Welcome to the Party! 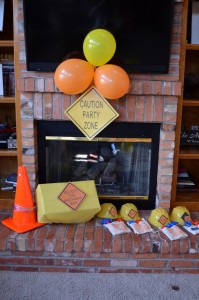 Elliott’s first present and his friends’ gear for the party! 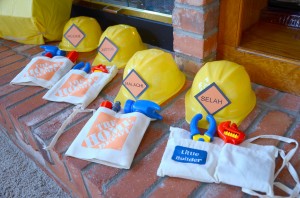 Come on, now…how adorable are these? Each Working Guy (and Selah the Working Girl) got his/her very own tool belt complete with tools and personalized hard hat for the party. 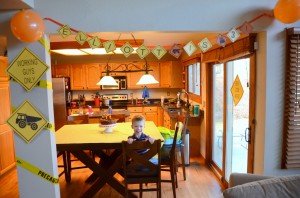 The birthday boy, wearing one of his daddy’s old shirts from when he was a kid, eager for the party to start! 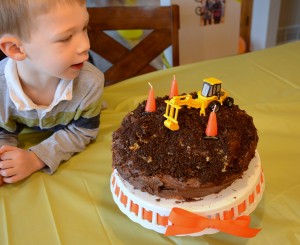 That morning, we asked Elliott what he was most excited about now that he was 3, and he said, “I get to eat CAKE!” 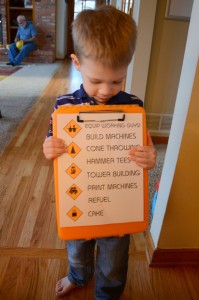 The foreman, reviewing the projects of the day. 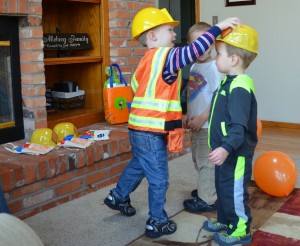 Elliott opened his first present from us (a REAL working guy outfit!) and then equipped his working guy friends with their working gear. (**Note: I thought the tool belts and hats were the COOLEST things ever but there was never even ONE moment, literally, during the entire party where they all had on their gear at once, haha! But I did catch one moment on camera where they were all at least wearing their hard hats (you’ll see that below)! Things you learn after throwing a birthday party with three year olds :)) 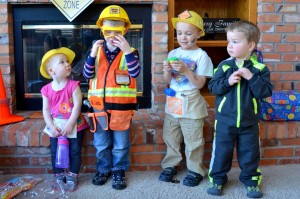 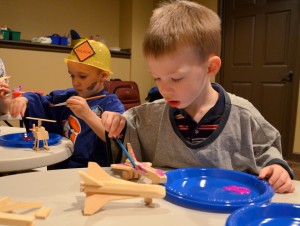 They “helped” Brian build model machines and then painted them to their liking. 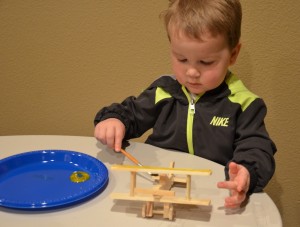 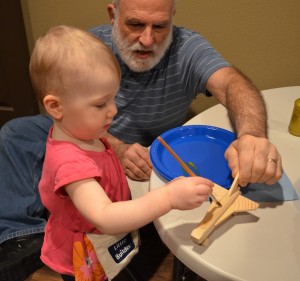 Selah INSISTED on doing everything the boys did, and so after not falling for “pretend painting” we finally gave her some real paint to paint with, too. 🙂 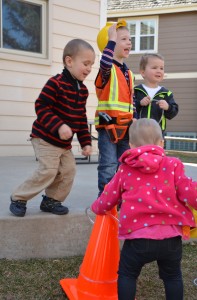 Next, we had the ring toss. 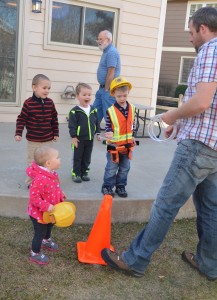 Each boy got a ring around the cone at least once! 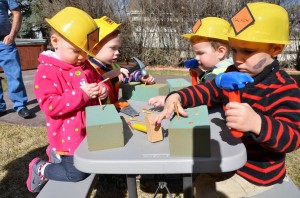 They hammered golf tees into foam (for SURE the hit of the party…get it?? “hit”?? Haha…) 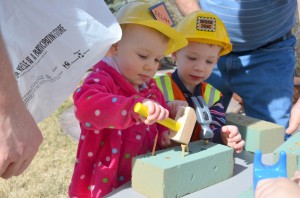 This working girl learned the ropes from her big birthday bro! 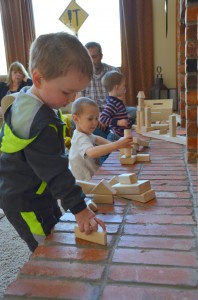 And lastly, they refueled with some yummy lunch and, of course…CAKE!! 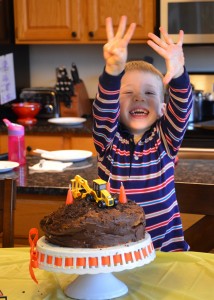 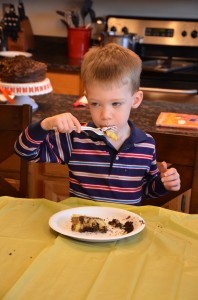 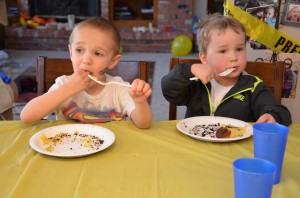 Those working guys needed some CAKE! 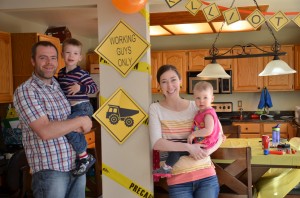 A few days later we had a “family” birthday for Elliott with both sets of grandparents there! Elliott started construction on his very first REAL working guy project…a soccer goal made out of PVC pipes! 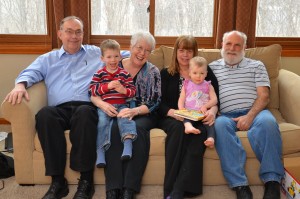 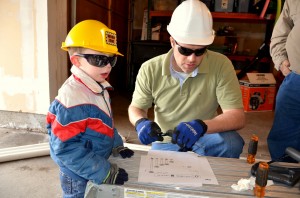 Checking the plans with Daddy… 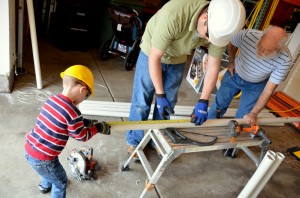 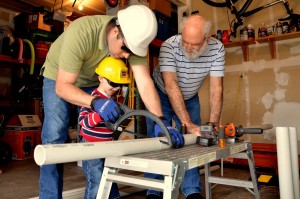 And sawing with Daddy and Grandpa. WHAT a WORKING GUY HE IS!! 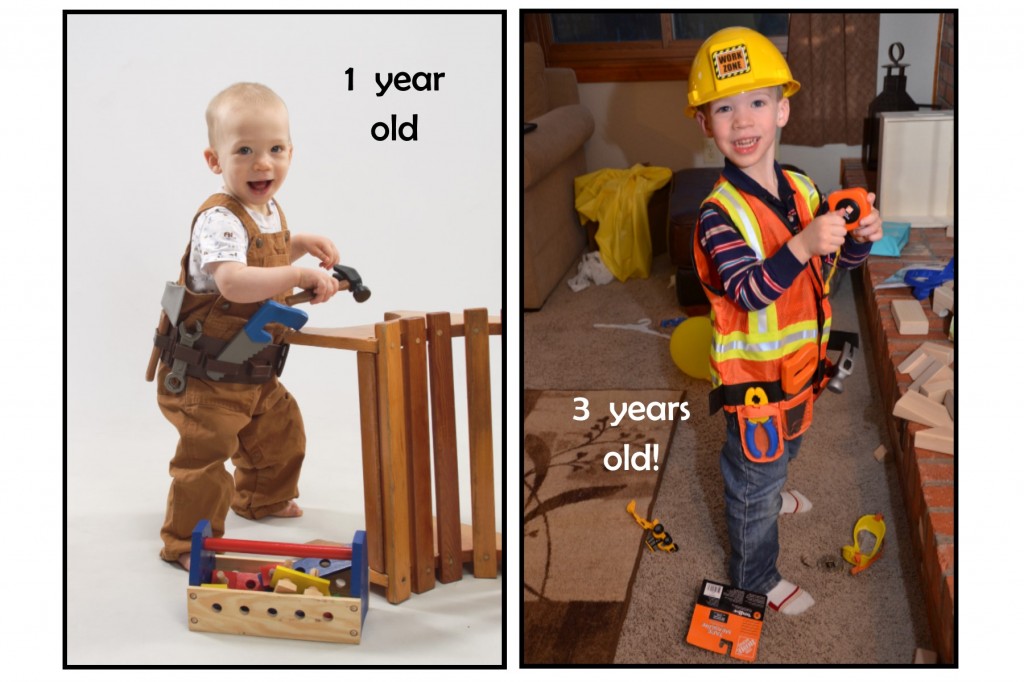