You know what comes next, don’t you? I can barely even type the words…

Elliott continues to be a crawling, climbing, laughing, smiling, babbling bundle of contagious joy. He’s been working hard this month on feeding himself real food, repeating sounds, trying to do everything we’re doing, and learning how to stand on his own.

He’s been super close to standing on his own for a while, and he’d do it for mili-seconds at a time, but at the beginning of February he started FOR REAL standing on his own. He was standing, playing with his Alphabet Train and just decided to let go! We both started clapping and then he thought that was the most fun game ever. He would just stand there and clap and laugh with us as we cheered him on. He did it so many times before it occurred to me to get the camera so I jumped up and grabbed it and captured this beautiful moment: 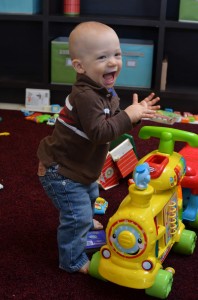 Possibly my favorite picture of all time. I love his joy!!!!!

Bath time is becoming one of Elliott’s favorite activities. For those 8 weeks we were traveling over seas we just showered with him because there were no tubs available. So, when we arrived to Tacoma to stay at my dear friend Courtney’s house, we were overjoyed to have a real TUB. We put him in it, and…he cried. A LOT. But he got used to it within a few minutes, and after about 15, splashing in the tub was his new favorite.

The thing I love most about our new house is our bathtub. It is incredible. I’ve never seen a bathtub like this–it’s SQUARE! And huge! So bath time is like swimming in a swimming pool :). 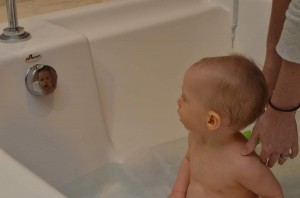 His favorite part is looking at his "friend" in the metal mirror...he usually gives him lots of kisses :). 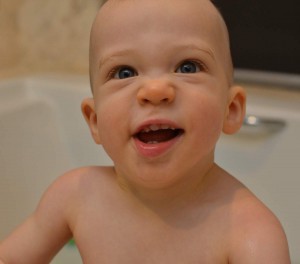 I LOVE this picture because it shows all of his teeth! 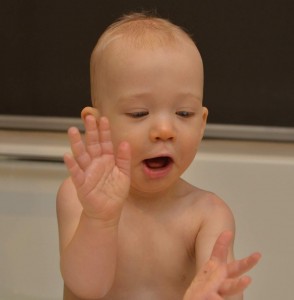 This makes me laugh 🙂 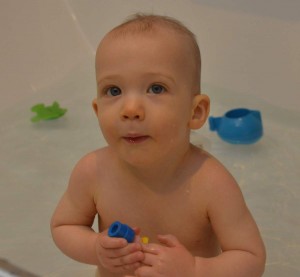 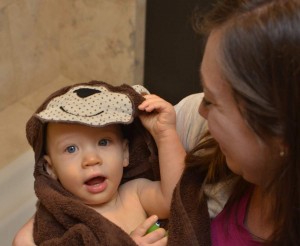 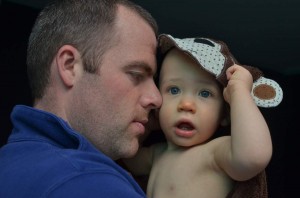 Eating has continued to be quite a steep learning curve…he still gags and chokes when we try to give him food other than purees. But since he loves doing EVERYTHING we do these days, he always wants to eat what I’m eating. So one day when I was eating a pear and he wanted some, I figured I’d let him try a few bites… 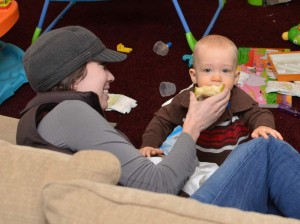 And he did AWESOME! No choking or gagging, and he wanted more!!

I KNOW we need to work on this skill, so one day I gave him small pieces of banana and he gagged on them and threw up. So then it occurred to me to give him a big chunk of banana (totally counter-intuitive, right?) because he LOVES taking bites of my pear. Sure enough…he safely ate the whole thing without gagging even once. Doesn’t make any sense to me, but I’m just going along with it… 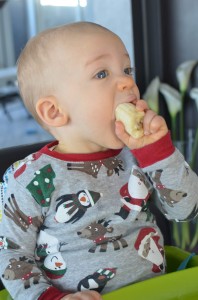 Yes, those are Christmas jammies. Because we LOVE Christmas in this household and it WILL be celebrated year-round!

Some playful parts of the month:

A good family friend, Sherrie Paul, sent Elliott this A-MAZING alphabet book…he LOVES it (almost as much as I do!) 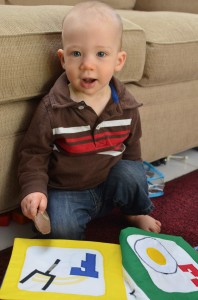 His favorite page is the "F is for football" page (You'd be proud, Coach & Mrs.!) 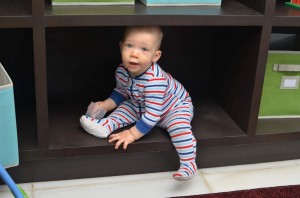 A little photo shoot that we had with Auntie Melisa: 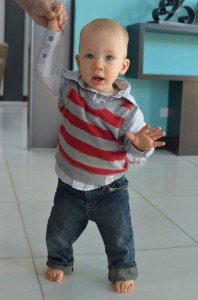 Learning to walk with one hand 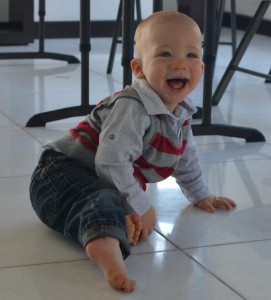 Laughing so hard at Melisa's silliness

This is his new favorite way to sit.

Now for some less-glorious parts of the month: 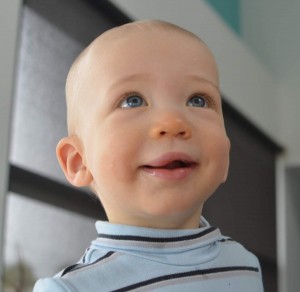 Have you EVER seen a fatter lip than this one?! 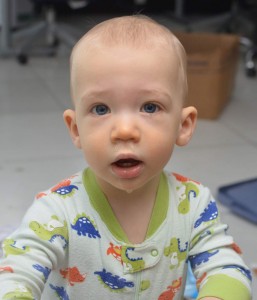 He had a cold for about a week, and this was what he constantly looked like...a snot moustache and a drool goatee...

And, last but not least…a few of my favorite Elliott faces from the month. For some reason, the nickname I hear Brian and I call Elliott the most lately is, “Buddy Face.” No idea how that came about, but here are some cute faces from The Buddy Face himself… 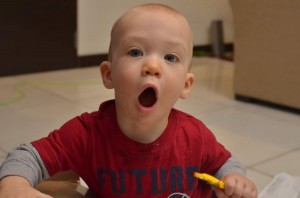 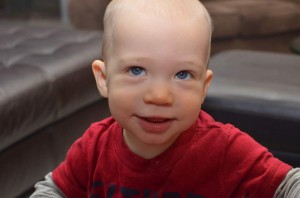 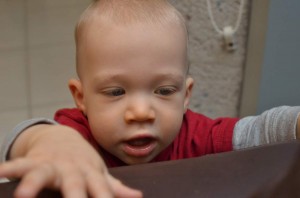 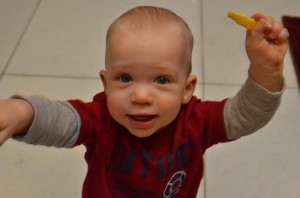 I love this face. 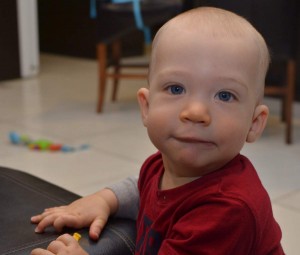 < A guaranteed return on your investment
Elliott’s Birthday House Build >