He’s not a baby in a cradle anymore…

By Susanne, In Elliott With 4 comments

On Elliott’s 8 month birthday (November 20), he woke us up bright and early (as has become tradition ever since living in the Dominican Republic) at 5 am. How did he wake us up? Not by crying. But by standing up in his crib, walking himself around 2 corners and 3 sides to get to the side parallel to our bed, pulled the blanket out that we tuck underneath the mosquito net so he can’t see through the side of his crib (so if he wakes up early and we’re not ready to get him, he won’t see us), and peered his beautiful blue eyes which were brimming with a huge smile over his neon green pack n’ play. 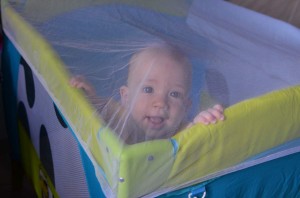 And the line from a Misty Edward’s song rang through my head with slightly different lyrics: “He’s not a baby in a cradle anymore…”

He has certainly grown up this month! Elliott has accomplished so much in his 8 months of life!

elliott has now been to three different countries!

The good ol’ US of A, Mexico, and now the Dominican Republic! This is us at the airport, about to get onto a red eye flight to Miami, where we laid over for a couple hours and then hopped on over to Santo Domingo. 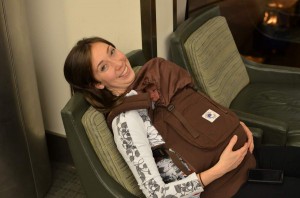 Getting a little sleep before hopping onto the plane… 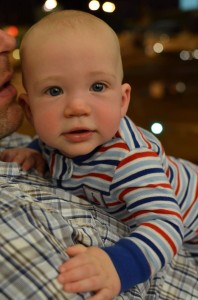 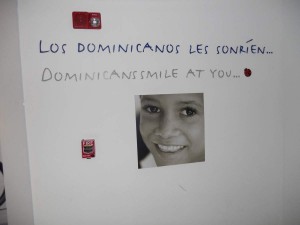 This is the sign that greeted us upon our arrival 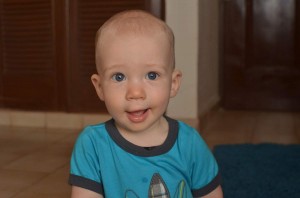 I think Elliott looks just like the Dominican child, don’t you?

So, I”m not quite ready to say that he’s entirely waving on purpose, but it sure does seem like he is! For a few months he’s had this habit of hitting something over and over with his right hand…he loves discovering things like that. But just in this last month, he’s been doing that same motion in more of a “wave” right when he greets someone. Here he was “waving” at me while playing with one of his new bffs, Jose Luis. 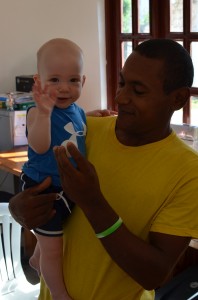 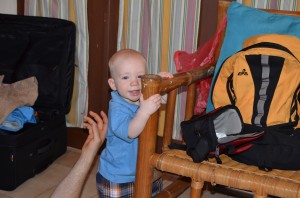 I’ll be honest…the tile floors FREAKED me out when we first got here…Elliott had just learned to crawl a few days before we got here and so I was terrified we were going to end up in the ER in need of stitches. But–it’s been so incredible to see how well he’s learned how to move, and how much more in control of his body he is! We rearranged our room so he could have a fairly big space to crawl around without too many sharp corners and laid a mattress down on the ground so he’d have a padded place to play, too. He climbs up (and down!) on the mattress with incredible ease…I am so impressed. 🙂

Elliott’s starting to have “favorites”…which, of course, are mostly the things that are not ACTUALLY toys! He’s also started carrying his toys with him everywhere he goes. I think it’s the cutest…he crawls and climbs with his toys in hand, and if he drops one, he always goes back to get it… 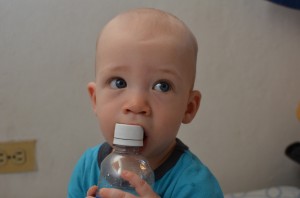 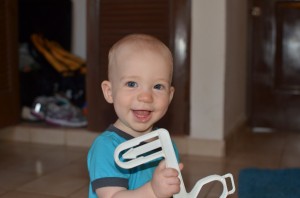 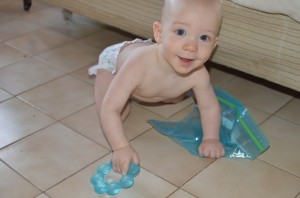 this ziplock bag (and his teething ring) 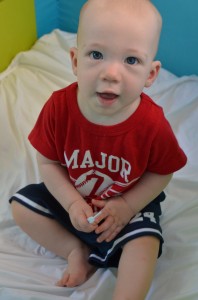 Not pictured is one of his very favorites: a used package of wipes. What can I say? The kid loves plastic. Some of his favorite “real” toys are… 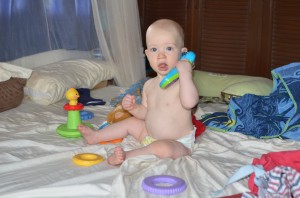 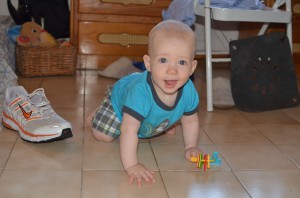 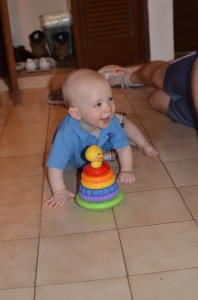 I’ve been calling Elliott “Mowgli” this month because he walks just like him! Isn’t this hilarious? I think it could be because of the tile floors, but who knows…

Will the real Mowgli please stand up? 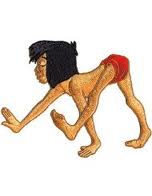 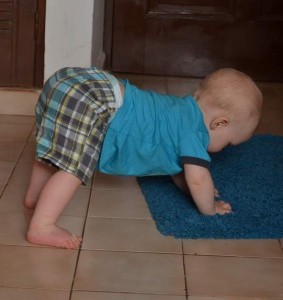 I think I might say this every month 🙂 but one of my favorite parts of this month is just laughing with Elliott…Ahh, it’s the best!! I think he has the best sense of humor! The other day he was crawling under the desk and “hiding” so I was playing hide and seek with him and he just thought he was the funniest creature on earth every time he’d “hide” himself under the desk and I”d “find” him. We play so many fun games like that all day long…it is the best. We laugh so hard every day!!

One of Elliott’s favorite “laughing friends” is Jose Luis…I’ve never seen Elliott laugh as quickly and naturally with anyone like he does with Jose Luis. It is so fun to watch Elliott make new friends! 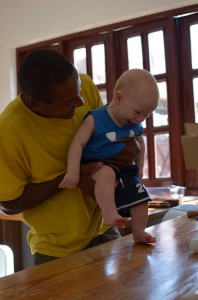 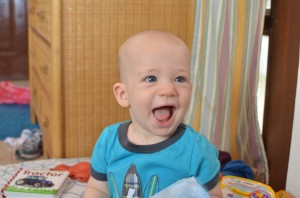 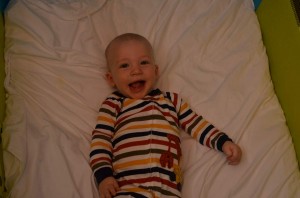 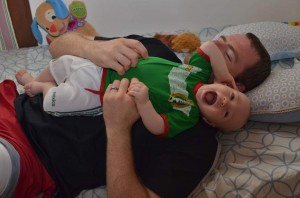 It was bound to happen eventually, right? Elliott was playing on the floor like usual and I think he just got ahead of himself and went face-first into the tile ground. He only cried for a few seconds, but as I pulled his head away from my shoulder after comforting him I saw this HUGE fat lip…so sad :(. It’s pretty hard to see in this picture, but look at the right half of his upper lip…little puffy lip :(. It was back to normal the next day. 🙂 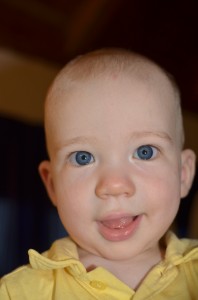 For sure impossible to get a picture of it, but Elliott got his third and fourth teeth! He got his right and left incisor. The top two middle teeth are showing through the gums so they can’t be too far behind! 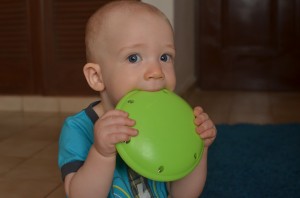 He continues to chew on EVERYTHING…

And fnally, a few of my favorite cute pictures from this month… 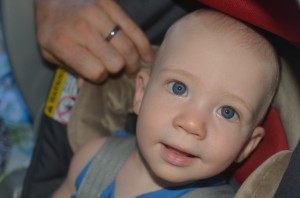 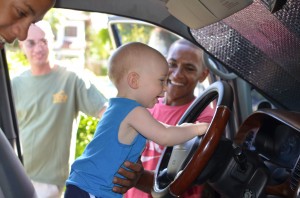 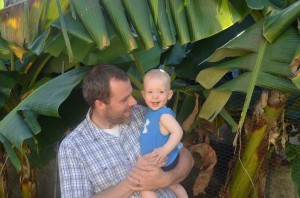 < Welcome to the Caribbean!
You know you’re a missionary in YWAM San Pedro when… >