By Susanne, In Elliott With 2 comments
Okay, be warned.
I am totally becoming “that mom.” In a lot of ways. This month, I have said that about myself on multiple occasions…I feel like every time I turn around, I say to myself with an eye roll, “Oh, Susanne…you are totally ‘that mom’“…
Like, a FANTASTIC day is a day that I get to stay home all day and just take pictures of Elliott. I’ve taken almost 400 pictures of Elliott. In the last 25 days. I can see it coming now though…“that mom” who has a billion (literally) pictures of her first kid…
Like, I’ve taken a ton of videos of him this month. That would be extremely boring to 99.9% of the world. But I think they are wonderful. I can see myself being “that mom,” showing these to Elliott’s first girlfriend (when he’s 25) and oohing and ahhing over them, not realizing that she doesn’t care about watching a baby sit on a play mat and do nothing for 20 minutes…
Like, he’s over 3 months old now, and we’ve only left him with someone once…for about 90 minutes, when he was 2 weeks old. I never thought I’d be “that mom” that never leaves her kids with anyone. In my defense, it really has happened accidentally. I just never want to be away from him, so–naturally–it never occurs to me to leave him. The thought of checking him into the nursery at church is like thinking about sending him off to boarding school…no way!! In my mind I feel like we just had him yesterday and so we have “plenty” of time to practice leaving him with other people…But somehow, 3 months have slipped by soooo quickly…
So, all that to say, I’ve posted a few videos here, and I want you to be warned before clicking on them. These are actually the best ones of them all :). But I haven’t figured out how to cut the videos down to the relevant length let alone edit them yet, so….”some” people might think they’re kind of boring… If that “some”one is you…don’t judge me :). If you’re easily bored, I would just look at the pictures and NOT click on the videos.
But if you want to see the cutest baby ever doing the cutest things ever in a perfectly cute amount of time, then I would definitely click on the little videos below…
Here are some highlights from the last month:

Though I don’t have a picture of it, Elliott is officially in his crib full time. In fact, this month he has become very aware of his crib, so when I put him down for a nap, he recognizes his surroundings and starts to protest instantly. His eyes look to the left, then to the right, then they get HUGE and he looks at me like, “Noooooo!!!!!!” It’s devastatingly cute.

Elliott got to meet two of my dearest friends this month!

This month Elliott learned how to push his shoulders off the ground during tummy time! 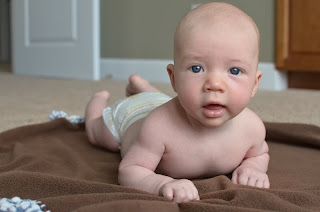 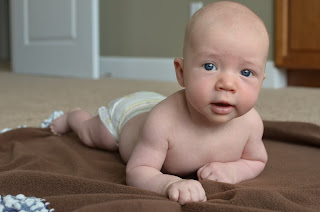 He loves clasping his hands, and shoving them both in his mouth. So cute, until he gags on them…which is a fairly common occurrence :). 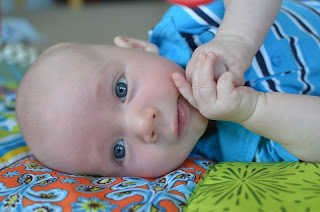 He learned how to roll over from his back to his front! He has been soooo close, and he finally just did it officially with absolutely no help on June 24. A couple weeks ago he learned how to get to his side and then he’d roll onto his tummy but his arm would get stuck underneath him and he wouldn’t be able to push himself up. June 24 was the first time that he rolled to his side, rolled to his tummy, AND got his arm out from underneath him! Yay, Elliott!! Here are some funny pics of him “getting stuck” on his arm: 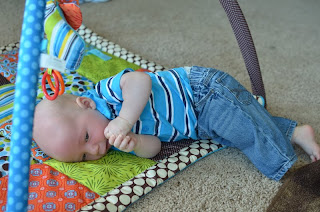 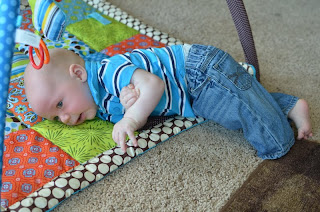 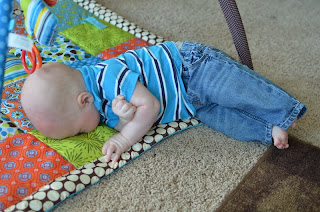 On June 20th, when he was exactly 3 months old, he (for the first time) got his arm out from under him when on his tummy, but I had to help him with the first half, as you can see.

On June 24th, he did it all by himself! Although I didn’t get video of him rolling to his side on his own, I promise he did :). This video is hilarious, by the way. He chokes himself a couple times before we get to the interesting part…like I said, I don’t know how to edit video yet :).

Elliott talks to himself all the time and has this incredibly cute giggle! We LOVE it! Delightful squeals have filled the Moberg home this month! I haven’t been able to get a great video of him talking, but this is not too bad. Here is a little sample of him talking:

And here is a video of him singing with his dad….it’s a long one, but worth every minute of your time…soooo cute!

Elliott is just beginning to learn the concept of grabbing things. He still mostly does it by accident, but one evening he grabbed Brian’s nose over and over and over again, and it looked pretty intentional! It’s a start :). 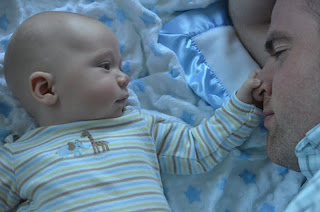 And finally, here are a few more random pictures from this month that are too adorable not too post! 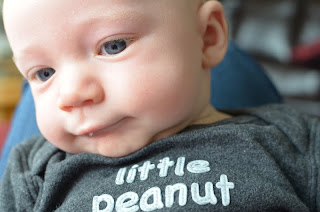 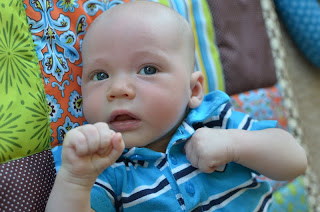 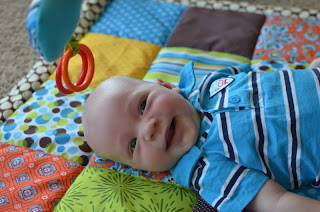 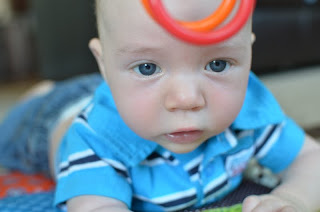 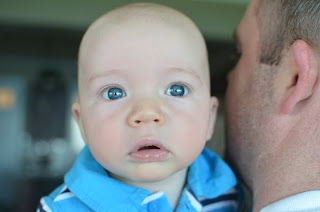 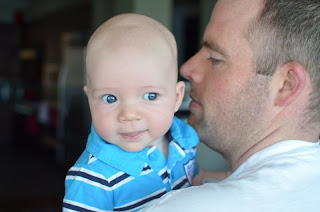 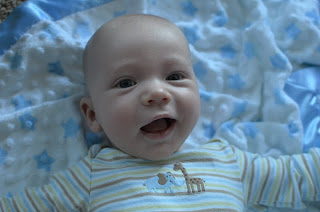 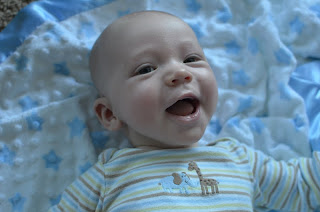 Elliott Brian, you are our joy and our pride! We love you! Happy 3 months!!