By Susanne, In Elliott, My Crafty Side, Party Time With 3 comments

Elliott turned 5 on March 20–a phrase he has been telling EVERYONE he has met for the last 8 months or so: “Hello, my name is Elliott and I’m turning 5 on March 20th!” To which the person would almost always respond, “You’re 25?” To which I would jump in and correct, “He’s TURNING 5…” Hahaha! I think we’ve had that conversation at least 100 times with various strangers in various places!!

He requested going to breakfast at Mimi’s (“I want to go to the breakfast place where we sat by the emergency exit and had apple sauce!”). We wrapped up a couple presents for him and Selah helped wrap hers. He got to open one first thing in the morning and then we hid Selah’s present and our other present for him in his car seat to find on the way to Mimi’s. 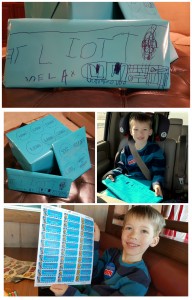 Can you see the train Selah drew on his present? She and Elliott are sleeping in the back. I was so impressed! We made him his very own return address labels, personalized with his name and a picture of him at Lego Land! 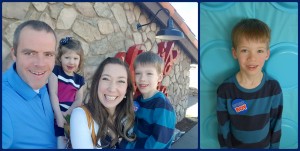 Elliott’s new favorite color is blue-ish green, with navy coming in at a close second. I had just found this shirt on the clearance rack At Gymboree for $2!! Win!!!! Perfect birthday shirt!!!

That afternoon, special guests Grandma, Grandpa and Aunt Angela drove in! We packed them back up in the car and headed to Grampa & Nonna’s house for the Mauss family birthday celebration.

Now, for his actual birthday party…this is the party he’s been planning for well over a year. Last year I was thinking he would want to have a Lego birthday, but he approached me in January telling me he wanted to have an animal birthday party. When I suggested a Lego party he responded, “I would like to have an animal birthday this year and a Lego party next year when I turn 5.” What can I say…the child has my party-planning blood in him!!!! So the last time we were at Lego Land, I was sure to take lots of pictures of our boy in preparation for his 5th birthday party!

One afternoon I showed him lots of pictures from various Lego parties and we talked through what exactly would bless him at his party. He has very strong opinions about what he wants! 🙂 One of the first things we did was design this shirt together. He told me exactly what he would like (a light blue shirt with a dark blue lego guy, but with a hat, and he wanted the lego guy to also have a light blue shirt). I designed the CUTEST little Lego guy with a hat, but Elliott didn’t like how the bill went to the side…so we ended up with this…which I tried to strongly urge him to go with the sideways hat instead, but he was insistent on this, because “the bill goes in front, not on the side.” I think it looks like a helmet 🙂 but he loves it! So…win!

Elliott and the helmet Lego Guy!

The next thing we did was make a zillion lego crayons out of all of our crayons for party favors.

His favorites were the multi-colored ones, so we made sure that everyone got one of those, too.

Next it was time to work on invitations. Oh my, these were too much fun to design and the kids had a blast making the outsides look like Legos. One of the things Elliott was insistent on was that the party colors were: blue-ish green (turquoise), light blue and dark blue. So everything from the invitations to the decorations were in those colors. We had a picture of Elliott with Emmett and Brian figured out how to make the background transparent and I put together this little ditty: 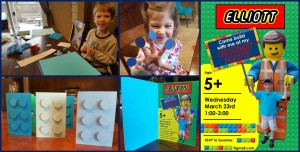 Elliott punched out the dots with my circle punch and put foam stickers on them. Selah played around with the dots for a while and then helped attach them to the actual invitations :).

Next up, we worked on painting this Lego Man together, and of course, the kids had to make sure he “worked”! And, as you can see, we decorated the doors to our craft room to look like Legos, along with our front door. 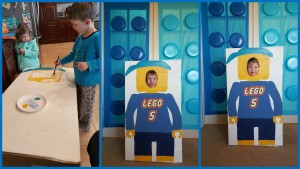 I convinced Elliott to let me draw the hat “sideways” so it actually looked like a hat :). I sketched him out on a box that I had painted white, and Elliott painted (most of) him inside the lines I sketched. 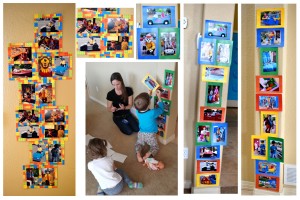 Next up, I printed off tons of pictures of him from Lego Land and put them on Lego brick backgrounds, and then the kids “built” Lego towers out of the pictures on the walls.

Brian framed these two pictures of Elliott at Lego Land out of Legos! 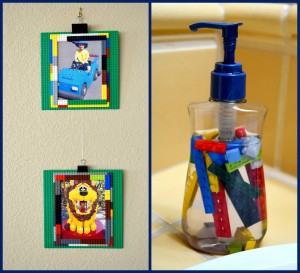 And how can you have a Lego Birthday party without Lego soap?? 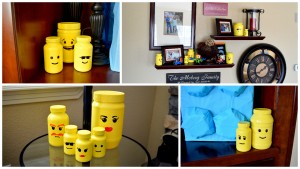 I think they are adorable!

I printed off the Happy Birthday Lego sign from here. I covered our t.v. and two boxes with Dollar Store tablecloths, then wrapped paper bowls with the tablecloth scraps and taped them onto the boxes. And thanks to the Blizzard that blew through on Elliott’s birthday party day (more on that in a minute!) I got the idea to cover up the picture that normally hangs on our mantle with the last tablecloth I had left and printed out the Elliott 5+ sign. Also, we used the scraps leftover from his birthday invitations to make the multi-blue colored Lego banner. 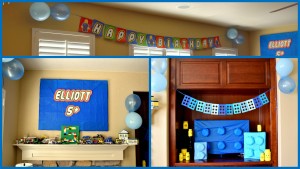 And with that, our living room was ready to go!

And THEN…a blizzard blew in on the morning of his birthday party!! On the third day of Spring!! And it was a bad one…we realized within a couple hours of waking up that no one should be on the roads. So a hundred text messages later, and we were able to move the party to the next afternoon. Elliott was pretty sad, but after agreeing to let him put together a practice Lego Man (the first craft activity of the party) he was in much better spirits :).

And Aunt Angela makes everything better 🙂

And THEN…he got to open his gifts from Grandma & Grandpa and Aunt Angela….. 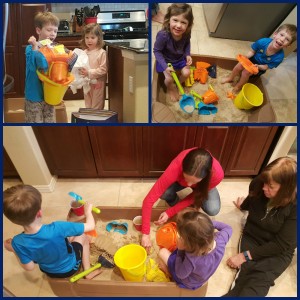 A sand box and sand toys! The kids had a BLAST playing in the sand box on our kitchen floor…while the snow and wind beat on our house outside!

Which meant I had all day to keep thinking of new Lego ideas and finishing up the old ones I had had…it’s a good thing we didn’t have TWO snow days or this party would have been out of hand!!

We got the favor bags all ready to go. I designed, printed, and cut out the Lego circles with my Silhouette and Elliott attached them to the bags with foam stickers. Each friend got a lanyard and Lego badge with their name on it, a laminated tag with their name, a Lego notebook, Lego crayons and a Lego coloring book that I put together. 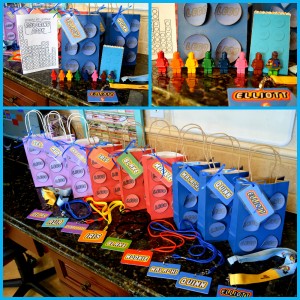 We set out the food and drinks. We looked through several different types of Lego cakes, and Elliott really wanted the kind with M&Ms on them, and he really wanted it to be blue. Brian is *highly* opposed to food coloring, so after doing a little research we picked these up at Whole Foods. They are made from vegetables so there is nothing artificial in there. I thought they worked out great and were a great alternative to food dye. The colors are not nearly as bright and bold as regular food coloring but they totally accomplished their purpose! These Lego Brick cakes were definitely challenging for me to make as I’m not super gifted in the baking arena and the frosting didn’t turn out as smooth as I had imagined it would 🙂 but Elliott loved them and that’s all that matters, right!! I also whipped up some Rice Krispie Lego Treats to have a gluten free option on hand. 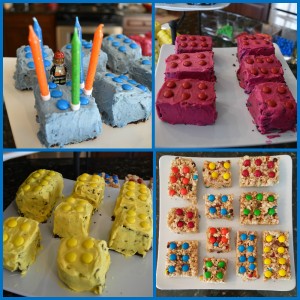 Elliott wanted a Lego man on his brick, and he picked a firefighter…in case the candles got out of hand, the fireman would be there to assist 🙂 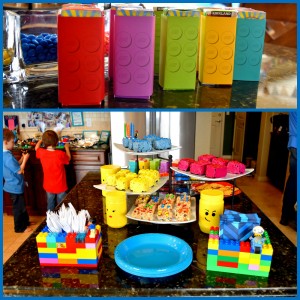 We wrapped juice boxes to look like Lego bricks (downloaded from here) and Elliott and Selah built the fork and napkin holders!

And now for the actual PART-AY!!!!

Guests arrived and Elliott handed them their Lego badges to wear. The first activity was creating your own Lego guy, which I cleverly re-named “DO YOU WANNA BUILD A LEGO GUY?” in honor of the Blizzard the day before. (Get it??? Sung to the tune of “Do you wanna build a snowman?”!!) 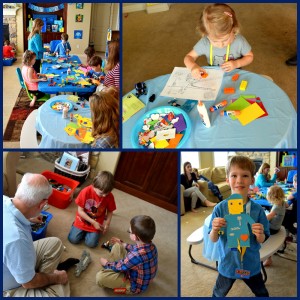 We had yellow Lego guy cut outs (thank you, Silhouette!) with shirts, pants, hats, stickers, googly eyes, crayons and markers so the kids could decorate them. They didn’t put as much effort into them as I thought they might (note to self: most 5 year olds are not as into crafting as my son is!) and some finished as quickly as possible so they could play in the bin of Legos on the floor :). We also had several Lego coloring sheets set out as well.

Here are some of the finished Lego guys sticking up out of their bags…cute!!!

Next up was Pin the Head on the Lego Guy. This game is always such a hit!!! The kids each decorated their own Lego head and then took turns trying to pin it onto the headless Lego man. Everyone was cracking up!! 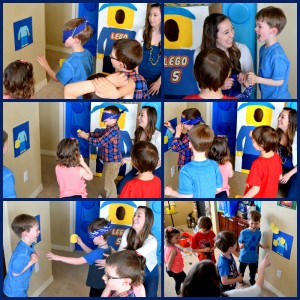 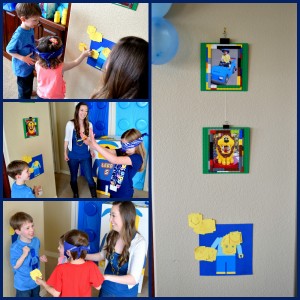 Then we played Lego Bingo. I downloaded the Lego Bingo cards from someone else who had designed them, but we changed up a lot of them because, as Elliott puts it, a lot of them “don’t bless God.” It’s true. What is with the terrifying Lego pieces that are out there? Anyway, it was cute because we used pictures of Elliott at Lego Land and it made the game a lot more fun and personal. 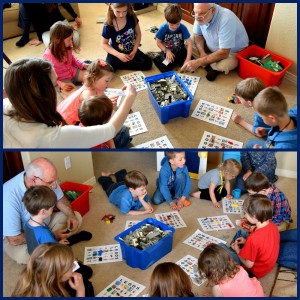 We used Legos for our markers and this game was also a big hit!

Then we had a spoon race…which team can carry the Lego pieces on a spoon into the Lego head the fastest? 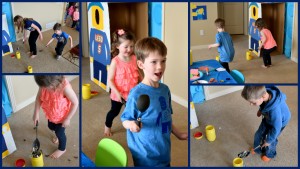 And finally, Lego Creationary: each child builds something out of Legos and the other kids try to guess what it is! This was fun!! 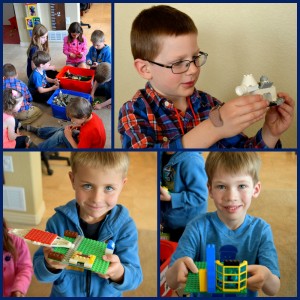 Then it was cake time! 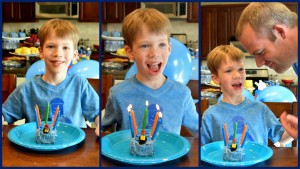 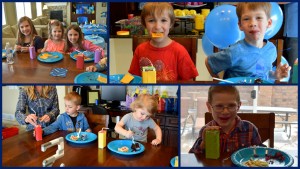 And I almost forgot on the day of, but thankfully Elliott reminded me! Presents! 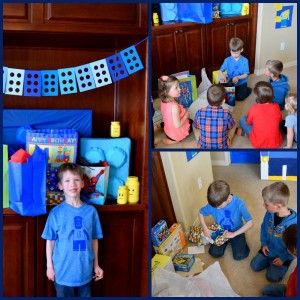 And everyone got their photo in the Lego man, of course! 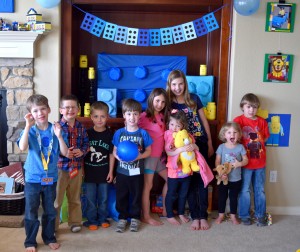 What a fun group of kiddos!! 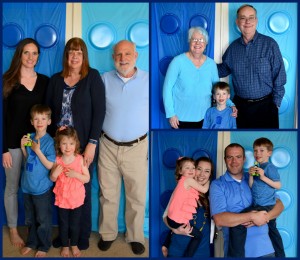 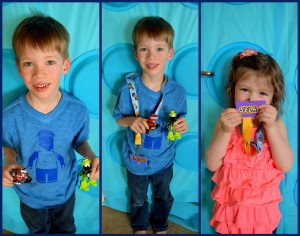 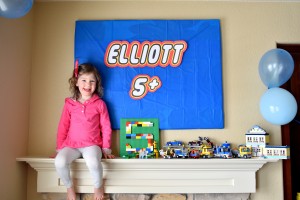 And of course Selah wanted a picture up there, too 🙂 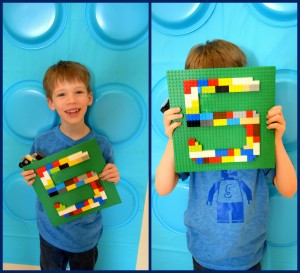 And as if we hadn’t had enough fun, that night we went to Red Robin for his free birthday burger! 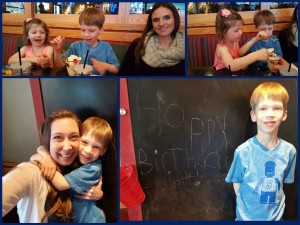 (And in case you’re wondering…yes, he already has his parties planned out for the next 4 years!!!HA!!!!)