By Susanne, In Selah With 3 comments

Selah B turned 4 months old on February 8th. Sorry to make you wait for the very exciting happenings in this 4 month old’s life!!

She is just the sweetest little thing…I can hardly handle her sweetness. She loves people. She hasn’t been so good with the camera because she will ONLY smile when she sees someone’s face (but I’ve managed to catch some good photos this month…). My favorite thing to do is stare at her while she’s playing, and wait for her to catch my eye. As soon as she does, she smiles SO BIG. It melts me every time.

This has been a month of milestones! Just after her 3 month birthday, she started rolling over! I had set her on her tummy one day (January 13, to be exact!), walked away, and when I came back, she was on her back!! I screeched with delight and snapped this quick picture on my phone for proof. (Cute pjs provided by Aunt Bev and Uncle Roy, and cute hat provided by Auntie Melisa!) 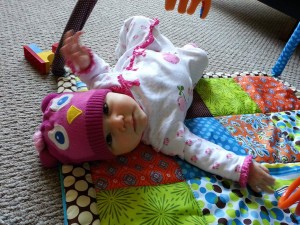 “Whew! That was exhausting!”

I put her on her tummy and encouraged her to do it again so I could get it on video but she sweetly refused. I, of course, called her daddy right away to tell him the good news. Later that afternoon we were playing with her and she did it again, this time while we were both watching! She did it again and again, and so I finally pulled out my phone. Here’s this silly little video of her rolling over. I was certain she wasn’t going to roll over because I finally had the camera out, so my reaction is hilarious. As a result, Elliott thinks this video is hilarious and LOVES watching it over and over again.

Next new trick: Turning in circles! No matter if she’s on her tummy or her back, she turns herself in a complete circle. She loves to move!

Next milestone: Sleeping through the night! Yahoo!! Attention all moms of infants out there: if you’d like to get your baby to sleep through the night, I have the fail-proof way of doing so. Read my story below, and follow the steps carefully to achieve a full night of sleep for the first time in A YEAR (if your pregnancies are anything like mine!).

We were almost 2 weeks in to staffing the DTS, and we had the most incredible full schedule imaginable. We were very, very busy. But this particular Thursday morning was the most busy, most exhausting day that I had had yet. I was on the tail end of being sick, and it was WINDY out. Like really, really, really windy out. Like the windiest day in the entire history of planet earth. And I decided that would be a good day to walk to the base with Elliott. Now, it’s important to note that the walk to the base is entirely uphill. Short, but uphill. And Elliott decided he didn’t want to walk. And it was windy. Did I mention it was windy? Like really, really windy. So as I was pushing Elliott UP, UP, UP the hill in the stroller, the 100 mile an hour winds were pushing  DOWN, DOWN, DOWN against me! So after this 15 minute walk of straight uphill, into the wind, my body was wiped. (I may not have muscles of steel quite yet after carrying and birthing a baby.) So I wiped the sweat off my brow and proceeded to Elliott’s little “preschool”, where I was going to teach a short lesson for the kiddos. I played with them for a bit, taught my little lesson and then fed sweet Selah B who had been napping in her little secret room on the base (don’t worry—Brian was watching her on the monitor!). After getting both the kids home and Selah down for a nap, I fed Elliott lunch. While he was eating I tore through the house like a tazmanian cleaning devil, because a group of girls was arriving in just an hour for a small group. I put Elliott down for his nap, the girls arrived for small group, and my friend Amanda and I led the time. They left, and I sat down to prepare for my teaching that night with the DTS Staff. Dinner, kids, nursing, playing, and burning brownies all happened before our friends arrived at 7. I taught for a couple hours and by the time everyone left, it was 10 pm. And I was EGG-SAUCE-TED. The most egg saucy this nursing, not-sleeping mama had ever been.

Still tracking with me? Because this is where the key to the story is:

I got ready for bed, put my ear plugs in (like normal) and—here it is, don’t miss this—I forgot to turn Selah’s monitor on.

Earplugs are the greatest gift known to man for me because they drown out my husband’s occasional night time noises (aka, snoring) and Selah’s little tosses and turns that generally wake me up and convince me that it’s a good idea to stare at her while she’s sleeping soundly. (You know, just to make sure she continues to sleep soundly.) Earplugs make it so that I only hear her through the monitor when she needs me, when she’s actually crying. Which, typically has been happening once a night.

But if I fail to turn the monitor on…I fail to hear EN-EE-THING.

Well, you’d better believe this tired mama slept oh-so-soundly until…I woke up at 6 am on my own, checked the time, and panicked. Why hadn’t Selah cried? I looked at the monitor, realizing it was not turned on to her room, and panicked again. Oh, no! Had Selah cried??!! I turned it on to her room, saw her sleeping soundly and peacefully, and panicked again—because I didn’t know what else to do! I quickly woke Brian up, telling him of my horrible mistake as I was, of course, panicking.

“Well, she is NOW, but I have no idea if she cried all night long!!”

“Yeah, she looks pretty troubled to me…” he said as he looked at the peacefully sleeping babe on the monitor.

And Selah has slept through the night ever since. So there you have it, folks. I felt TARE-I-BULL…but, truth be told, I am quite enjoying sleeping through the night. And, I don’t think she’s holding it against me :).

Well, here she is: my rolling, sleeping, smiling, bundle of baby girl perfection: (P.S. As a little bonus, I added some pictures of Elliott when he was this age for a little compare/contrast!) 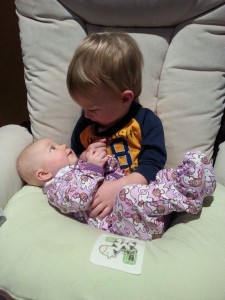 One of her favorite things to do…stare into the eyes of her big brother! 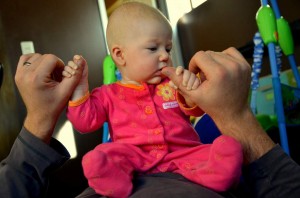 The princess sitting on her throne…daddy’s tummy! 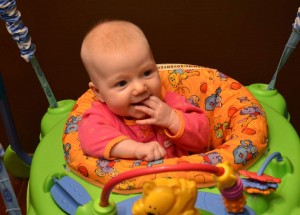 She loves chewing on her fingers! 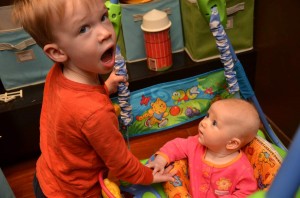 She adores her big brother…

Speaking of her big brother, here’s a little flash from the past: She started really intentionally playing with the toys on the exersaucer… 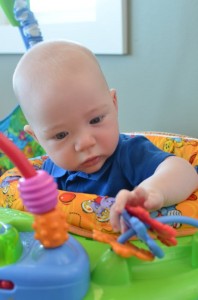 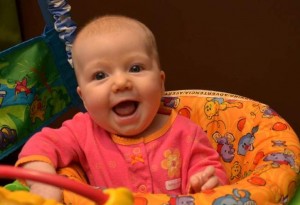 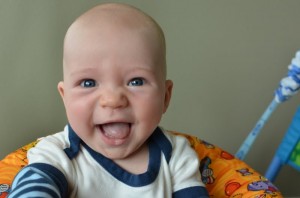 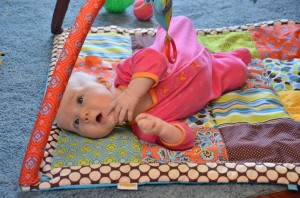 She is so close to rolling onto her tummy–I’m shocked she hasn’t yet because she so often rolls herself all the way onto her side to play. 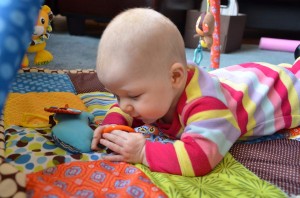 She really likes playing with her toys… 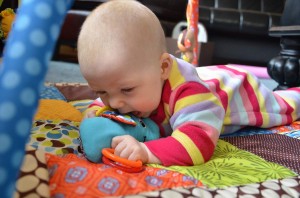 Her feet are her newest playmates this month! 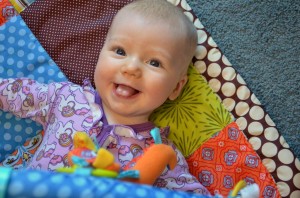 And, she discovered how cool her tongue is. She loves sticking it out of her mouth, especially when she’s smiling! 🙂

Now, just for a fun bonus, here are a few fun faces from our sweet, 4 month old Selah B: 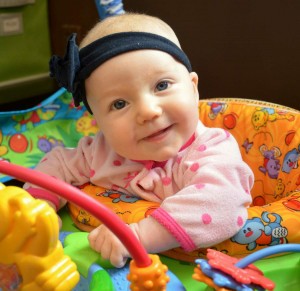 Elliott picked this headband out for her to wear one morning while still in her pjs. I think she likes it :). 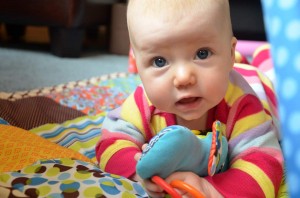 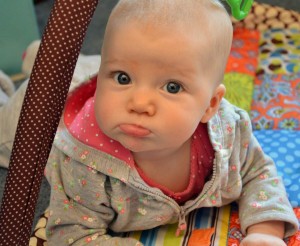 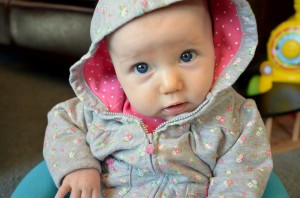 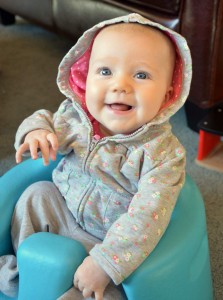 Baby girl is growing up so fast!!

Okay, one more flashback for you… 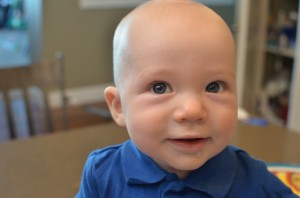 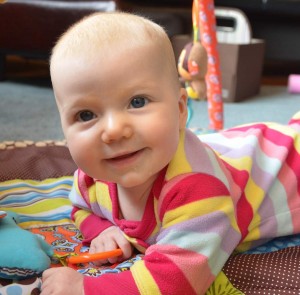 Okay, okay…so I guess I’m starting to see that they look a little bit alike :). Happy 4 month birthday, Selah B!!!