There are so many milestones that happen between 6 and 7 months! Elliott started eating solids and has become a super confident mover! He can make his way anywhere he wants to–and quickly at that!

I’ve been telling new moms the secret to getting their child to crawl: put them in a room where they’re not supposed to touch anything…and they will start crawling!! Elliott’s been up on all fours and moving around since the 6 month mark, but one day I was packing up a room filled with candles, glass vases, sharp objects (things like that) and I set Elliott down and he TOOK OFF! I’ve never seen anything like it! I told Brian he was like a ravenous beast. He was even making these “beast-like” sounds!! It was my first real glimpse of the true BOY in him, and I just loved it. I had never seen him move that fast, and he hasn’t slowed down since…

I tried to keep the pictures to a minimum this month :). But here are a few of my favorites from October…

seriously now, could he possible be any cuter? 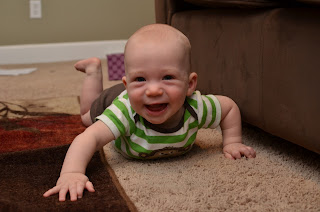 favorite faces of the month 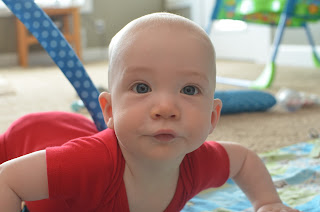 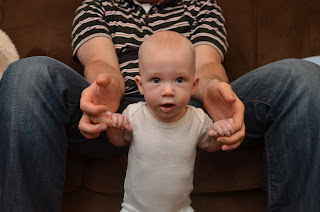 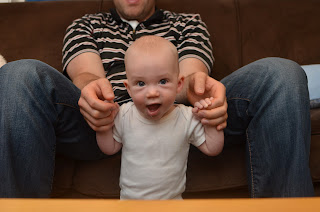 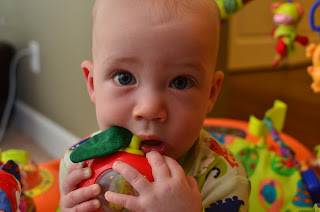 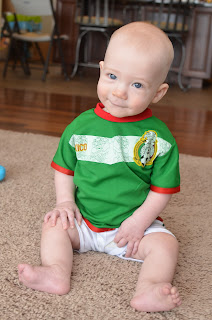 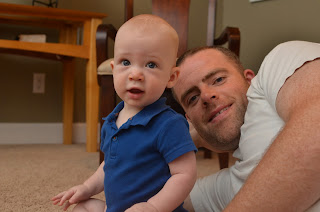 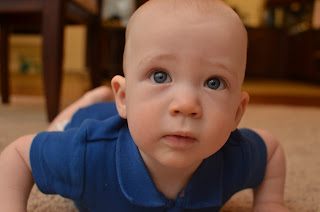 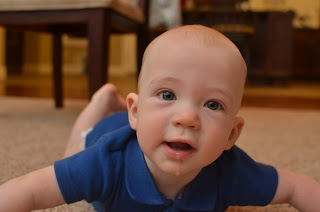 sippy cup drama
We tried the whole sippy cup thing for about 2 days because I read in a book that you’re supposed to (?!) and was so frustrated because all he wanted to do was chew on it, not drink out of it. Thankful for wise mamas who have gone before me to tell me he doesn’t need to be drinking out of a cup yet :). 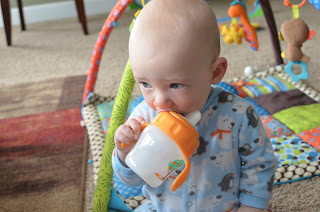 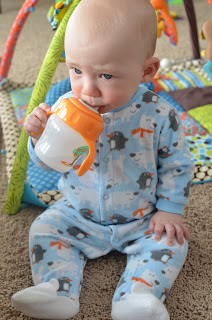 my confident, suave mover of a boy… 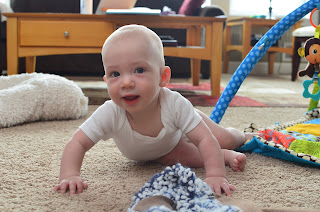 Elliott and I play this little game every time I put him down. I lay him on his back in his crib, and he instantly gets this HUGE smile on his face because he knows it’s time for our little game…He flips over on his stomach as fast as he can and I run to the door and peek through it and say, “Goodnight!!” or “Rest well!!” and all kinds of other sweet nothings and he just laughs and laughs for about fifteen seconds and then all of a sudden he’ll throw his head down and start sucking his thumb. That’s when I know he’s really ready for a nap :). So I decided to document it one day…this is as I’m peeking through the door at him… 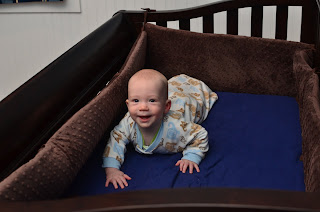 “crawling” (ish)
Here’s a little video to show you a little sampling of how he moves:
crawling for REALS!
So, the truth is, I had this post completely written and almost ready to post on the NIGHT of Elliott’s 7 month birthday. I was so impressed with myself. But I needed Brian’s help to upload the last video and, well, it never happened. So now that I’m ready to post it, I’m adding an update!
When Elliott was exactly 7 months, 3 days old, the little man decided it was time to REALLY start crawling. The awesome thing about that day in particular is that it happens to be the EXACT day that BRIAN started to crawl when HE was a baby! Isn’t that awesome?!
I caught a quick video of him on my phone the next day.
Happy 7 month birthday, my little love!!!
Tags: